In a previous post on this blog, I explained that the new CCK Museum wanted to locate copies of each unit patch worn by personnel assigned to Kung Kuan and CCK AB for inclusion in their new museum.
I found a copy of the 6217 USAF Hospital patch someplace on the Internet. 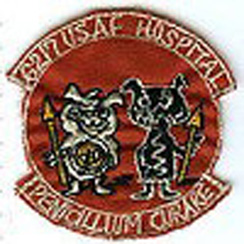 Today I received an email from a physician who was a Flight Surgeon at CCK in the late 1960s.
Here is what he had to say regarding the 6217th USAF Hospital unit patch displayed above:
"Actually this is an unofficial patch. I was a flight surgeon at CCK in 1968-69 and a couple of us flight surgeons were sitting around with a general surgeon one afternoon, and we all felt the hospital should have a patch as all the Tactical Air Squadrons at the base had their own. So we adopted the GNID stamp we had, with the 2 little figures and had a bunch of patches made up for ourselves. I don't know that it was ever made an official patch. Incidentally, the GNID stamp was to put on the charts of those who contracted a case of gonorrhea; the phrase at the bottom translates" penicillin cures."
..
"The 2 figures on the patch had on their abdomen area the representation of the microscopic organisms that  cause gonorrhea and syphilis, thus the slogan below."
"As I remember, we got the idea of a hospital patch one day after having a beer drinking contest at the officers club between the various Tactical Air Squadrons and the hospital team, each of them had their own patch.
..
The hospital team, of which I was a member, came in second in the contest; besting all but one other entrant."

Editor's Note regarding the patch:  i.e., if someone showed up at the CCK Hospital and was diagnosed with a venereal disease, the record of the sick call visit notation would include a rubber stamp on the form with the likeness of the 2 little fellows in the center of the patch.
Posted by Taipei Air Station at 4:47 PM