A family member posted this photo on Facebook today.

You have to read ALL of the words on the sign to appreciate the thought than went into it.

Hope you're summer days are warm and fun!

The web site of the Fort Steele Campground in British Columbia, Canada. 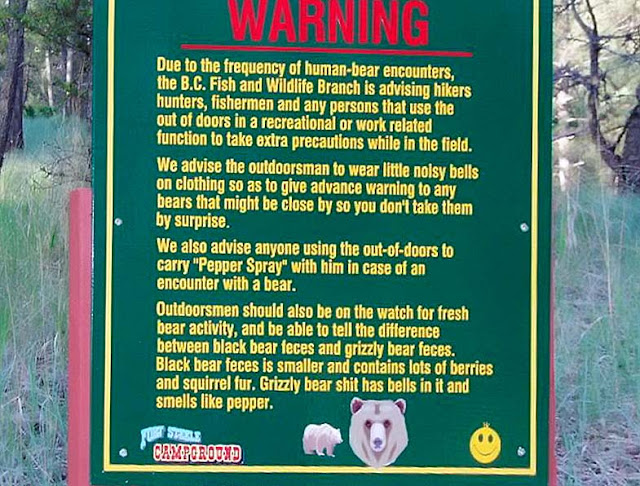 
Richard Eisen, stationed at Taipei Air Station in 1957-58,  recently checked-in with some interesting photographs of the Motor Pool area.

Richard's writes below:
I didn't work in the Motor Pool, but a good friend of mine was a dispatcher.
I worked in the Joint Operations Center (JOC)

There were two gates to the Taipei Air Station compound.  The gate near building #1 was for entry into the compound and was manned by a USAF Air Policeman.

The gate to the rear of Club 13 (building 7) and close to the motor pool dispatch shack and vehicle parking area was for exiting the compound.  It was manned by a Chinese Military Policeman.

During my assignment at Taipei Air Station, we were a very small outfit. Everyone knew each other.  We were so small that in 1958 when I cleared the base to return to CONUS, I accomplished all clearing actions while sitting at a table in Club 13, drinking coffee.

You can see that the majority of our vehicles at that time were Jeeps.

We also had a few weapon carriers, Duce and a half's, 5 ton tractors, all military type.

We also had some buses assigned that were used as shuttle buses between the compound and the hostels.  Blocks of wood were added to the clutch and brake peddles so the CAF drivers could operate them.

There were also only a couple of sedans.  The only one I remember was a 1949 or 1950 Buick that was General Dean's staff car.  The Buick was painted as a standard USAF staff car.

At Randolph AFB, before I was assigned to Taipei Air Station, the Commanding General also had a Buick staff car.

The Air Force had ordered our Buick at Taipei AS to be retired.  Because of it's good condition, the motor pool kept it operating until they were ordered by our higher headquarters to retire it.

(Editor note:  If you remember, it seemed the Taiwan Military utilized Jeep type vehicles everywhere.  Sometime after 1958, we changed from Jeeps to pickup trucks and sedans.)

The Motor Pool was located between building 19 and the fence.

I'm not sure where the Motor Pool Office was located.  It may have been outside of the compound.  Maybe over by our Vehicle Maintenance facility, across the street, by Hostel 6.

Building 7, Club 13, appears to have been enlarged since 1957.  I don't recall that section on the rear of the building being there.  Originally the only things on that side of the building was the air conditioner equipment and a couple of small sections that extended out.

Also, the roadway along the rear of Club 13 was much wider in those days.


We miss the life we had while being stationed in Taiwan for two tours.  We haven't been back there in years.

Richard returned to Tainan Air Base in 1968, working in the Civil Engineering Office.

Thank you Richard for sharing your old photos and rememberances.

If you have something to share of your time in Taiwan, please write to us.

The history of our days in Taiwan will disappear if we don't keep it alive.


Posted by Taipei Air Station at 12:57 AM No comments:

What's all the Taiwan student uproar about?

There have been student demonstrations in Taipei for the past weeks.

In today's Taipei Times newspaper, Sunday, April 6, 2014, published in English, I read an article which explains, in simple terms, why, most of these students are demonstrating, for their lives!

Of course there are other things involved, but one of the probable outcomes of the "Pact" is clearly described in Mr. Chang's article below..

I believe you will have a better understanding of the situation after reading the article:


There are number of other articles in today's Taipei Times Newspaper discussing the situation.


Posted by Taipei Air Station at 6:17 PM No comments: