The file name of this photo was "Baby Carriage."

After translating the sign on the pole just above her, I realized that the photo fit the sign.

During Chiang Kai-shek's life time, the island was plastered with signs of all sorts. Some of those signs have shown up in photos on this blog.

Many of the signs spoke about the Russian and Chinese Communist regimes.

Here, the sign talks about having babies, building the population to make Taiwan strong.

With a strong population and military, it was Chiang's determination to re-take CHINA...

The baby in this photo would be 60 years old today.
UPDATE  - 9 January 2014
Photo rotated to allow Chinese charters to be read. 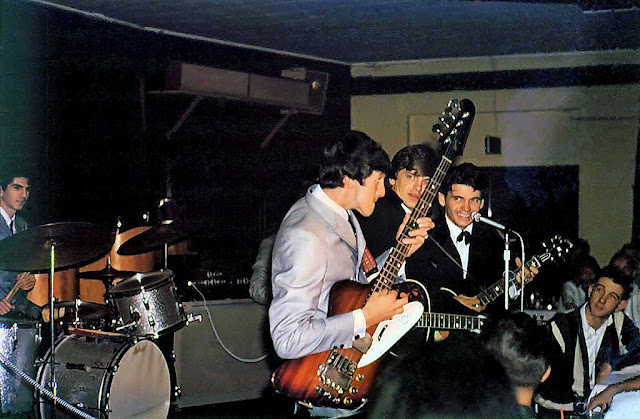 Just about every group that landed in Taiwan, made their way around town to the various military clubs, then headed down island for Taichung, CCK and Tainan.

Many of the older folks who read this blog will remember this famous group, The Everly Brothers.

Does anyone remember seeing this show, they were at Club 13 sometime in 1965 or 1966, or maybe you saw them at another club some where on Taiwan..

Our photographer, Rick Ferch had a front row seat that evening at Club 13.

HERE is the Wikipedia page on the group.

I came across these old photographs this afternoon, it's been awhile since I really took a close look at them.

This old black and white photo captured just about all of the old and new buildings, we were all familiar with.

If you look closely, you can see the beginnings of the Keelung Overhead Expressway being cleared, look just this side of the old Cotton Building or the 2165th Communications Squadron (Group).

The old mess hall and barracks, the swimming pool, post office, dispensary and dental clinic and other building were still standing.  I'm not sure if they were still being used when this photo was taken.

Don't know when the remaining "old" buildings were removed, anyone remember about when?

If you look closely, there are a number of tall palm trees standing just to the right and above the swimming pool.  I believe some of these trees are still standing today. 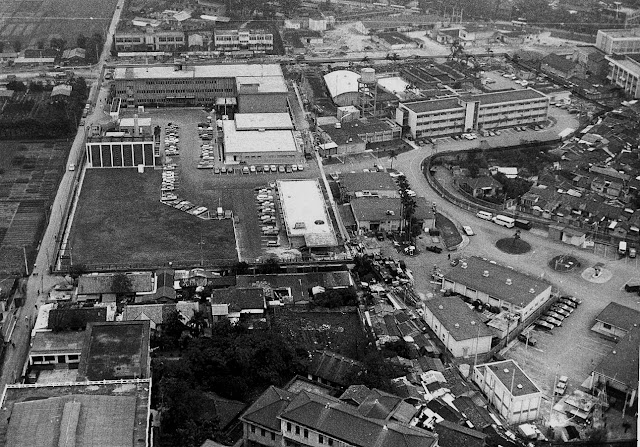 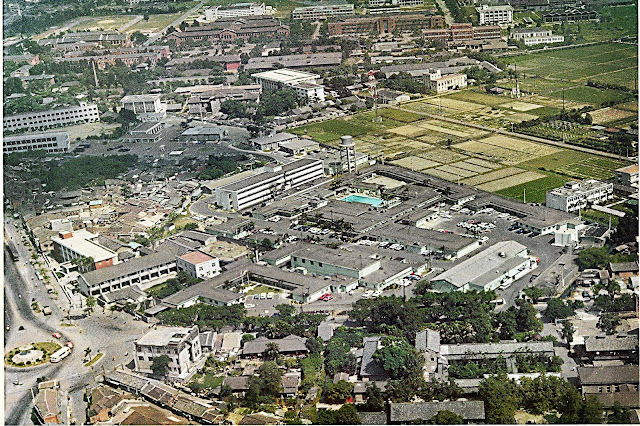 Click on these photos and they will open in larger sizes.

Take a look at the 4 videos below.

What you see on the films is all that is left of Taipei Air Station.

2.  A look from 10th Floor down on the area where Taipei AS once stood.

3.  A different view from the 11th Floob and Barr

4.  Walk inside the NCO Club and Barber Shop

Were You Residing in Taipei during the March - May time period in 1957?

I was recently contacted by Stephen Craft.  In his mail, he wrote:

"I am presently writing a book about the Reynolds Court Martial of 1957 and the subsequent riot."

Mr. Craft is interested in talking with anyone who was stationed in Taiwan during that period of time.

If you are familiar with the incident, I am sure he would appreciate hearing from you.

Please E-mail us here at:  Taipeiairstation@yahoo.com  We'll forward your mail to Mr. Craft.

Below,  a document from the Office of the Historian, US Department of State, which details the incident and what followed.  You can read the document printed below or directly on the web site by opening the link below.

252. Memorandum From the Director of the Office of Chinese Affairs (McConaughy) to the Assistant Secretary of State for Far Eastern Affairs (Robertson)1

On March 20, 1957, Robert G. Reynolds, an American Army Sergeant attached to the MAAG shot and fatally wounded a Chinese, who, the Sergeant alleged, was peeping at his wife in the bathroom and when confronted by Reynolds attempted to attack him, with the result that Reynolds shot him in self-defense.2 The deceased was a clerk at the KMT political school at Yang Ming Shan and left a young wife and an infant daughter. The United States military authorities issued a press release on March 21, stating the Chinese and United States authorities were investigating the case and would make a report.


The incident was picked up in the local English and vernacular press and led to much speculation. The general tone of the press was unfavorable to Reynolds; there were allegations that the killing was a deliberate grudge affair and that the deceased and Reynolds had engaged together in black-market operations. At that time the Embassy reported that “some difficulty” was expected over the fact that two shots were fired, the second occurring after Reynolds had followed the deceased some distance from his residence. The Embassy also reported that the Chinese Ministry of Foreign Affairs had expressed concern over the case and appeared to expect that Reynolds would be court martialed. The case was also picked up in Chinese Communist propaganda.


Press comment continued generally unfavorable to Reynolds but ceased at the end of March, perhaps on instruction from official quarters. In the meantime, investigations were carried out by our military officials and by the Chinese officials. Under the terms of the MAAG Agreement, Reynolds enjoyed immunity from Chinese jurisdiction, and the case was to be handled by Chief, MAAG, under the procedures of the United States Military Code.


On April 9, the Chinese Procurator’s Office announced that its investigation had been completed and the results would be forwarded to the Embassy through the Foreign Ministry. The Embassy reported that this caused additional press interest mainly devoted to speculation as to how the United States military authorities would dispose of the case.


On April 16, the Embassy received the Procurator’s report and the physical evidence. The report held that the killing “was done with malice and not in self-defense”, a conclusion which the Embassy described as “unwarranted and gratuitous”. The Embassy noted in this connection that some circumstances surrounding the shooting might require further explanation and that the United States investigation was to be completed on April 22.


Formal charges were preferred against Reynolds some time late in April and on May 7, MAAG announced that the Chief, MAAG, had approved the pre-trial investigator’s recommendation that Sergeant Reynolds be tried by General Court Martial to “establish his guilt or innocence on the charge of unlawful and willful killing of a prowler in the vicinity of his home”. The Embassy indicated that information from MAAG suggested Reynolds would be tried on charges of voluntary manslaughter, and said the trial would convene on May 15, if the defense was ready, or on May 20.


Reynolds was acquitted on May 23. This decision was received with great dissatisfaction by the Chinese, the vernacular press made inflammatory statements, and anti-American feeling and demonstrations built up, culminating in an attack against the American Embassy around noon on May 24. Demonstrators entered the Embassy, smashed furniture, wrecked the building, transportation and communications. As a result messages from Taiwan are now being received through Taiwan Defense Command facilities. The USIS office is also reported to have been wrecked. It is variously reported that from five to nine Americans, including Embassy personnel, have been injured, one seriously. (Press reports state this was Alexander Boase, press officer.3 We have no official reports yet identifying the injured.) Since the police were not able to handle the demonstrators, the Ministry of National Defense called in troops and the last message from the Commander, Taiwan Defense Command, sent at 5:45 p.m., local time, expressed the opinion that the situation was improving. Taiwan Defense Command was being protected by Chinese troops.


Of incidental interest was the Taiwan Defense Command comment that Bob Brown of the United Press “had done his share to stir things up”. There was no further explanation.


Ambassador Rankin, who was in Hong Kong when the trouble started, returned to Taipei via CAT on the afternoon of May 24 and reported the Embassy was totally wrecked, all transportation was destroyed and communications were not functioning.4 We have no further details from the Embassy so far.5


1 Source: Department of State, Central Files, 711.551–Reynolds, Robert G./5–2457. Drafted in CA by Comiskey.
2 A full account of the shooting, prepared by American military investigators in Taipei, was conveyed in a letter of May 27 from General F.S. Bowen, Chief of MAAG, Taipei, to Admiral Felix B. Stump, Commander in Chief, Pacific. Bowen’s letter was transmitted by Stump to the Department of State on May 28 in CINCPAC telegram 280730Z. (Ibid., CA Files: Lot 60 D 648, 573 Riots)
3 Of the USIS.
4 See infra.
5 A full chronological account of the assault on the Embassy and the USIS office was transmitted to the Department by the Embassy in Taipei in telegram 1190, May 26. (Department of State, Central Files, 121.93/5–2657)