It was hot, sunny and humid as three friends and I met up at the Kaohsiung Metro, Word Games station, in north Kaohsiung, early on Saturday, October 24th.  My friends had driven down from the Taichung area, I rode down on the High Speed Rail from Taipei.

We came together to visit Tsoying Naval Base's "Open House."


Everyone then walked to a central point, close to the parking areas, lined up and passed  through a security check before loading onto buses for transport to the "Open House area" of the base, which was some distance away from the parking areas. 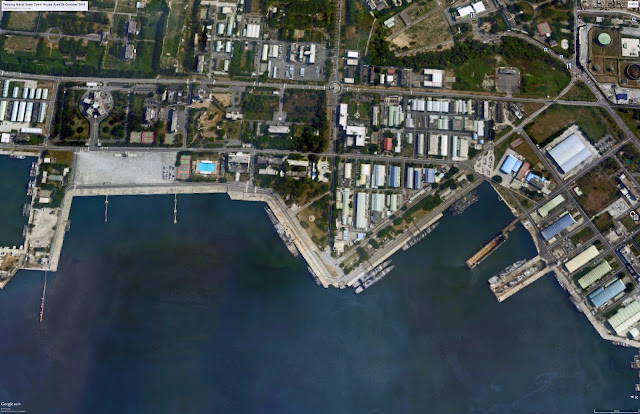 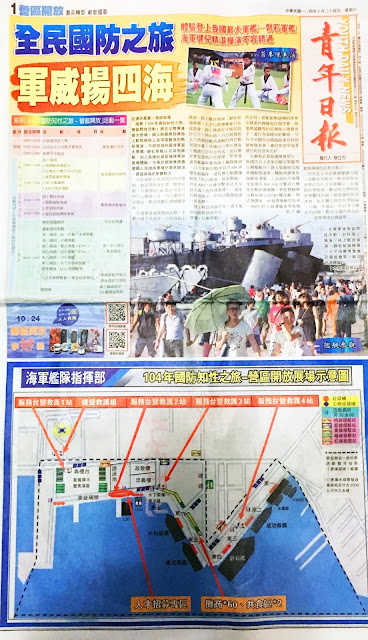 This newspaper was handed-out as we off-loaded the bus.

The Google Earth photo and the newspaper drawing just above identify the display and performance areas. 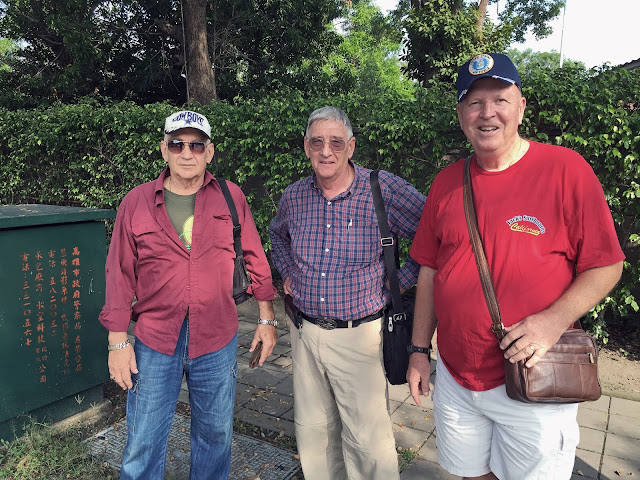 My friends, all of us retired US Military personnel, standing just outside the Metro Station.
We walked from here to the security point and bus loading area along the street.
Jim had parked his car a few minutes earlier at one of the base parking areas. 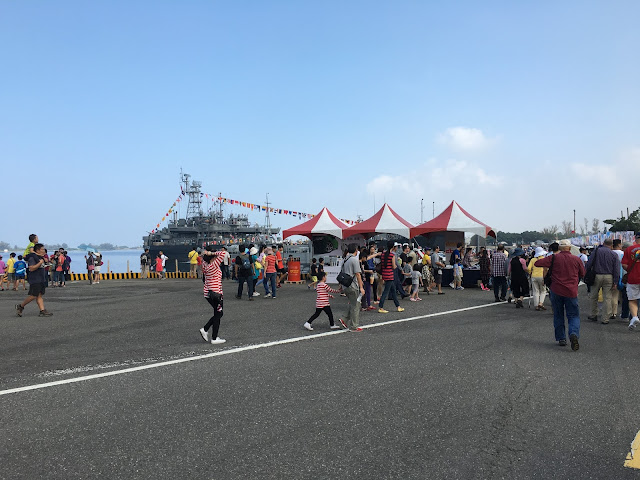 We off-load from the bus and walked 30 yards toward the display area.
This was probably about 9:00 AM. T
The large crowds had not yet arrived. Everyone loved the Marines.

How bout this Camo pattern the Marines are wearing. 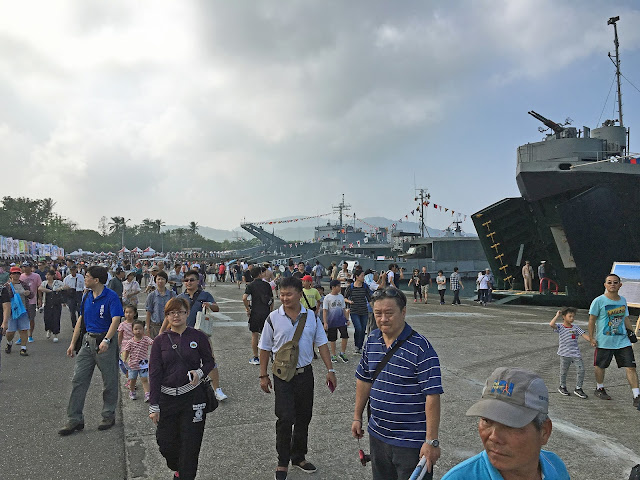 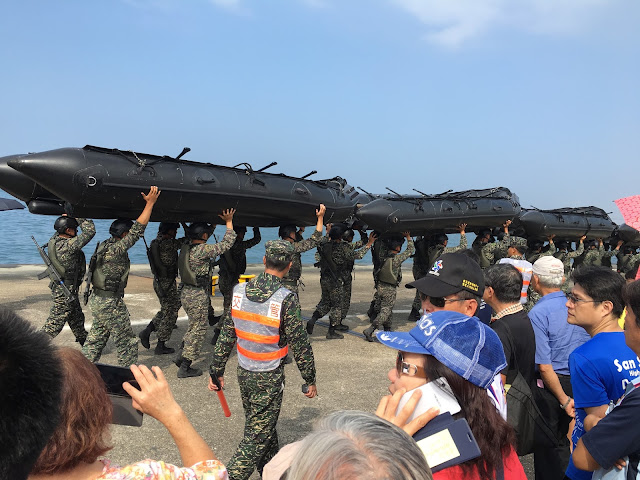 Taiwan Marines carrying Combat Rubber Raiding Craft.  Every Marine also carries a weapon.
US Navy Seals also use this type of craft.
The Marine team consisted of about a dozen craft and crews.  They did some water exercises where all crew members were in the water, while 2 men upped the craft after which time the craft was overturned completely by two different men, all the while, these Marines were also carrying their weapons and gear will in the ocean.   Impressive! 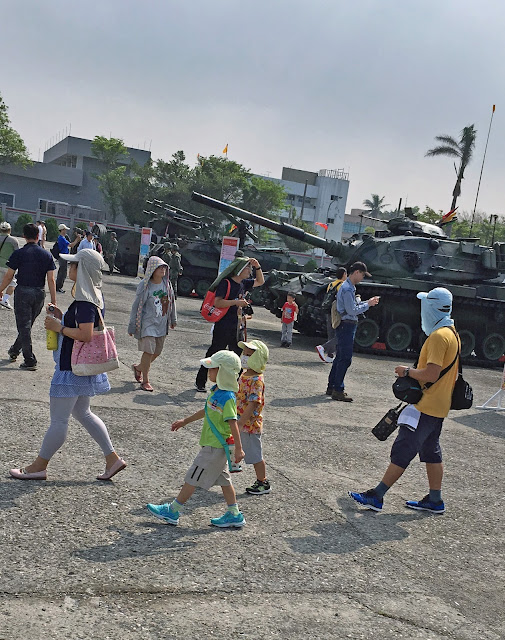 The sun is beating down and the breeze has disappeared, it's HOT!
This family knows how to keep cool, dampen down the hats and keep you neck and face covered as the little boy in the orange shirt is showing us. 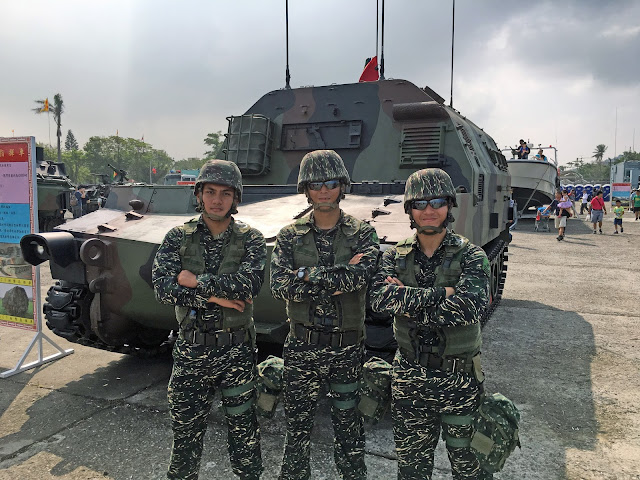 These three Marines were happy to practice their English with us as they stood in front of this military vehicle.
What's you opinion on this Camo? 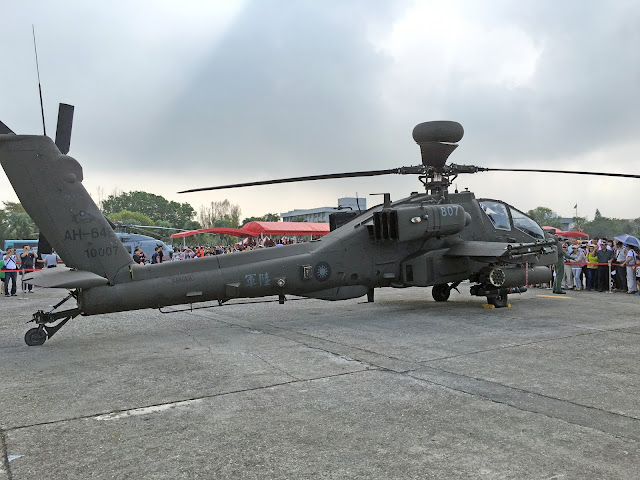 An Apache helicopter on display.
Taiwan was the first country outside of the US to receive the helicopter.
There are a number in Taiwan and more on the way.
We stayed around this area for a long time.
All sorts of military vehicles, helicopters and equipment was on display.
It was hot and our water bottles were long empty, time to head down to the refreshment tent area to find some cold drinks. 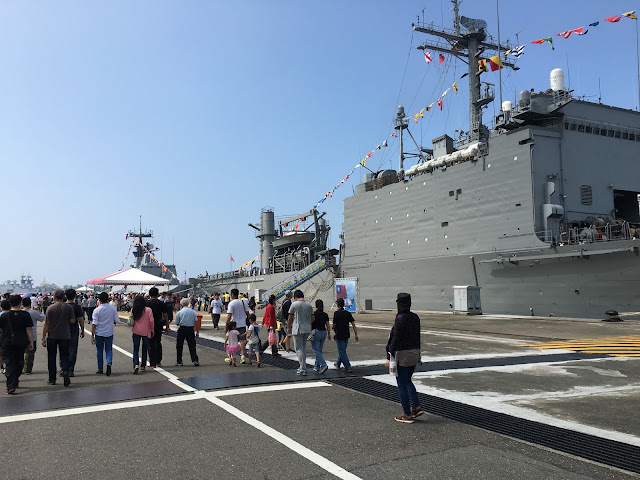 Walking toward the food tent area. 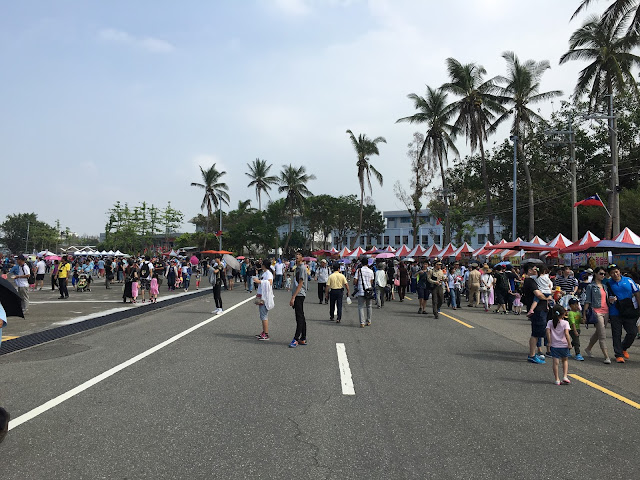 We purchased cold bottled drinks and wolfed them down in a couple of gulps, I was dry!
Got back in line and got another cold Coca Cola orange drink with pulp.
That orange drink was really refreshing.
A couple of hours later, we were starving for a cold drink again.

We walked back to the tent that sold us drinks a couple of hours or so earlier, but, the tent was gone.  Guess they sold out.

I understand that last year's "Open House" had many less attendees.  I suppose the drink tent we visited earlier in the day wasn't prepared for the tremendous attendance at this year's event and ran out of stock. We moseyed down along the pier past a number of large Taiwan Navy Vessels.
Everyone vesicle was open for visitors.  If you wanted to climb up inside the vessel, the lines were long. 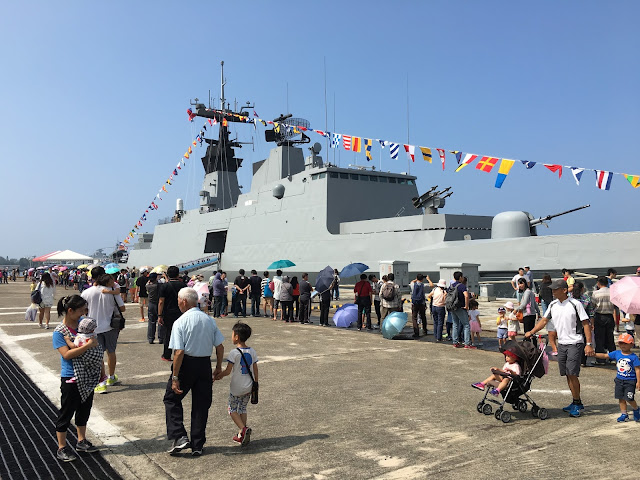 This looks like one of the newer "stealth" type vessels. 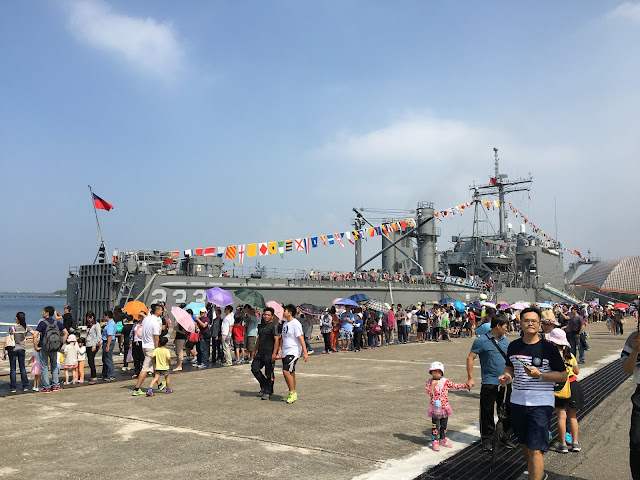 Lots of folks lined up to visit this ship, long lines at each of the ships. 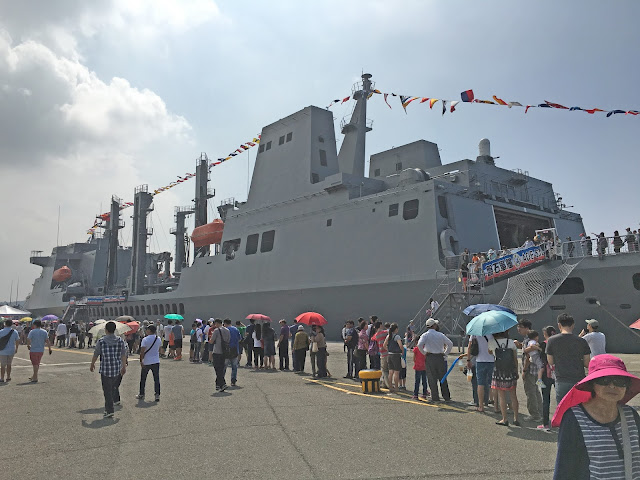 This ship looked to be the largest on display.  I believe it's a "supply" vessel. 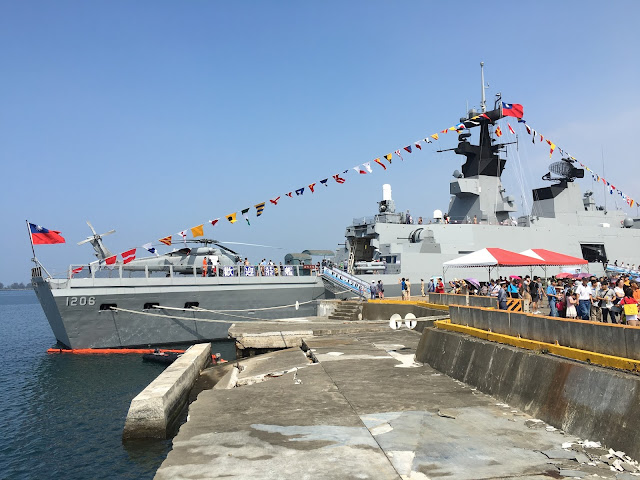 The breeze has picked-up down here along the docks. 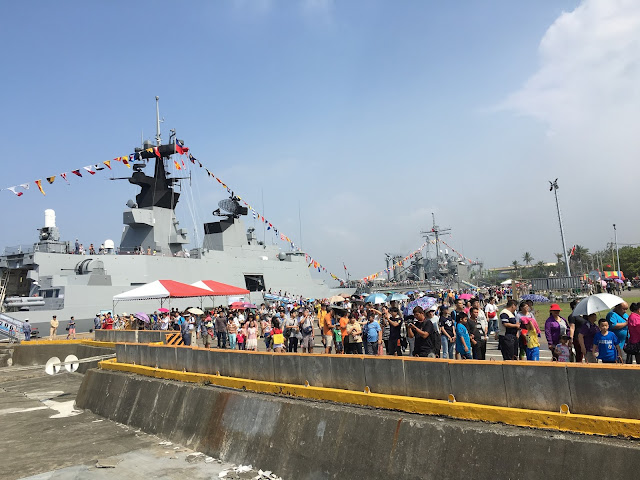 The crowds are large, and the buses keep unloading visitors. 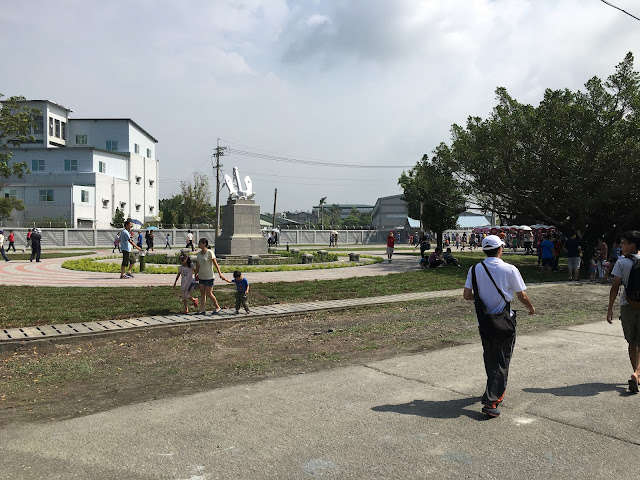 We spotted some porta potties over behind the trees.

Didn't really have to go, all the liquid in our bodies was pouring out as sweat, it was hot, in the high 80s with 88%  humidity...
We sat down in the shade of the trees for a bit until we all got back together.

It was after 3:00 PM, and everyone was ready to head out.

We caught one of the buses and found ourselves at a different parking area that where Jim had parked his car.

We decided to walk off base and catch a taxicab to where our car was parked. 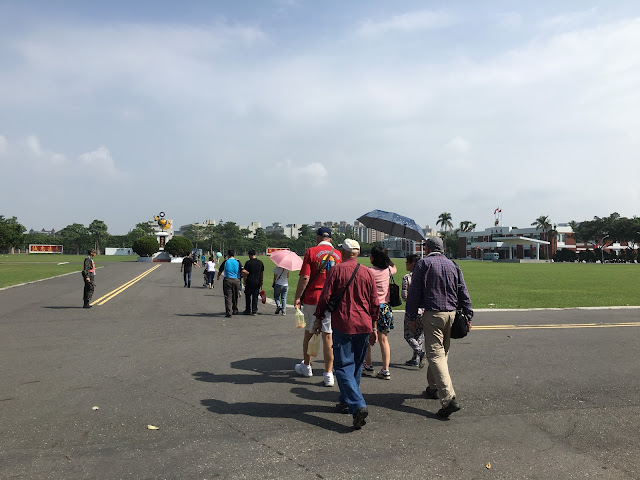 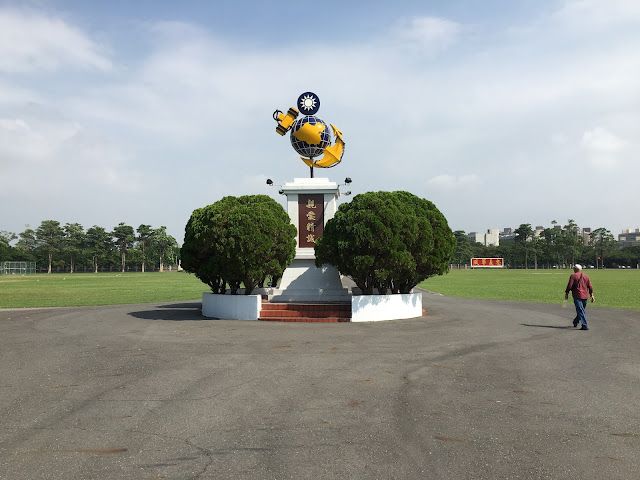 Hey Benny, "We're about half-way to the gate." Finally, outside the gate, we started looking for a taxi.

Thanks to one of the Marine guards on duty, there were quite a few men on duty around this gate today, a Marine used his cell phone to call us a taxi.  Thank you sir! 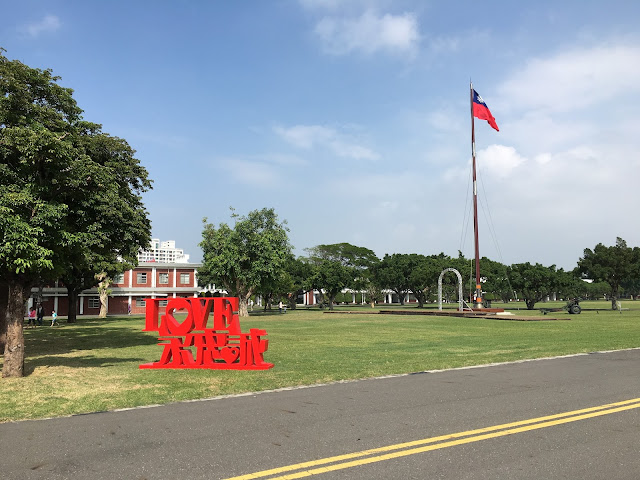 Be sure to enlarge it by clicking or double clicking a number of times.

As former US Military men, we appreciate and understand the feelings of the Taiwan Military personnel.

It was a great honor to visit the base today.

We sincerely appreciate the work and efforts of those who helped us secure the invitation to visit the Open House.

Thank you to the all of the citizens of Taiwan.

Posted by Taipei Air Station at 1:55 AM 3 comments: