Here's an update to our Navy Club in Kaohsiung story and photographs.

I spoke with a Manager of the Sea Dragon Club in it's earlier days.

I sent photos of the Menu Cover and prices and he said that the "Prices" of the Menu items, were prior to his arrival.

So, these were probably from sometime in the later 1950s.

The 3 photos below, are courtesy of Scott Ellinger.

And, one more note, the 2 Menu pages look different, BUT, back in those days, the Office had to TYPE each Menu, No Xerox in those early days. 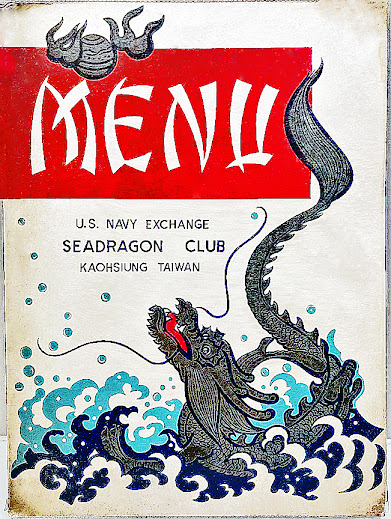 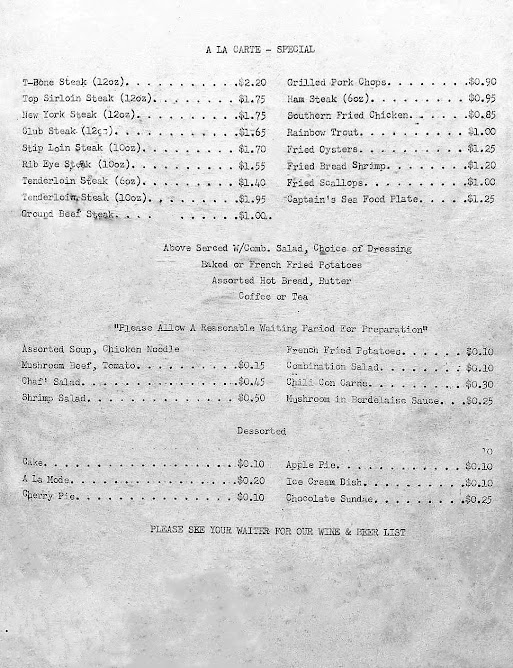 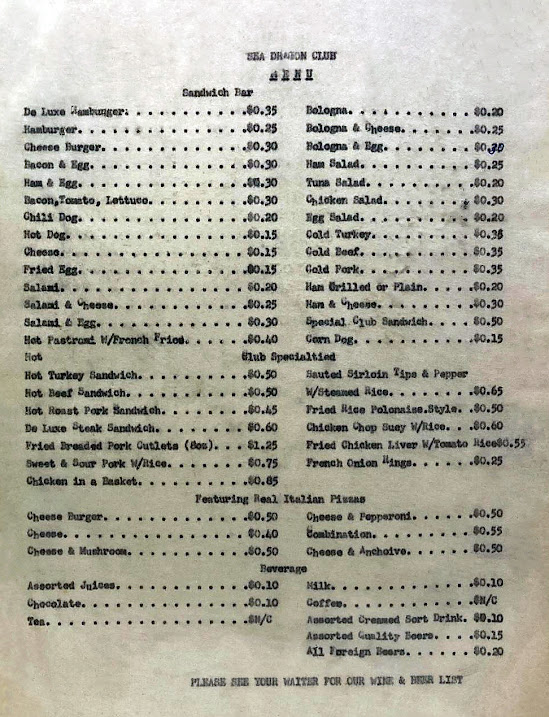 Today, another look back at our Navy Club in Kaohsiung.

I'm not aware of exactly when the Kaohsiung Navy Club first opened it's doors to visiting Naval vessels.

During the US MAAG years in the Southern area of Taiwan, there were 2 additional US Military Clubs in the Kaohsiung area, which were initially operated by US MAAG Taiwan.

Chances area, many Sailors on visiting ships also found their way to these MAAG Clubs in the Kaohsiung area, for the most part, Officer's and Senior Enlisted.

The Navy Club was probably a "Little Loud" as the evenings progressed.

Those MAAG Clubs were later transferred to the Navy Exchange as MAAG personnel completed their assignments and were reassigned as their positions were eliminated.

In later years the MAAG Personnel numbers were very low.

The "Mission" of MAAG was to train Taiwan Military Personnel to use and maintain  Military Equipment, provided to the Taiwan Government by the United States, as  thousands of Chiang Kai shek's military personnel flooded into Taiwan as World War II came to an end in Asia.

When we talk about MAAG, you cannot imagine how many places our MAAG personnel were working with Taiwan Military Personnel throughout Taiwan proper, and the outlying islands.  They were everywhere. If you look on the right hand margin of this Blog, I have linked to a number of films about Taiwan, at least one on MAAG I believe.

Taiwan, for those of you were fortunate enough to be assigned there, was probably the Best Assignment in Asia.

A friend, Scott Ellinger, ran across these old photos that were taken in Kaohsiung.

These center around the Navy Club, a few blocks up the street from Fleet Landing. Many Sailors and Marines walked that street back-in-the-day.  You will probably recall the street when seeing these photos.

You folks who visited Kaohsiung or were assigned in the area will probably recognize the Club Building which changed a little thru the years. What went on at the Club depended on who the Manager was.

At one time, there was an Officer's Lounge, and a Top 3 Lounge and an E6 Lounge. One year, the club sponsored a "boat" in the Kaohsiung Dragon Boat Races.  I will include that Dragon Boat story in links below. 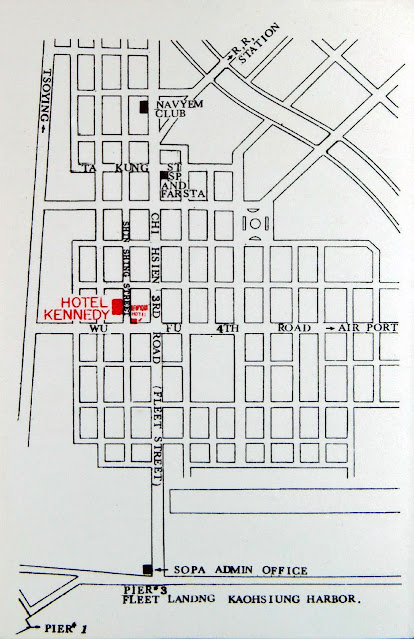 You'd walk straight up the street from Fleet Landing.

Could not get much easier.

The red color, Hotel Kennedy, which must have had this business card size map drawn, hoping you might decide to spend the night in their hotel. 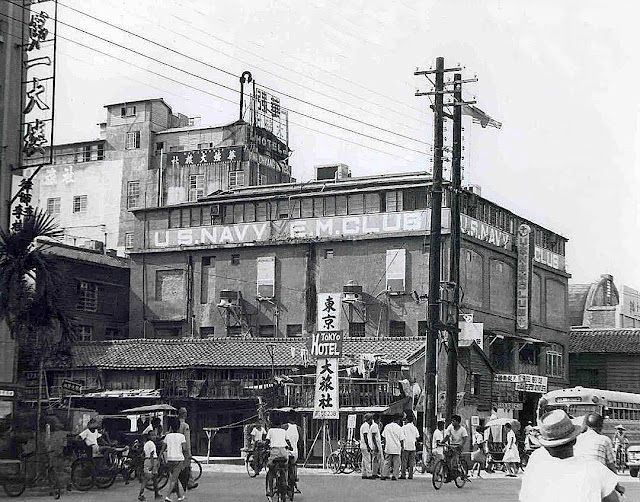 What can we see in this photo?

The sign hanging down in front of the club appears to display in both English and Chinese, but I can't make it out.  Anyone figure out what lights-up at night?

There's a Navy Bus sitting at the front door of the EM Club.

There's a Marine in Uniform, walking in front of 2 boys of left side of photo.

Also, looks like another Marine walking into the Front Door of the club.

Notice the Hotel in the rear of the EM Club in this photo.  It's not named the Kennedy Hotel, it had a Chinese name when this photo was taken. 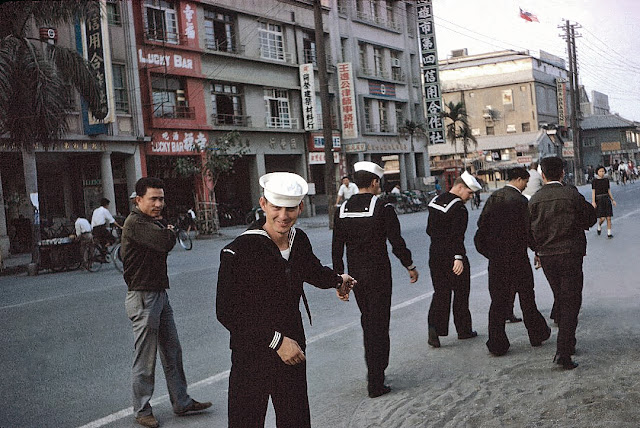 We're not cheap, we have COLOR 😀

This photo taken years after the black and white photo above.

The club has a new name:  "Sea Dragon Club" hanging in front door.

Building looks to have been painted, re-modeled and more air conditioning. 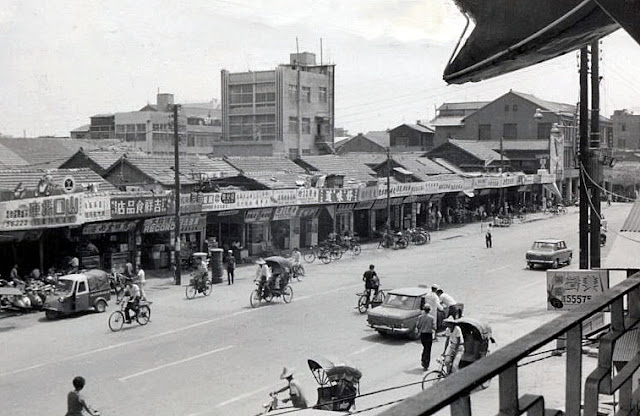 Take a look at the Color photo again.

Look at the Sea Dragon sign, it looks to have Neon piping surrounding it.

Look at this Black and White photo just above.

This window can be seen in the previous color photo. 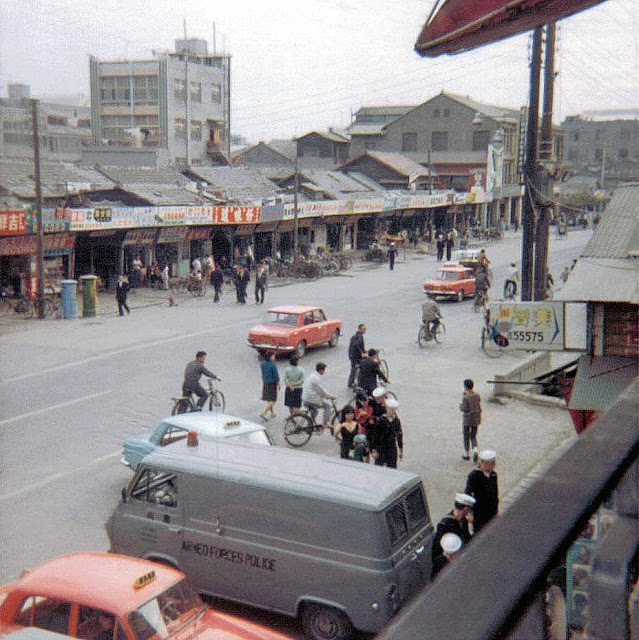 Same time-frame as black and white photo above. 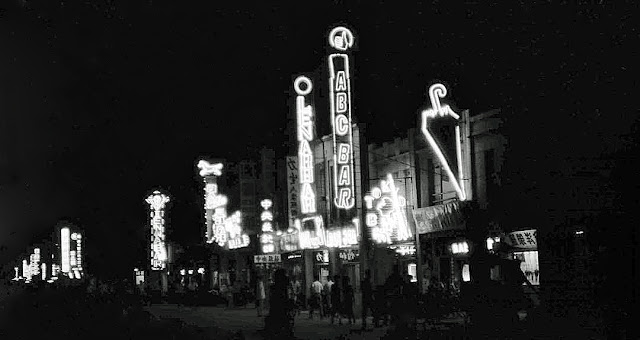 Later in the evening, after a number of cocktails, it's time to take a walk down the street to see what else is going on.

Here is one of the Bar Streets, where fun and games go-on until the wee hours.

New Photo of the Kaohsiung US Navy Club

This Menu courtesy of Scott Ellinger

Links below for other Kaohsiung stories in my Blog.

Bits and pieces about Kaohsiung appear in many stories in my Blog.

The 2 stories, below, were individual stories reflecting on the Kaohsiung area.

To Open stories below, mouse on the line and double click....