I recently received an Email from a woman whose father was stationed at Sung Shan AB during 1972-1974.

She is very interested finding anyone who may have known her father, Henry Roland Carman, who was called,  "Jersey."

Henry worked at Sung Shan AB in MAAG Flight Operations Section.  She is not absolutely sure what his job was.
Henry was killed in an automobile accident in Taipei, in 1974.

This is really an extraordinary piece of art!
Take a real close look, there's lots of interesting stuff to be found in the drawing.

Henry is pouring liquid on the left inside engine of the USTDC C-54 aircraft.

You would assume, these were the men assigned to Flight Ops during 72-73. 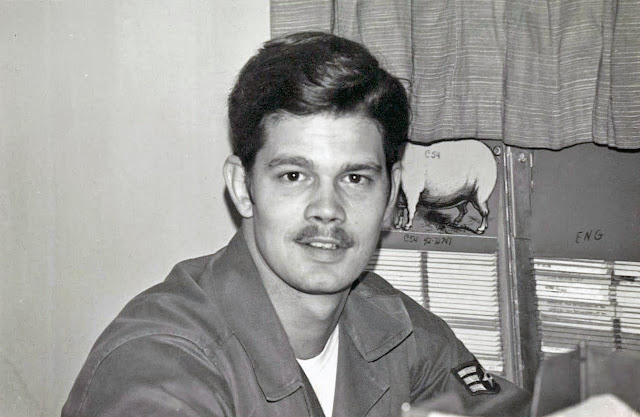 Here's a photo of Henry circa 1970s, during his assignment in Taiwan.
Perhaps someone remembers Henry, or for that matter, another Airman in the drawing/photos above, please write to us.
TaipeiAirStation@yahoo.com

A reader of this blog who knew Henry Emailed us after reading the story above.

We forwarded the Email to Henry's daughter.


Remembrance Day, celebrated on the 11th day of November, is also known as Armistice Day or Poppy Day in Commonwealth countries, and Veterans Day in the United States.

Yesterday, Sunday, 10 November 2013, I attended a beautiful Remembrance Day Service, held  on the grounds of the Kinkaseki Taiwan Prisoner of War Memorial in Jinguashi, Taiwan. Jinquashi is a short distance east of Keelung, along the northern Pacific coast.

The Memorial was constructed on the site of the Japanese Kinkaseki Prisoner Of War (POW) Camp. The only evidence of the old POW camp is a gate post and a short portion of an old wall, which sits along the edge of the new memorial area. 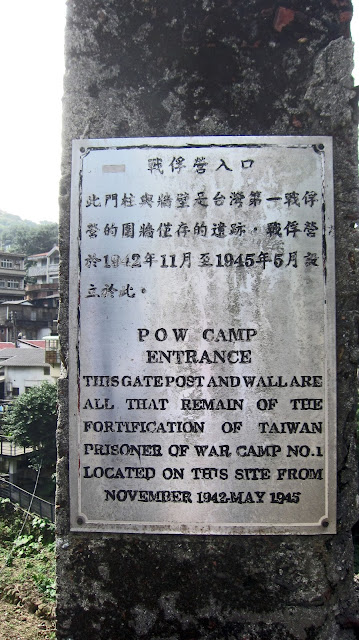 A beautiful Sunday morning.  It was uncommonly warm and sunny, in the mid 80s, when our bus arrived at the old camp area.  The location of the camp can be seen by lifting and dropping these coordinates into the Google Earth search box. 25° 06' 38.6"N 121° 51' 30.4"E  I believe the "street view" of the Memorial area was recorded before the Memorial was completed.

Some may ask, POW Camps in Taiwan?  Yes, there were 14 different POW Camps located on the island. 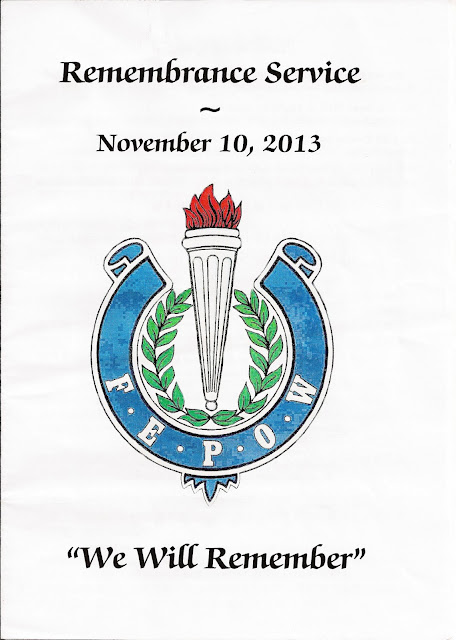 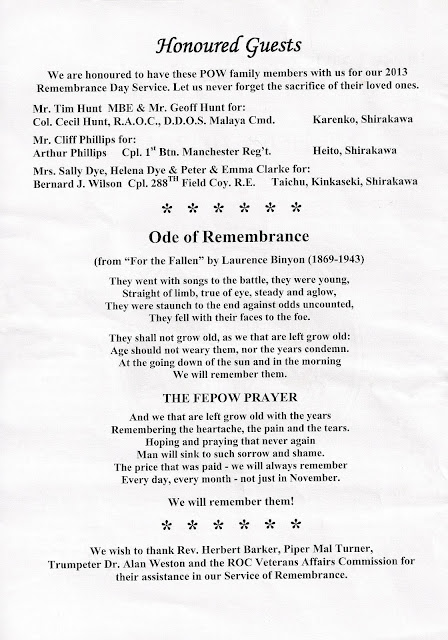 This year, there were a number of Prisoner of War family members in attendance. They came from afar to visit the camps where their relatives had been imprisoned during the Second World War.

Please take some time to read about the men who were in the Taiwan POW Camps.

It kind of puts a knot in your stomach when you think of what these POWs went through, day after day, night after night, never a day or moment away from the surroundings and physical and mental pain of the camps. Words cannot truly describe what these men encountered during their imprisonment in Taiwan, and many of these men, had arrived in Taiwan from other POW camps in Asia.  As I write these words, my heart aches.. We must never forget these, and other men, who lost their lives, for you and me.  And for those who endured their time in these camps, and survived, thank you.  God Bless each of you.... 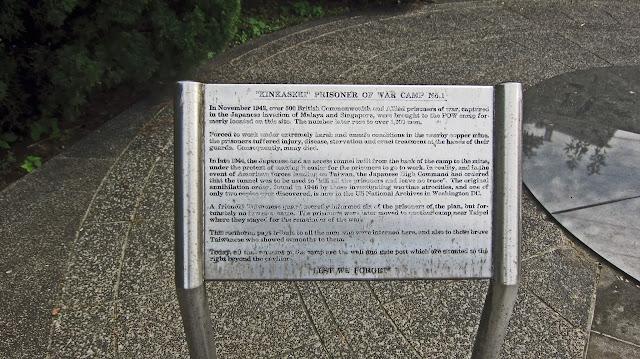 I know that it's quite difficult to read the words.  I've copied the words.

"KINKASEKI' PRISONER OF WAR CAMP No. 1

In November 1942, over 500 British Commonwealth and Allied prisoners of war, captured in the Japanese invasion of Malaya and Singapore, were brought to the POW camp formerly located on this site.  The number later rose to over 1,000 men.

Forced to work under extremely harsh and unsafe conditions in the nearby copper mine, the prisoners suffered injury, disease, starvation and cruel treatment at the hands of their guards.  Consequently, many died.

In late 1944, the Japanese had an access tunnel build from the back of the camp to the mine, under the pretext of making it easier for the prisoners to go to work.  In reality, and in the event of American forces landing on Taiwan, the Japanese High Command had ordered that the tunnel was to be used to "kill all of the prisoners and leave no trace".  The original annihilation order, found in 1946 by those investigating wartime atrocities, and one of only two copies ever discovered, is now in the US National Archives in Washington, DC.

A friendly Taiwanese guard secretly informed six of the prisoners of the plan, but fortunately no invasion came.  The prisoners were later moved to another camp near Taipei where they stayed for the remainder of the war.

This memorial pays tribute to all the men who were interned here, and also to those brave Taiwanese who showed sympathy to them.

Today, all that remains of the camp are the wall and gate post which are situated to the right beyond the pavilion.

I filmed Michael's message, "Remembering."
Unfortunately, the video sound was not recorded and a "silent" film would not be appropriate for this story.

Before and after the Remembrance Ceremony, many of us walked around the War Memorial grounds. 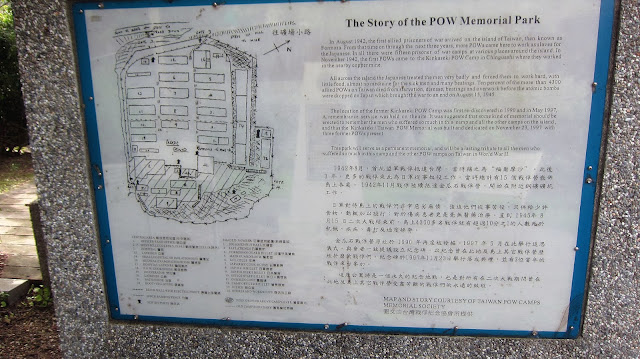 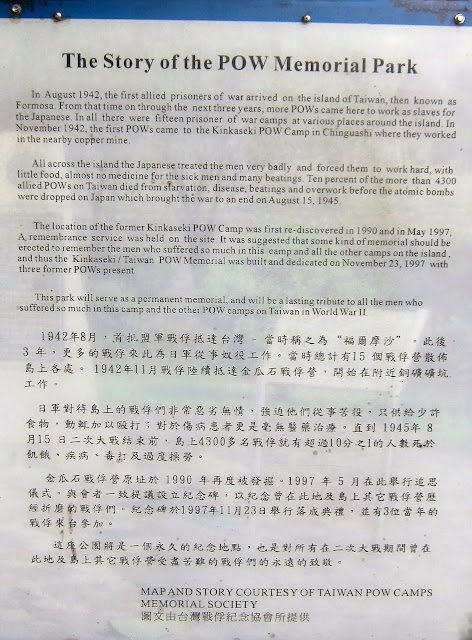 If you're in the Taipei area, take a trip out to the  Kinkaseki Taiwan Prisoner of War Memorial grounds.
The memorial is beautiful and the views of the mountains and surrounding areas is superb.

If you can't get there, be sure to sign up for the bus transportation to next year's ceremony.

You can check for information on the Taiwan POW Camps Memorial Society web page.


One last truth from the Wall at Kinkaseki ! 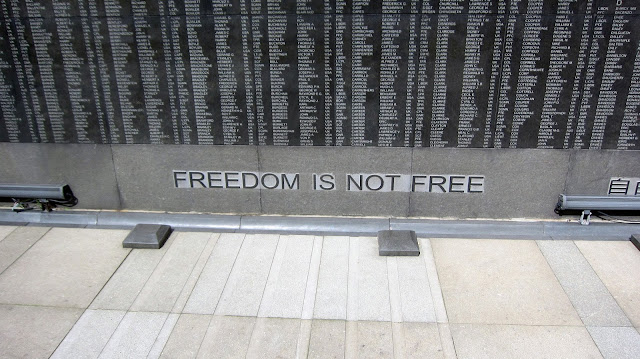 I am not familiar with the circumstances of how our Taiwan POWs were released from captivity and how they made their way home.

We do know how and have film of our Vietnam War POWs return, below.

Before you leave, please  watch the American POWs return to Clark AB, Philippines.

If you liked this film, read the story on the Homecoming of our POWs at Clark Air Base,  HERE, where you can watch other films on the POW release, 40 years ago.
Posted by Taipei Air Station at 4:10 PM 1 comment:

Include Taiwan in RIMPAC 2014 - UPDATED

In this morning's Taipei Times newspaper, a front page story reports that a formal letter has been sent from a number of congressmen to US Secretary of Defense Chuck Hagel asking that Taiwan be invited the the 2014 RIMPAC Exercise.

And, Here's a link to RIMPAC.

LASTLY, a copy of the correspondence sent to Secretary Hagel.

This is hopefully a start to a stronger relationship with the citizens and military of Taiwan.