Airman Frank Smith arrived at Sung Shan AFB in Taipei, 8 May 1961 aboard MATS Flight 741 from Clark.

Chances are, Frank flew from Clark aboard a Southern Air Transport (SAT) C-54 (DC-6)  or another of the many C-54s that flew the "Milk Run" from points in SE Asia every day of the week,  which looked like the photo below, in the early 1960s. 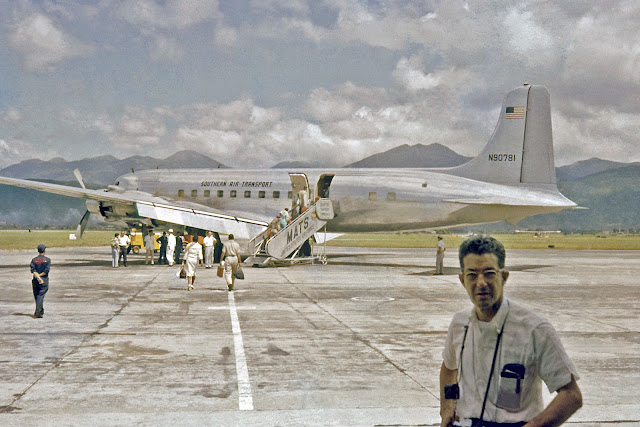 This photo and all others in this story are courtesy of Frank Smith, unless noted differently.
This is a really nice color photo from 1961.
The man standing on the right "is not Frank."

For many of us, flying aboard a Southern Air Transport scheduled flight from Clark, was the first time we encountered stewardesses walking the isle passing out hot towels and hard candy.

Those hot towels encouraged us to relax, settle down, wipe the dust from our face and  hands, and, try to figure out just what the flavor the hard candy is supposed to be.
By the time we figure everything out, our aircraft has taxied to the runway, and soon we're  climbing to flight altitude toward Taipei, a 638 mile flight.

For many of us, in the early 1960s, the long trip across the Pacific was the first time we had flown. Many folks drove their cars to the west coast, some took the train.


Frank "Puddle Jumped" across the Pacific from Travis AFB. 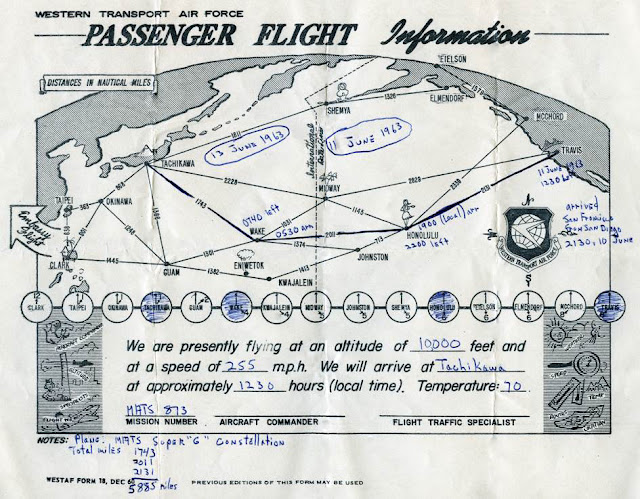 Someone took time, which was abundant, flying across the Pacific, to note their flight information.

This is an interesting military form.  Mileage between locations included.
What a piece of history, and the wonderful memories this old form congers up!

Frank said, "at least one of the legs of his flight, was aboard a turbo prop aircraft.

The day our flight arrived in Taipei it was really Hot, around 100 degrees. 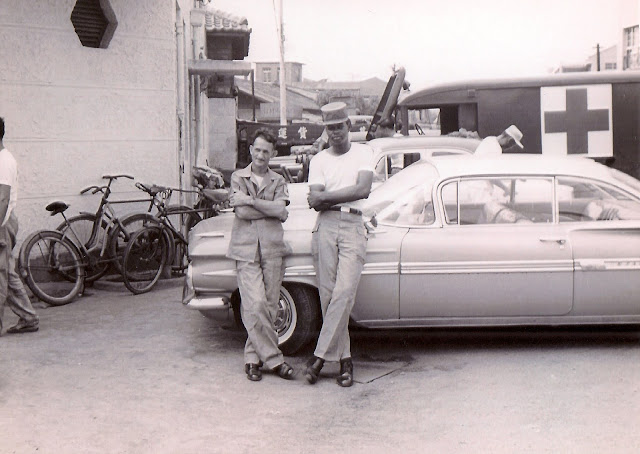 "We were driving from the airport toward Taipei Air Station and came to a large bingo ditch, people were standing around and blocking traffic.

We got out of our car and looked down into the water.  A baby's, obviously deceased, was caught-up in a snag of debris.  I was shocked at the attitude of the crowd."

Frank signed-in at Taipei Air Station and later that Monday, checked-in at the Motor Pool, where Captain Spencer, one of the Motor Pool Officer's, informed him that his duty assignment would be at Taiwan Motors. 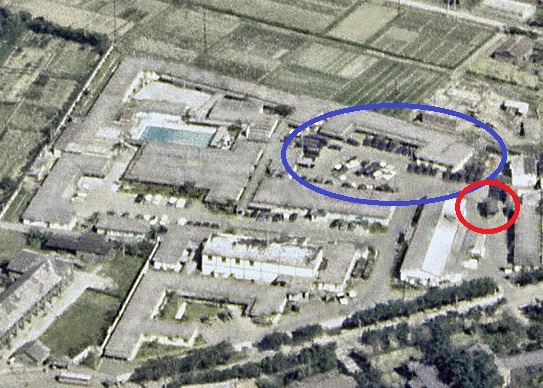 Taipei Air Station (TAS) circa 1961-62
Double click on all the photos for larger view.


Frank was assigned to a duty position at Taiwan Motor Company, Service Department. Why would he be working there?

Because there were no maintenance facilities on Taipei Air Station to repair vehicles, at the time.

The Blue Circle in the photo above, represents where the Taipei Air Station vehicles were parked.  No room on the station to construct maintenance facilities.

The Red Circle in the photo above was the Dispatch Office, which controlled the movement of base vehicles, and determined when vehicles would be sent to Taiwan Motor Company for service and repairs. 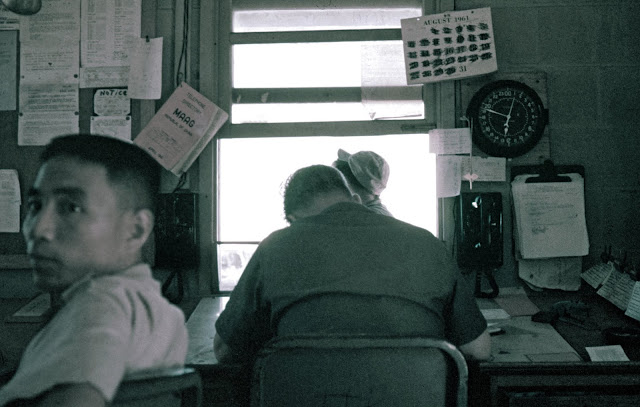 Inside the Dispatch Office (Red Circle in Photo above) The central office for all Taipei Air Station vehicles and their movements.

Notice calendar on the wall, August 31, 1961.  There is also a MAAG phone directory hanging on the wall.

Taiwan Motor Co. was a civilian entity, located on the same street, that ran in front of Taipei Main Station, about 2 miles or so, east of the Main Station, on Chung Cheng Road.

The name of that street was changed after Frank's time in Taipei, and today the street is named, Zhongxiao West Road. 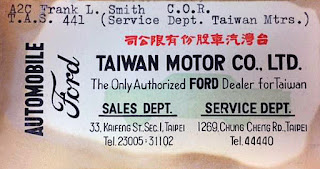 What is C.O.R. in Frank's Business Card above mean?

Who remembers the Taiwan Motor Company Service Department Garage?  Perhaps you took your car there for service.

I remember the garage, and the road in front of it.  I had shipped my new 1965 Mustang to Taipei.  I brought the first Mustang into Taiwan, never saw another one in 1965.

Sometime in 1966,  the rocker panel paint under the car doors lifted and begin to fall off.   Because the vehicle was under "Warranty", I took the Mustang to Taiwan Motors and they repainted the areas, good job too.

Through the help of Frank Smith who took these photographs and my friend Chris Wang, Chris was able to identify the location of both, Taiwan Motors garage and their salesroom. The sales department was located very close to Taipei Main Station.

Lets look at the maps. 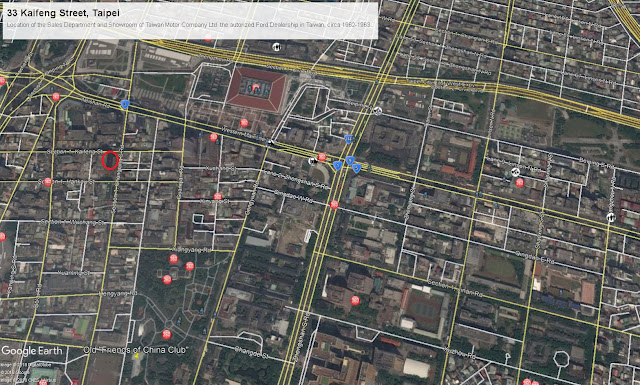 Here's the location (Red Circle) of the Sales Showroom of Taiwan Motors in the early 1960's.  13 Kaifeng Street, that street name has not changed.

The showroom is gone, and that parcel of land houses some type of restaurant today.

Notice the yellow street line just to the right of the circle above, that street would have run directly into or just to the left of the old Taipei Main Station in the 1960's.  That old station was torn-down. Today, a new station sits a short distance east of where the old station sat, seen at top of this photo, maroon colored rectangle with red in center, northeast of red circle.

There are a number of Ford Dealerships in the Taipei area today. 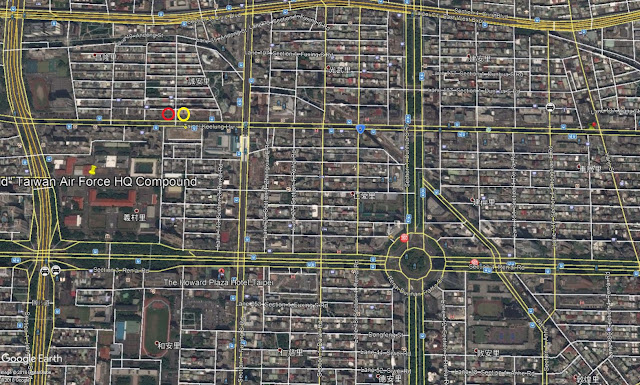 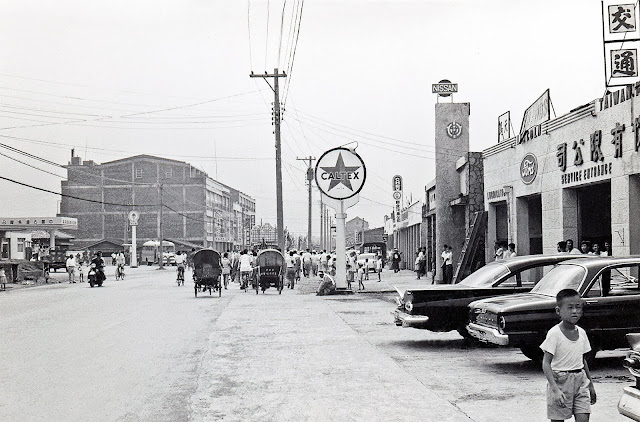 The Ford Garage, taken 1961, Frank's photo.  Frank is standing looking westward, toward Taipei Main Station, a couple of miles away. 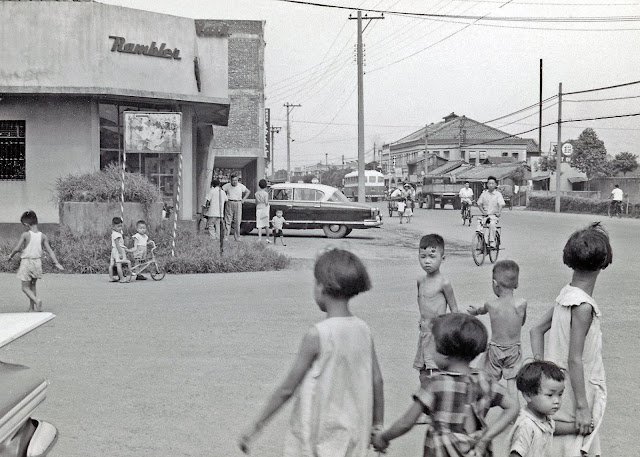 Photo taken from Taiwan Motors Red Circle looking East toward Yellow Circle, map above, just across the side street.

The building was the Nash/Rambler garage. Notice the "Pill Box" in back of the 2 boys directly across the street.

There was a side street between the two companies.
I don't have a photo showing both companies in one photo. 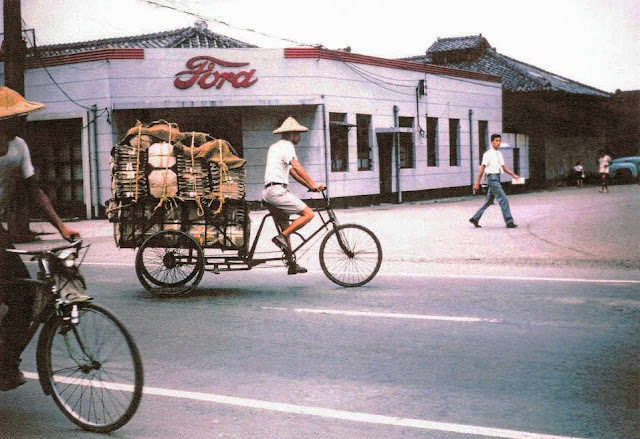 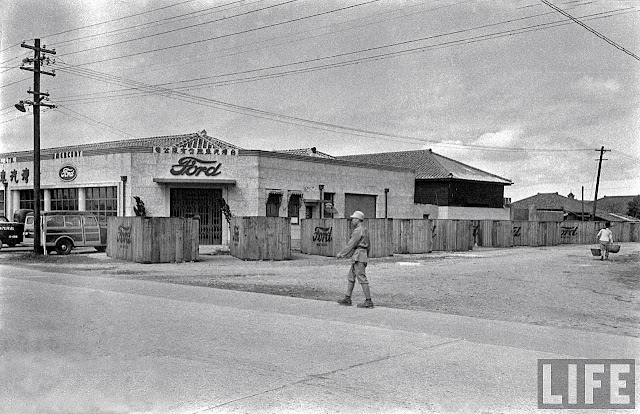 1949 Life Magazine Photo you can see side street easily in this photo.

Notice the Ford  "Woodie" wagon parked by garage door above. 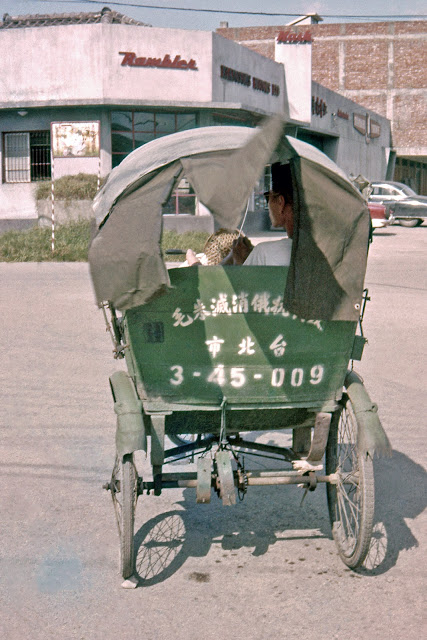 Looks like the Pedicab driver is resting will waiting a fare. Got his shades on. 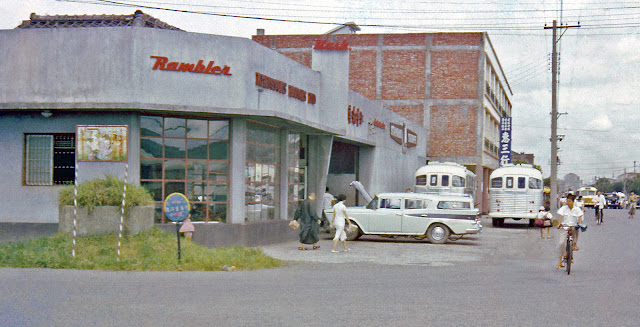 A nice picture of the Nash Rambler garage. looking eastward. 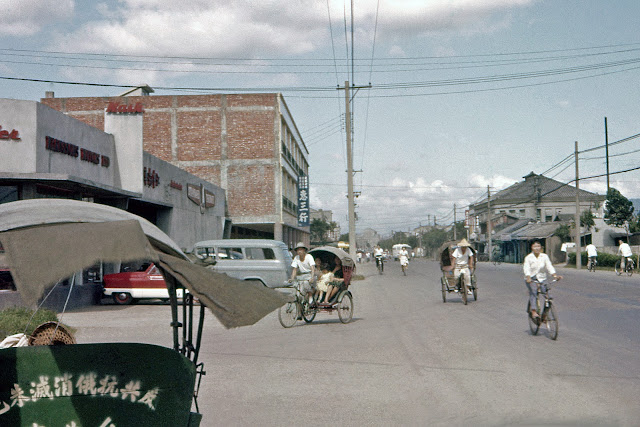 Still waiting for a fare, maybe the driver is catching a nap?
Photo looking eastward. 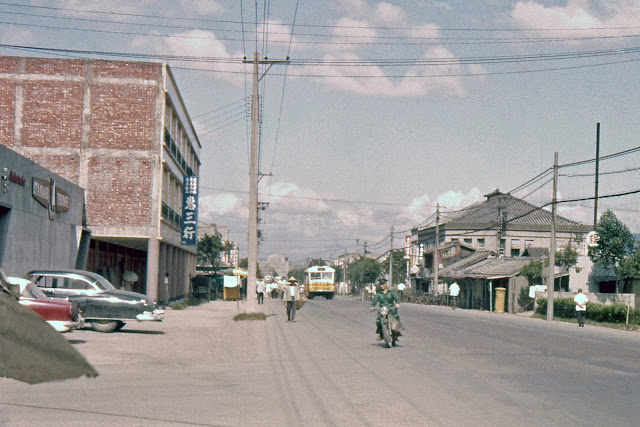 Frank had to be standing close to the Pedicab in photo above, when he took this shot, notice the pedicab side tarp blowing in the wind on left.

Look, there's a Taiwan Postal  Mailman, on his motorcycle, turning down the side street between Taiwan Motors and the Nash Rambler garage.
Photo looking eastward. 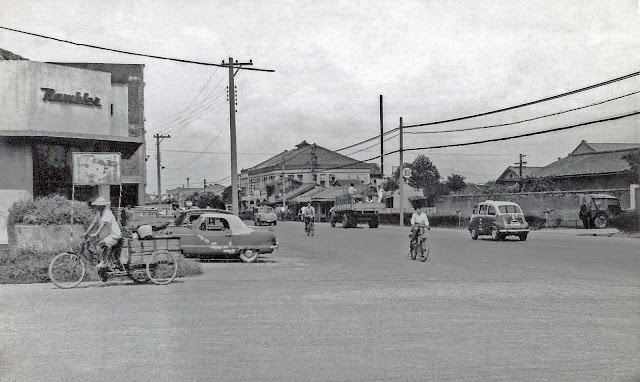 One more shot looking westward.
Does anyone remember small "Taxi's" like the one heading up the street, just to the left of the military jeep, parked on right side of this photo. 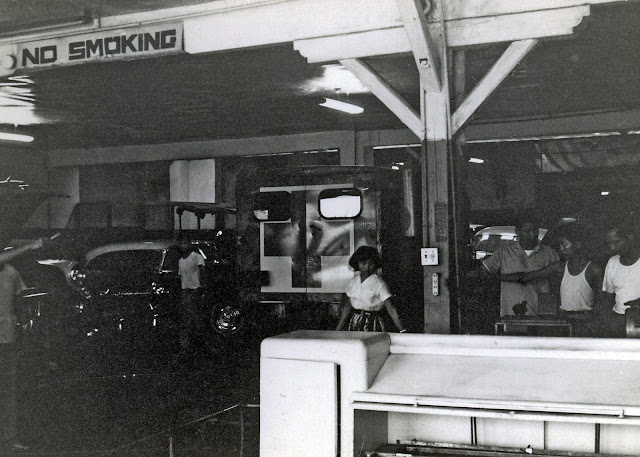 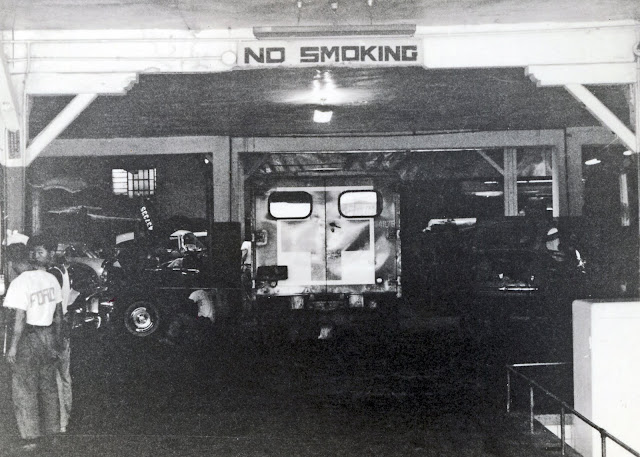 Last look inside the garage.

I believe this story is one of the few that goes back to the beginning of our time in Taiwan, shown by photographs.

I suspect in 1949, we already had military in Taiwan.

Much more coming on Frank's assignment in Taiwan.