Les Duffin found this photograph of the "Charger Inn" in the 1973 Taiwan Report, a booklet normally presented to newly arrived personnel during in-processing. Be sure to click on the photograph view the large copy of this photo.

I never had an opportunity to eat there. I don't recall why, could it be that only personnel residing in the barracks were allowed to eat in the facility?

Can someone help with information about the facility.

How did the name "Charger Inn" become associated with the dining hall? Maybe the Mess Sergeant was from San Diego, OK, maybe he liked Dodge automobiles? Alright, someone help with the correct answer.....

The Hennessy Trophy was awarded to the "Charger Inn" in 1972.

Shu Linkou Air Station had an outstanding dining facility. They captured the Hennessy Trophy in 1968 and 1969, two years in a row. After Taipei Air Station won the trophy in 1972, Shu Linkou came right back and took home the trophy again in 1973 and 1974, another two year run.

Taiwan - our home away from home, serving delicious food just like Mom cooked!

Update - Saturday 26 July 2008: Les Duffin remarked: "The dining hall at SLK was always a highlight. One year when they didn’t win the Hennessy Trophy, they were so embarrassed they remodeled the whole place (new fountain & fish pond among other things) and added a row of Hibachi cookers out back so, when you went through the line you were asked if you wanted your meat cooked or smoked." That's a "bet you didn't know" story, few were aware of, but so interesting. Thanks Les.

A relic of the past, but it brings back so many memories. Most of us smoked during our days in Taiwan and match books from the club were everywhere. Got at match?
Posted by Taipei Air Station at 7:54 PM No comments:

Homes in the Surrounding Area

Update 2: Jim Caumo furnished this additional photograph of the "China Arts and Sports Center" circa 1964. This is the circular building seen below.

"I just saw the two photos on your site taken from the New Taipei Hotel. I have no memory of that hotel, but two buildings in the photos are familiar. The round structure in the distant left of the first photo and right in the second was a basketball stadium, but I don’t recall its name. The other building is the Mandarin Hotel which was under construction at that time. It’s the large building in the left of the second photo. I believe both structures were along Tun Hua North Road; I think the stadium was near the intersection of Tun Hua and Nanking East Road and the hotel was near the intersection with Minchuan East Road, very close to the airport. So I would guess these photos were of the northeast section of the city, probably looking roughly east. The airport should be somewhere in the distance behind the hotel, but I can’t make it out." These 2 photos were taken from "The New Taipei Hotel." The hotel does not show-up in a Google search. I have no idea where it was located, however, you can see a couple of large buildings which someone may identify. These photographs were taken in 1963.

Some of these homes look really nice. I know a number of folks assigned to Taipei Air Station resided in the general area.

Your Home Away From Home in Gongguan - Outside the Gate 'UPDATED'

Jim Caumo, Taipei Air Station, November 1963 - February 1965, furnished these photographs of his off-base home and apartment near the Air Station. On base quarters were very limited and most folks had to reside in the civilian community. Quite an experience for a young man on his first Air Force assignment. (Be sure to click on the photographs for a larger view) On the balcony looking toward Taipei Air Station. The Gate area was just on the other side of that hill with the trees. A freight train is parked on the tracks. Looking out the balcony to the left of the previous photograph, same hill in background. Notice the rail tracks just outside our apartment.

Jim's first home off-base, a small bungalow. This landlord also owned the apartment next door, which he moved into. The photographs above and below were taken from that apartment. Jim also resided in the Chinese Hostel outside of the HSA Compound, as many of us also called home one time or another.


Another shot from the balcony. Notice the train tracks and possibly a railroad station. A shot off the balcony again, showing a steam engine hauling down the tracks . Here's a Google Earth Map of the area these photographs were taken in. It was impossible for Jim to identify the exact area he lived. The streets have been changed, Roosevelt Road has been re-routed, the railroad tracks have been removed, everything is different in this area, including our beloved Taipei Air Station. Anyone else live in this area?


I ran these photographs through Photoshop and tried to clean and sharpen the images.

They seem a little clearer now.


I know a few friends visit this site regularly for updates.  Hope this is an improvement. 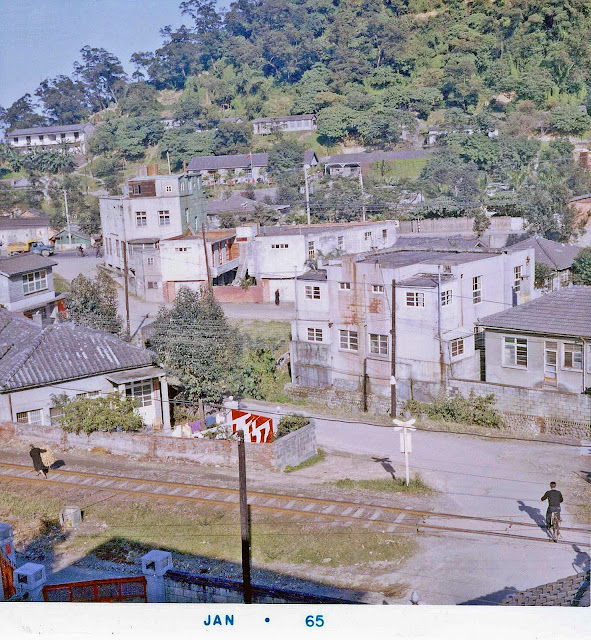 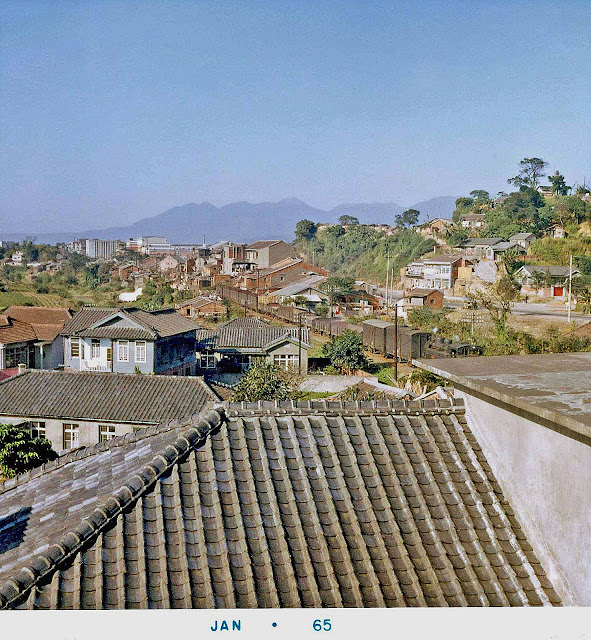 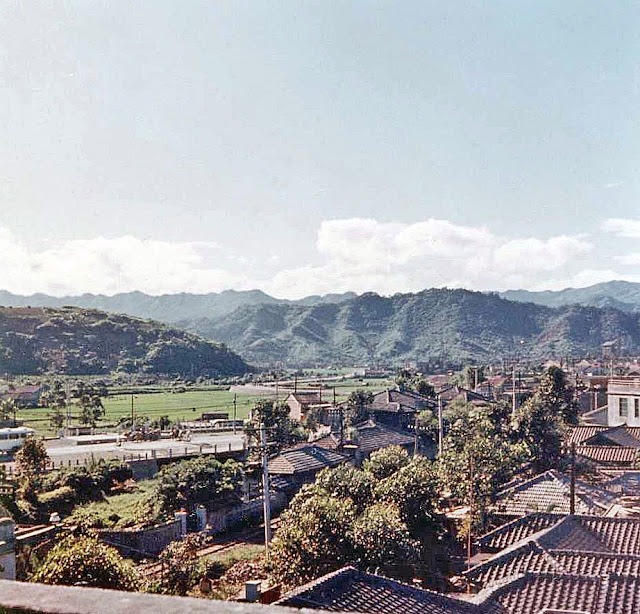 The Pool - the sweet feel of refreshment on a hot Taipei day!
.
Here's another photo sent in by Jim Caumo. This photo was taken before the new 3 story barracks was completed.
.
Photographs taken inside Taipei Air Station are rare.
Jim identifies the rooms you see across, fronting the pool as Bachelor Airmen Quarters.
.
If you notice, a number of antenna are visible above the roof. Those antenna sat on top of the Cotton Building, the 2165th Communications Squadron facility, kitty corner across the street.
Below is a photo of the "new", Air Station facility, taken probably in 1975, photo courtesy of Les Duffin.
If you look directly to the right of the water tower, you can see the Taipei Air Station swimming pool. (click on the picture for a larger view) The Pool, a refreshing stop on a hot day. NO RUNNING ALLOWED...... Photograph courtesy of Matt Edwards, Steeleville, Illinois American Legion Post.
Happy Birthday America. 1776 - 2008 ~~ 232 years.
.
No matter where you happen to be on the 4th of July 2008, you can always celebrate our nation's birthday.
.
I heard an announcement on ICRT Radio in Taipei today. A professional baseball game is being played in the Tienmu Stadium on Saturday, 5 July. If you bring your US Passport, your admission cost is only 100 NT.
.
Fireworks, the cookout and times of celebration with family and friends makes this day special each year.
.
Many of us spent at least one 4th of July in Taiwan. I recall July 4th1966, I was hired and began working that day at the MAAG Officer's Club Annex as a Night Manager. The club had arranged a huge party that afternoon and evening with traditional holiday food. It was a fun day even while working, entertainment, food, games, watermelon, prizes... what a first day at work!
.
That's what July 4th is all about, celebrating our country, being with family and friends.
.
May we live to celebrate another birthday, July 4th 2009. My best to you and your family.
.
Don't forget, next year on July 4th, we plan to be in Taipei. Please visit our site to review the travel plans. .
.
Posted by Taipei Air Station at 12:01 AM No comments:

Jim Caumo was stationed at Taipei Air Station in the 1963-1965 time period. He's sent in many interesting photographs from his collection.

Here, Jim and a friend stand by the entrance signage to the HSA West Compound.

We sometimes wonder which offices were located where. The list of some of the facilities is show here.
Posted by Taipei Air Station at 9:13 PM No comments: