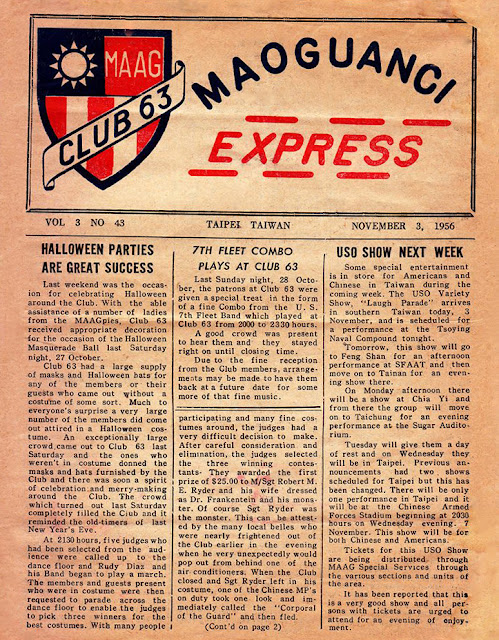 Many thanks to Scott Ellinger for sharing his copy of the Club 63 weekly newspaper.          Scott found this copy of the paper on Amazon. Oops it was eBay, per Comment below.

Because it's a weekly publication consisting of 12 pages, it was probably printed at a commercial printer.  No Xerox machines in 1956 I'm aware of.

Club 63 calls it a paper, something along the line of weekly newspapers printed in just about every town in the U.S. back in the 1950s.

Many of you that are old enough to remember the weekly papers will probably recall that most papers had writers in every small town around the area who sent in the "going-on's" in their communities.

The VOL. and NO. seen above, indicates the paper is in it's third year of publication.

Take a look at the article above, "USO Show..."

Interesting to see where the USO Show was performing on the island.

Monday evening - 4 November in Taichung at the Sugar Auditorium

Tuesday 5 November - the USO folks have a day of rest.

Tickets to the show(s) were distributed by MAAG Special Services. 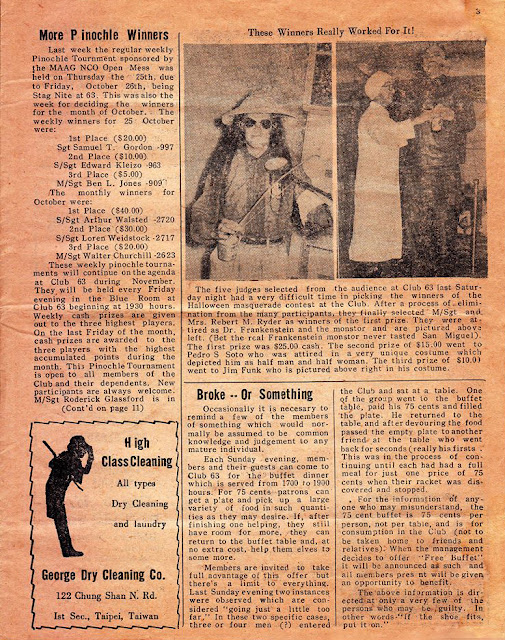 You gotta read the story above, "Broke - Or - Something...

These guys were living in the Hostel and bringing in lots of $ each month. Humm?

They misunderstood I guess? 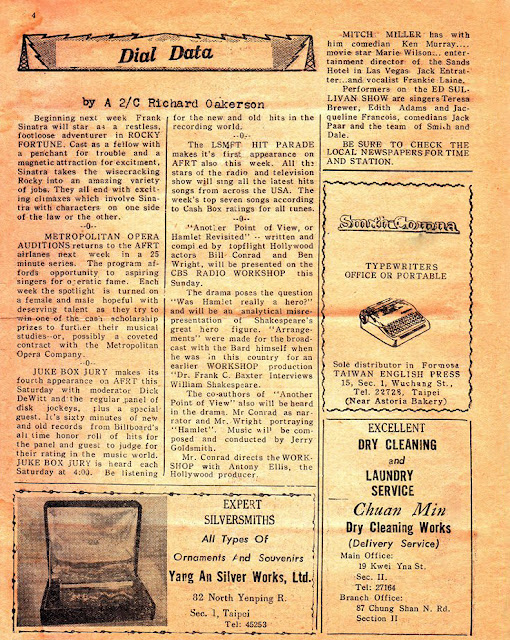 AFNT's article.  I noticed the LSMFT program was beginning.
Who remembers that program?
And, those initials - what do they stand for? Who Remembers?

And what about Frank Sinatra staring in a talkie radio program, I thought he was a singer? 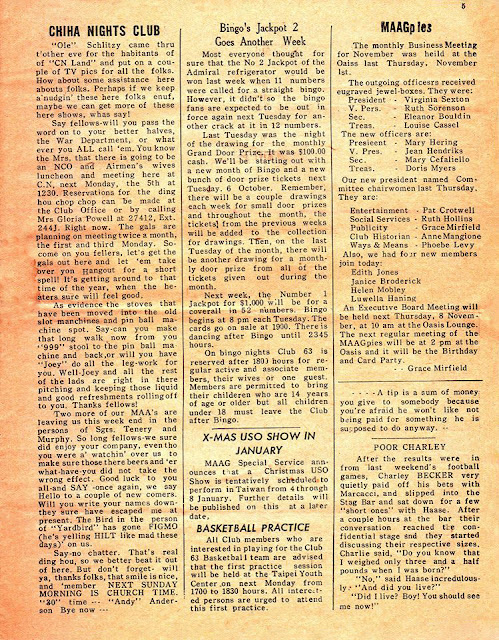 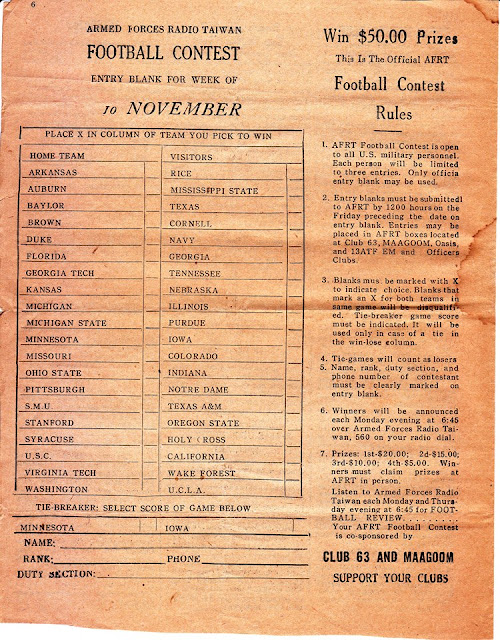 Why not play, it's free, nothing to loose, and someone wins. 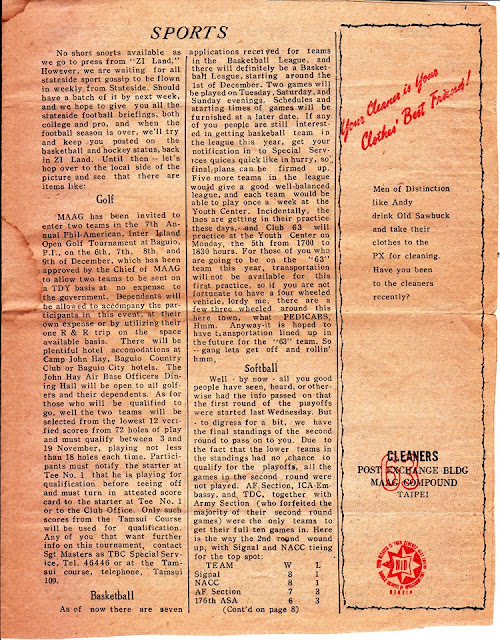 Notice the Exchange was the Post Exchange in the MAAG Compound in 1956. 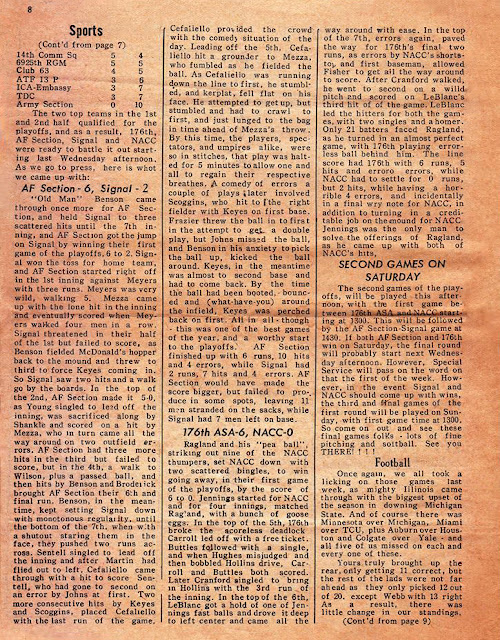 No problem listing all the team unit designations in the newspaper in 1956.
Notice a couple of teams that probably wouldn't want their names listed today. 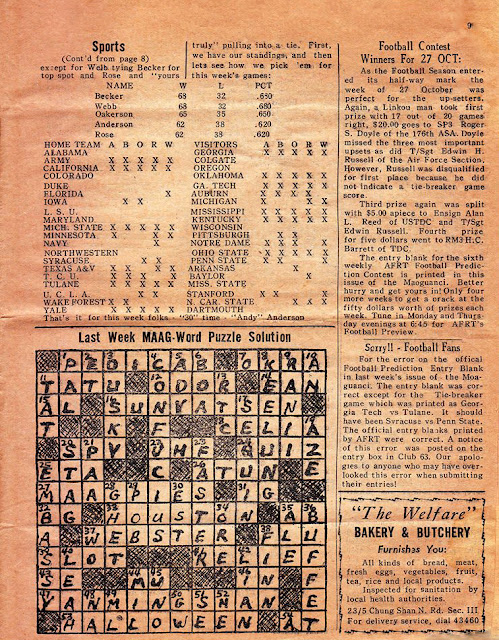 Someone in Taipei was drawing up the crossword.
Notice # 1 across and # 47 across....
Love to see another blank crossword drawn-up for Taiwan. 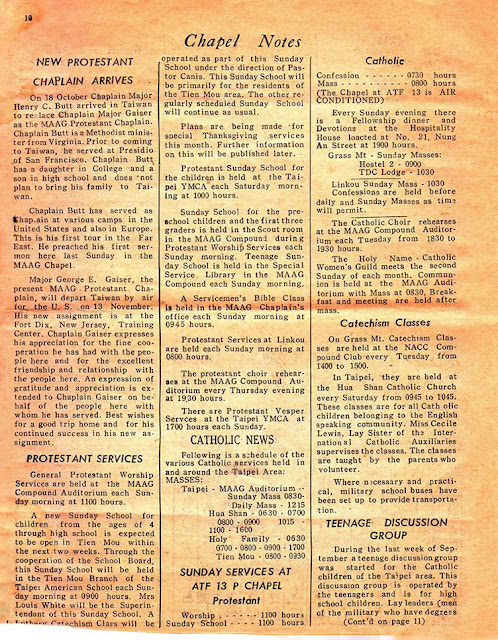 The Protestant Worship services are held at the MAAG Compound Auditorium.
Anyone know where the auditorium was located.
Maybe it's the new theater? 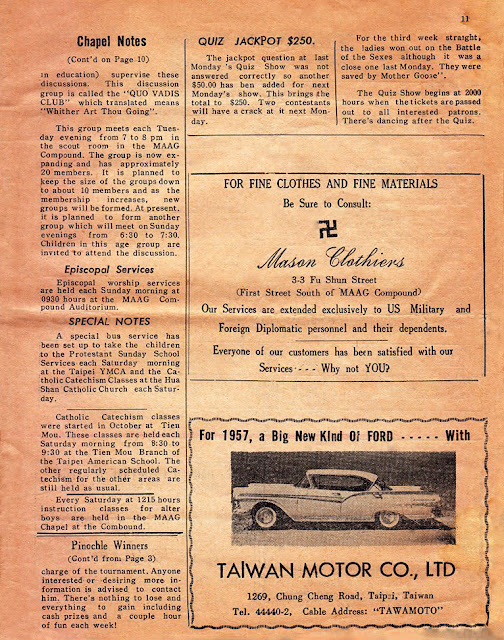 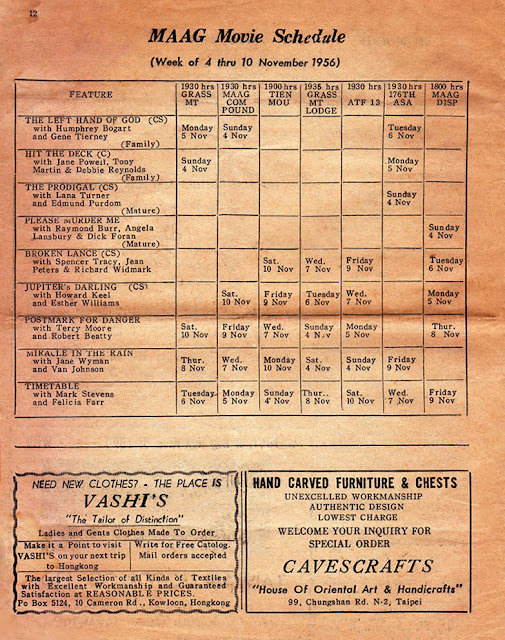 Notice where the movies are showing.

Grass Mountain Lodge?  That sounds like an interesting place.

Hope you enjoyed looking through what was going on back in the day...

Thanks again Scott Ellinger for sharing.

Posted by Taipei Air Station at 1:15 AM 2 comments: