I'm back from a vacation which was in an area where posting or viewing this blog was not possible.
I won't detail my impressions now, but I must say, the BEST part was the fantastic food served in the north . My Doctor scolded me for gaining 4 kilos in 6 weeks, I smiled and told her it was the Kung Pao Chicken, Peking Duck and sliced beef with green onions, all of my favorites. She smiled at me and agreed, telling me to watch my diet. Who watches their diet while on vacation?.........

John Crum, sent photographs of the Sea Dragon Club as it looked in 1969 when he was stationed in Taipei. John said that there were 2 entrances to the club, one side for R&R business and another entrance on the opposite side of the building for normal club activities, food and beverages. 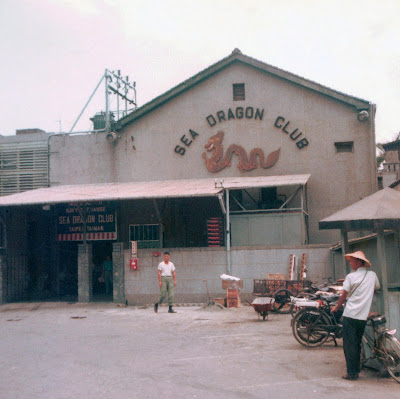 I remember visiting the club when it was the old Fleet Reserve Association Club, probably in early 1968. I was down there to see how the R&R Center operated.

I arrived as the latest plane load of GI's from Nam was being processed and sent out the door. I could not believe the number of taxi cabs parked along the street, local hotel representatives, and other assorted people standing around outside the fence. It was a regular "Mad House."

All in all, I suspect most of the GI's got what they wanted and had a good R&R in Taipei. 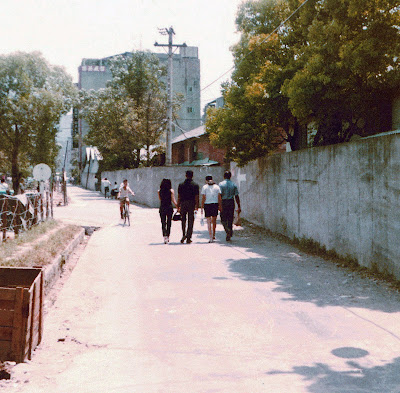 This photo shows two couples walking off down the street from the club. Were these two men R&R GI's?

I'm guessing they are walking south and the corner is Min Quan West Road. Your guess?

Can anyone point out where the old Fleet Reserve Club/R&R Center/Sea Dragon Club was located? Do you remember the railroad track which would have been west of the club, how far I don't recall. The railroad track is gone, and the MRT now occupies that right of way as it rises from underground to street level just in the area of the old club, I believe.

I walked down these streets a couple of months ago and the best I could figure out, the old club may have been located in the area now housing the Tatung Museum and offices. I believe the Tatung sign is still visible today. Back in the Day, you could see that sign if you looked south on Chung Shan North Road as you came out the NEX and Commissary Gate.

Another possibility, was the old club on the same street that skirted the Florida Bakery. That corner on the West side of Chung Shan North Road could have led to the club, although Tatung was also located in this area, I'm just not sure. 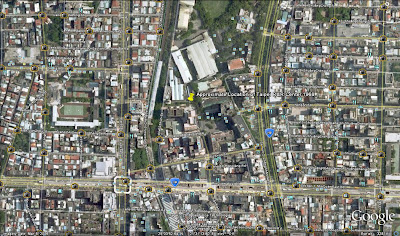 Here is the area where the old club was located. Can someone pin your best guess of the club's location please. I'm sure the streets have changed a little in the past 40 years also.
Posted by Taipei Air Station at 4:29 PM 6 comments: