Taiwan Railroading - Back in the Day

Loren Aandahl has spent a good part of his free time traveling around the island photographing its railways.

Why is this so special?  Loren arrived on Taiwan in 1954, a 1-year old boy and left Hsinchu after graduating from high school at Morrison Academy in Taichung, 16 years later, in 1970.

Loren grew up in Taiwan, spoke the language and knew his way around.  Loren's childhood years here were during the period of martial law and just about everything was "off limits" for photographs, including trains.

Loren took hundreds of photographs during his high school years and he recently published a book with the best of those photos.

You may remember Loren from some earlier postings on our Web pages.  Please read the Aandahl Family story and see the beautiful photographs of their life in Taiwan. Click HERE

You might enjoy watching an interview with a television reporter concerning his book. It's a really informative interview.  Watch it HERE

HERE is a Taiwan newspaper article on Loren's book.

I believe it was sometime in the early spring of 2009 when I first heard of the Taipei Floral Exposition. I was scratching my head, I understood the words, but a FLORAL Exposition?
It took a few months for the public relations folks to get their first videos up on You Tube to show us what was planned. It was an enormous undertaking.
The heavy 8 foot high steel fencing quickly went up along Chung Shan North Road, stretching from just south of the Keelung River Bridge down the hill on both sides of the street, until they touched Minzu Road.  The construction was beginning in the old HSA Compounds.
I know most of you folks who read my blog are aware of what happened to the HSA compounds after we departed.  They sat idle for a few years.  What should have happened, what you and I hoped for, didn't.  (Here's my loose explanation of what then occurred.)
The government, I assume Taipei City, cleared both sides of the street.  In the East Compound, they opened a large park and a museum.  In the West Compound a football (Soccer) stadium was constructed.  Just north of the West Compound, the whole area was cleared (including the old MAAG O'Club) all the way north to the Police Station. A park area was also planted on that large acreage.
I visited the east side park many times.  It stretched from just north of the old hotel on the corner of Minzu Road all the way up the hill until it ran into the new Museum.  The parks were nice. The stadium was used, but seemed in need of repair.
Through the past 2 years or so, I have walked the sidewalks on both sides of Chung Shan North Road many, many times. What do they call guys like me, sidewalk supertendants? Heck, I have never seen a Floral Expo, I was interested in watching it come up, unfortunately, the 8 foot fence was too high to see over. I would stick my camera over look around and snap a picture now and then, but it was a mess until a week or so before the opening.
One day last fall, the fencing began to come down and before we knew it, the Expo opened.
I guess the biggest surprise was seeing the US Flag posted on one of the Expo buildings prior to the opening.  It sat right along the south side of the East Compound, fronting Chun Shan North Road. I had a couple of Blog posts on our US Expo building. The flag was displayed on the sides of our Expo building at the very top, easy for all to see. Many a heart has felt a tingle seeing our beautiful flag standing tall once again in Taiwan.
I've said all this to tell you that the time has come, to once again close down the old HSA Compounds.  It's kind of like our lives, we flower, show and  pass.
But soon, new life will appear on our old stomping grounds, on Ilha Formosa. 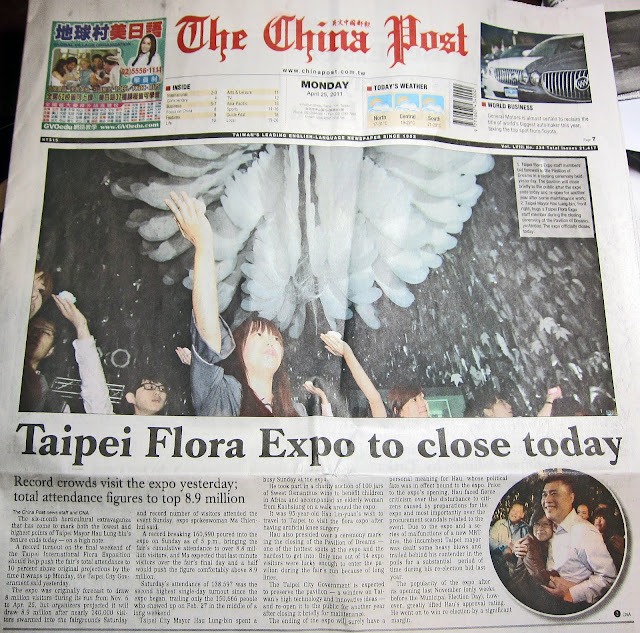 Please take a few minutes to read the above article from the China Post HERE
Take a peek at the photo in today's Taipei Times showing the crowd at the  Floral Expo yesterday. 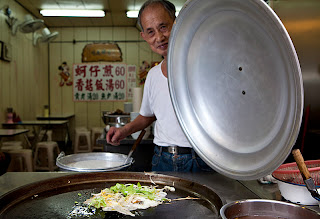 ADDED:  The local newscast this evening showed some of the 140 plus Food Carts serving food to visitors at the Floral Expo today.

No food vendor carts had been allowed inside the Floral Expo areas until today.

This old fellow is preparing a nice looking wrap sandwich.  That stove is mounted on a wheeled cart. 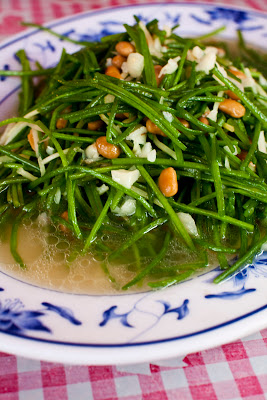 And here's dish of greens, beans and probably some type of fish.


Are you hungry for one of these.. or maybe a hot bowl of noodles in a wonderful soup base.


Ahhhhh, things are good in Taiwan...

Both Taiwan food photos from the Internet, not the Floral Expo. 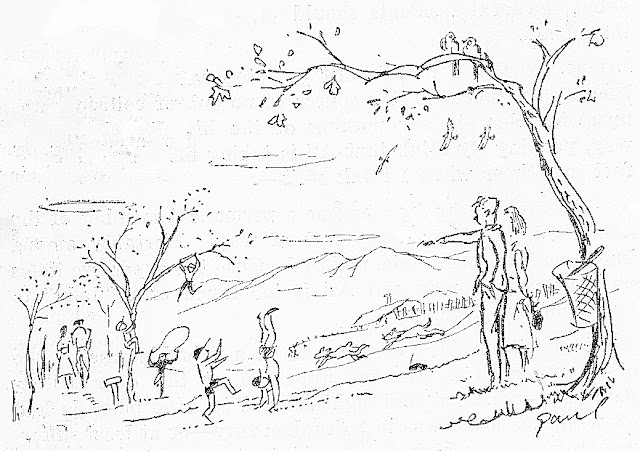 ROUGE SPRING, ROUGE APRIL
What strikes us on these early April days in Taipei?  What causes the sky to shimmer like a burnished dream, and the sun to peek out early in the morning and linger later, with the day being loath to go for the shortening time when the sun comes out again?  It is the season of the year.     For it is springtime and it is April and even though a chill is on the distant hills the color in the evening sky spells beauty in the hours.   The colors of sunset red upon the breathing ocean swells turn to brilliant orange and finally blushes into pink feathers upon the clouds.     The soft winds play upon the days and hours, surging and fluttering the way a harp would play, but there is no sound, only the melody.  It is then, the rhythm of spring that old folks recognize and which makes them smile with memories and with joy.     It is the young people who must know it is spring in Taipei, for it is the season of the young.  To them nothing brings joy to the heart like the coming of spring.  Those who might be blind throughout the long and weary year are like to open their eyes then, and the sunrise takes them while they  are after being charmed by the tiny, virgin flowers stretching hands up between the stones toward where the birds twitter upon the boughs of the trees.     This is the time when the young people, a little younger than the old and a little older than the very young begin to preen and prance and the young girls become apt to blush and stammer over every “good morning” which is given to them.  And then young men do talk in loud voices and flex their muscles while they walk stiff-legged and swaggering down the street.  And they make great show of trimming the winters’ growth of fuzz from their chins with small scissors, explaining seriously that to shave makes the beard grow faster and clipping stunts the growth.     Which may be true, but no matter how they clip, there somehow always remains a mustache which is vaguely reminiscent of so many Clark Gables or the like.  And even with the younger males there is much standing on hands and riding of bicycles with the feet on the handlebars – or some other dangerous stunt which is designed to impress the fluttering hearts of the demure female admirers.     And these are often wont to watch in admiration only to toss their noses into the air and walk away if they think that someone is watching.  And it is this that causes no end of broken hearts, to say nothing of various other sundry bruises and hurt as the little roosters try to out crow one another.     And we, the older and wiser ones, are happy with the season which has come like a blanket of fragrance over Taipei, for springtime is truly in the air these days.  Even the days of rain and wind carry the overpowering sweetness of the bursting buds of green trees from Grass Mountain.       And we can sympathize with the restless dogs who ramble from their comfortable winter spots to walk the streets for a chance after chasing some stray rabbit which instinct tells them may be hopping down Chung Shan Road.  For he says to himself, it is a time for fun for a dog who has not had such a chase for the whole winter long.     And we are suddenly joined by the little birds who twitter in the trees and we wonder what brought them here in this rouge April.  And we can imagine them somewhere in the south muttering:     “A wonderful place this, sure and comfortable with the green trees – but wife, do you recall the little boys in Taipei who try to catch us and the silly cats as well, and how happy everything was?  Shall we go back there for a spell of summer, woman? Our wings are stretching strong this day so lets away!”     So spring is here.  Rogue spring and rogue April.  Another spring to wrap into our memory book with all the other springtime’s we have known.


Joe Brooks writes of Taipei as it was in the mid 1950s when this article was written.
Find more information about Joe Brooks and this series of articles HERE
Posted by Taipei Air Station at 3:36 PM No comments: