Best wishes from the folks at Taipei Air Station.

Check-in frequently for more stories and photos from around the island as we remember our assignments in Taiwan, Back-in-the-day.

Posted by Taipei Air Station at 7:25 AM 2 comments:

It's the time of year when we come together to celebrate with family and friends.

For me, it's the best time of year.

I hope this Christmas overflows with joy and happiness in your life.

My heartfelt thanks to each of you.  Your support and help is sincerely appreciated.

May God Bless you.

My friends, Merry Christmas to each one of you....

I don't have any new materiel to present this Christmas.

Perhaps you might have some photos in your files you could share with others.  Please send them in.

Many new folks reading these pages may not have seen our Christmas Post from last year, so I've decided to link some previous Christmas posts below.


Hope you'll find a reminder of Christmas days you spent in Taiwan.

If you would like to see other Christmas posts on our Taipei Air Station Blog, go to the search box, which is located along the right hand side of the blog, type in the word,  Christmas.

A list of posts from earlier years will appear on top of the blog.

Drifting a bit off subject today, knowing many readers of this blog are in retirement or will be shortly, I thought it appropriate that this piece be passed along to those experiencing or contemplating retirement.

The writer was not identified (probably too embarrassed.)


A Few years ago, my wife and I moved into a retirement development on Florida's southeast coast. We are living in the "Delray/Boca/Boynton Golf, Spa, Bath and Tennis Club on Lake Fake-a-Hachee". There are 3,000 lakes in Florida; only three are real.

Our biggest retirement concern was time management. What were we going to do all day? Let me assure you, passing the time is not a problem. Our days are eaten up by simple, daily activities. Just getting out of our car takes 15 minutes. Trying to find where we parked takes 20 minutes. It takes a half-hour in the check-out line in Wal-Mart, and 1 hour to return the item the next day.

Let me take you through a typical day: We get up at 5:00 am, have a quick breakfast and join the early morning Walk-and-Fart Club. There are about 30 of us, and rain or shine, we walk around the streets, all talking at once. Every development has some late risers who stay in bed until 6:00 am. After a nimble walk, avoiding irate drivers out to make us road kill, we go back home, shower and change for the next activity.

My wife goes directly to the pool for her underwater Pilates class, followed by gasping for breath and CPR. I put on my 'Ask me about my Grandchildren' T-shirt, my plaid mid-calf shorts, my black socks and sandals and go to the clubhouse lobby for a nice nap.

Before we know it, it's time for lunch. We go to Costco to partake of the many tasty samples dispensed by ladies in white hair nets. All free! After a filling lunch, if we don't have any doctor appointments, we might go to the flea market to see if any new white belts have come in or to buy a Rolex watch for $2.00.

We're usually back home by 2:00 pm to get ready for dinner. People start lining up for the early bird about 3:00 pm, but we get there by 3:45 because we're late eaters. The dinners are very popular because of the large portions they serve. We can take home enough food for the next day's lunch and dinner, including extra bread, crackers, packets of mustard, relish, ketchup and Splenda, along with mints.

At 5:30 pm we're home, ready to watch the 6 o'clock news. By 6:30 pm we're fast asleep. Then we get up and make five or six trips to the bathroom during the night, and it's time to get up and start a new day all over again.

Doctor-related activities eat up most of our retirement time. I enjoy reading old magazines in sub-zero temperatures in the waiting room, so I don't mind. Calling for test results also helps the days fly by. It takes at least a half-hour just getting through the doctor's phone menu. Then there's the hold time until we're connected to the right party. Sometimes they forget we're holding, and the whole office goes off to lunch.

Should we find we still have time on our hands, volunteering provides a rewarding opportunity to help the less fortunate. Florida has the largest concentration of seniors under five feet and they need our help. I myself am a volunteer for 'The Vertically Challenged Over 80.' I coach their basketball team, The Arthritic Avengers. The hoop is only 4-1/2 feet from the floor. You should see the look of confidence on their faces when they make a slam dunk.

Food shopping is a problem for short seniors, or 'bottom feeders' as we call them, because they can't reach the items on the upper shelves. There are many foods they've never tasted. After shopping, most seniors can't remember where they parked their cars and wander the parking lot for hours while their food defrosts.

Lastly, it's important to choose a development with an impressive name. Italian names are very popular in Florida. They convey world travelers, uppity sophistication and wealth. Where would you rather live: Murray's Condos or the Lakes of Venice? There's no difference -- they're both owned by Murray, who happens to be a cheap bastard.

I hope this material has been of help to you future retirees. If I can be of any further assistance, please look me up when you're in Florida. I live in the Leaning Condos of Pisa in Boynton Beach.

What do they say?, Laughter is the best medicine....


Posted by Taipei Air Station at 6:58 AM No comments:

While I was visiting Taiwan this fall, the folks who handle the Taipei Air Station Web Pages moved the storage location of the site to another server.

Changing the location, necessitated a change in the Internet address.

Everything is back in order, and the Web Page is again operating. 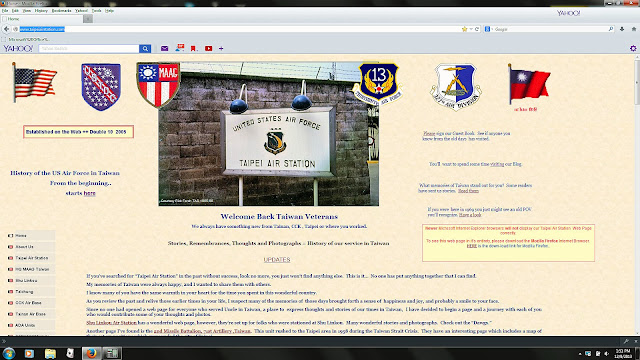 If you would like to visit the web pages ->  HERE


Posted by Taipei Air Station at 5:34 PM No comments:

A Sunday – Off Subject - “Bi-Lingual” Smile!

I received this little story in the mail. It was too good to pass up - I hope you enjoy it.
Translation courtesy of a previous reader.

George Phillips, an elderly man, from Walled Lake, Michigan, was going up to bed, when his wife told him that he'd left the light on in the garden shed, which she could see from the bedroom window. George opened the back door to go turn off the light, but saw that there were people in the shed stealing things.


He phoned the police, who asked "Is someone in your house?"


He said "No, but some people are breaking into my garden shed and stealing from me."

他說：“沒有，但那些人正闖入我花園的小屋裡偷東西。”
Then the police dispatcher said "All patrols are busy. You should lock your doors and an officer will be along when one is available."

喬治說，“好吧。”
He hung up the phone and counted to 30. Then he phoned the police again.

"Hello, I just called you a few seconds ago because there were people stealing things from my shed. Well, you don't have to worry about them now because I just shot and killed them both, the dogs are eating them right now." and he hung up.

Within five minutes, six Police Cars, a SWAT Team, a Helicopter, two Fire Trucks, a Paramedic, and an Ambulance showed up at the Phillips' residence, and caught the burglars red-handed.

One of the Policemen said to George, "I thought you said that you'd shot them!"

George said, "I thought you said there was nobody available!"

Sometimes it's necessary to think "outside of the box."
Posted by Taipei Air Station at 8:14 AM No comments: