Brad Carpenter now residing in Minnesota forwarded an e-mail recently recounting his feelings of Taiwan. So many of the letters I receive have the same thread running through them. Taiwan truly shaped many of our hearts with everlasting impressions of wonder and joy.

My father was stationed as a captain and then major at MAAG from 9/72 - 6/75. I was a mere child at the time, growing between the ages of eight and three-quarters and eleven and one-half, but I too am deeply indebted to the memory and experience of my time in Taiwan.

I attended Taipei American School between the third through fifth grades. I can find but two scant YouTube videos to remind me of the location; the school moved to a new locale in 1989, and the old site is dilapidated and will, I'm sure, soon cease to exist. My memories are more similar to yours than we might imagine - chasing girls, who did not yet know if they wished to be caught or not; playing baseball, whether with local Taiwanese children (this was during their Little League hegemony, mind you!), American kids, or my dad.

The thrill of wandering - as adults, the term would metamorphasize into, "hiking" - along the Tien Mu trail, with a perpetual eye scanning for haboo, or pit vipers lurking evanescently in the green shoots of ever present bamboo. The seemingly secret knowledge of the whereabouts of a remote and pristine water fall, location reachable by Huffy or Converse only, where uncounted "young men" would lurk about in caves and occasionally thrill to the sight of amorous Taiwanese couples who would venture covertly to the spot, unaware and uncaring of their youthful voyeurs.

I have friends, neighbors - even family - who this day do not understand why I sometimes grow nostalgic, and melancholy, over my inability to grasp tangible evidence of my Taiwan experience. My sense of loss at childhood friends forever absent confuses, and possibly annoys, them.

"If you chose to cease being friends - that's either their call or yours," they say. "You can't go online and seek these people out - that's indecent and obtrusive," they add.

But I wonder, always. My decisions were not my own to make, as a young boy. My friends, subject to the same rules of military rotation as I, were never constant. But they were dear. "Serving my country" as a dependent did have a great affect on me through a child's level maintenance of a topsy-turvy inconstancy. I continue to seek out those names that I do recall, if only in the hope that I might grant an element of - hopefully - warm imagery and cheery reminder to those with whom I've shared that special Taiwan experience.

Thank you for sharing yours with me.

Last Friday, 10 October, was the anniversary of the "Taipei Air Station" web site, not to be confused with this Taipei Air Station blog. You can jump to the web site by clicking the link just above my Air Force photograph on the right side of this page.

I was reluctant to step out 3 years ago, but no one had come forward in more that 20 years to tell the stories of those of us who served at Taipei Air Station and other places in Taiwan. My friends at the Shu Linkou have been taking care of business at the Shu Linkou web site for many years, but they only covered Shu Linkou.

As I have said many times, I am in love with Taiwan. I am a fellow who grew up in Texas, but Taiwan is the home of my heart.

So, 3 years ago, I ventured out with the new web site, Taipei Air Station.

There have been so many folks who have sent kind words and encouraging emails during the past 3 years.

I must also say, I have had so much help from friends I met on line via the TaipeiAirStation@Hawaii.rr.com email address. Many folks mailed in photographs, told their stories of happiness and heartache. We all have a story to tell, consider sending your story in.

Thank you for helping me tell our stories and present those photographs long stuck away in your stuff.

My thanks and best wishes to each who read this post.

May your life be filled with riches and joy.

Thank you for helping me.

Posted by Taipei Air Station at 1:00 AM No comments:

Here is another article written for the "Taiwan Panorama Magazine" which discusses the same housing area once occupied by US military personnel. Please note, there are 5 pages of the article. just keep clicking the "Next" arrow at the bottom of each page.

It appears the Taiwan Government is designating the old housing area in Yangmingshan a cultural landmark.

Both articles are interesting reads.

My best wishes to you and your extended families this "Columbus Day."

Can someone please give the Google Earth coordinates of this old housing area. The new Google Earth images of Taipei should provide good views of the old homes.

The 228 Peace Park of today, has been called a number of names since the area was designated a park in 1908.

All of these photographs courtesy of Jim Caumo and Les Duffin.They were taken between 1962 and 1966. 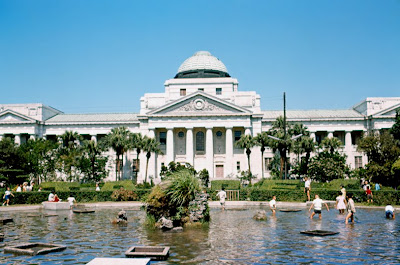 On the park ground stands the beautiful National Taiwan Museum. Their web site is here. 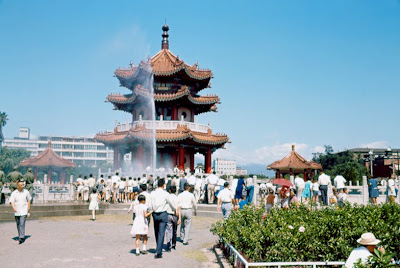 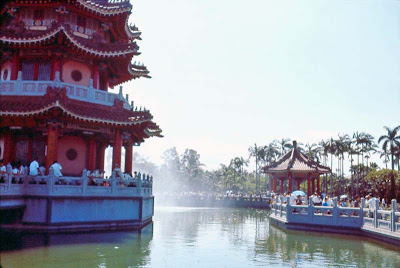 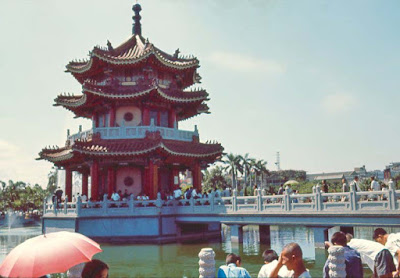 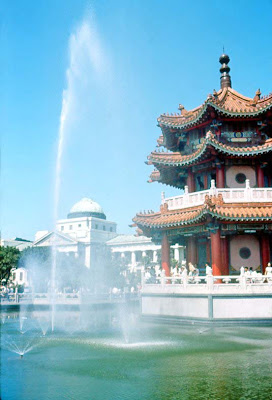 I found this information on Wikipedia: "In 1930 Taiwan's Japanese rulers established a radio station at the site. The station initially housed the Taipei Broadcasting Bureau, an arm of the Government-General Propaganda Bureau's Information Office. The following year the Taiwan Broadcast Association was formed and given responsibility to broadcasts island-wide. The Taihoko Park radio station became the center of broadcast activity for the Association."
Look closely at the above photograph, taken in 1964, the radio antenna is standing tall, directly over the palm trees. 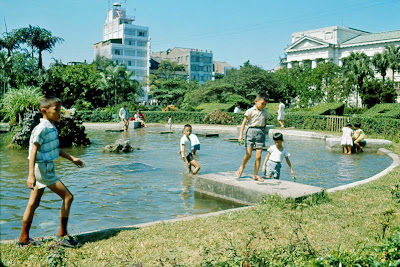 Children are always finding fun things to do. Who could resist a chance to jump into the pool.

Taiwan: The Other China 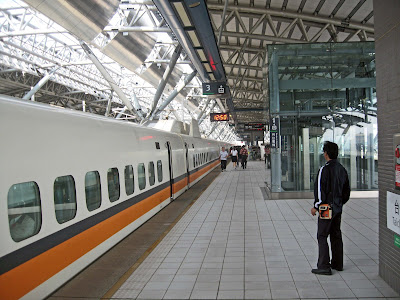 I boarded this High Speed Rail car in Taichung on my return trip to Taipei last fall.

Found this interesting in-depth article in the October 2008 issue of Conde Nast Traveler Magazine. You can read it on their web site.
THE OTHER CHINA.. "Taiwan was once an affront to the mainland, a repository of everything Mao wanted to wipe out. Now, as bonds between the two are rebuilt, Dorinda Elliott finds an island confident, free-and rich in experiences both spiritual and hedonistic"..

Central Park to anyone stationed in Taiwan, was renamed 228 Peace Park in 1996.

Here is a map showing the location of the park, northeast of the Presidential Office Building. Located in the park, is the National Taiwan Museum, not to be confused with the National Palace Museum, the large museum of Taiwan. 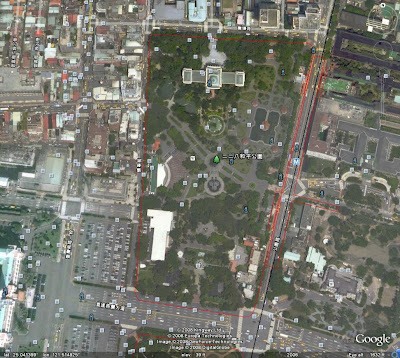 This bust of General Claire Lee Chennault was located in the park when this photograph was taken by Jim Caumo in 1964.

Can someone familiar with park as it stands today let us know if General Chennault's Bust and the description plaque are still standing in the 228 Park today.

My friend Hank, who lives in Illinois sent in details on General Chennault's statue:

Hualien (Cha Shan) Air Base now houses the 401st Tactical Fighter Wing (401聯隊) flying F-16A/B. This unit was associated with the Chinese American Composite Wing CACW, which General Chennault was involved with during World War II. The museum is not open to civilians except during Open House which occurred earlier the summer.

General Chennault was quite a fellow. This web site was interesting.

I now realize that I have not even scratched the surface of WW II and the Chinese/American joint war effort against the Japanese in CHINA.

This cooperation effort was tremendous and I am sure this was one of the reasons we who served in Taiwan were so welcomed and enjoyed the response we encountered everywhere! Your ideas on this?

Note: I have seen Hualien referred to as Air Base and Air Force Base. Does anyone know the correct terminology for Hualien?

In an e-mail from MND, the correct designation of Hualien is "Air Base."