Taipei's Club 63,  for many single and unaccompanied personnel, served as a
"Home away from Home"

Club 63 offered more than a cold beer and good food.

There was always something going on at Club 63....

Friday's - Mongolian BBQ, Floor Shows, Monte Carlo Night, Men's Night
and "In and Out" Reception for Arrivals and Departees.

Dinner,  chits for 4 Alcoholic Beverages, all on the House.
After dinner and a "few" of those free drinks,
the Emcee would Introduce a 'Risque' Floor Show.

Changes to the schedule would take place, but there always was something
happening, to help draw you back to Club 63.

During the warmer months of the year - The Swimming Pool was open.

Our beloved MAAG NCO club in Taipei officially operated as:

Frank carried his Red Cross Card of certification as a "Lifeguard"

He worked at the Club 63 Pool as a Lifeguard during his off-duty hours.

Sometime after working the Lifeguard position, he was asked to help with teach swimming lessons.  Club 63 taught many Club members children to swim, and Frank was instrumental in teaching many children and adults to swim at the club pool. 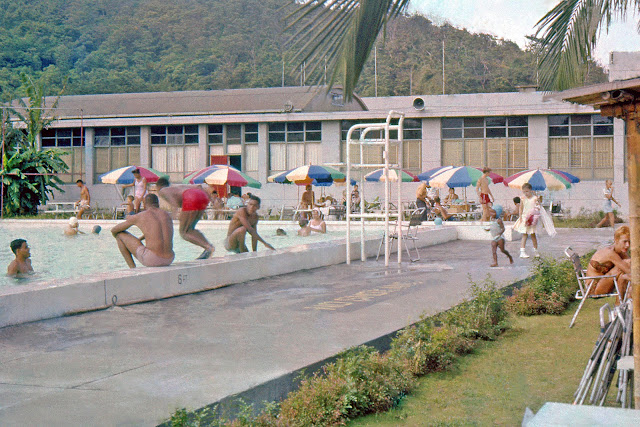 A lazy afternoon at the Club Pool. 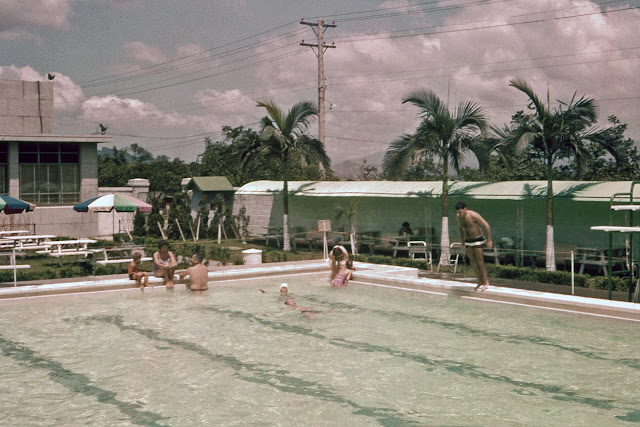 Look at those Big billowy clouds, the cool water, what a day in Taipei.. 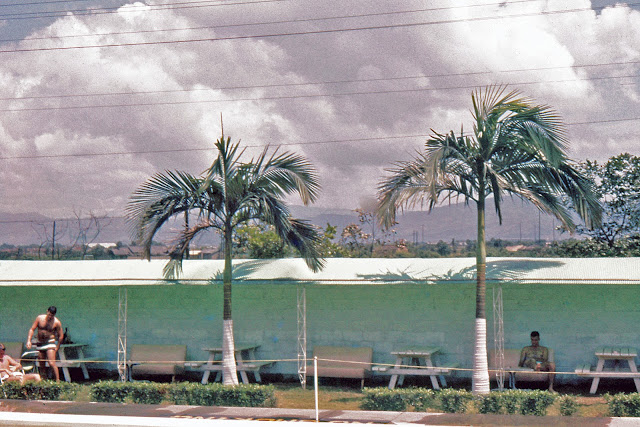 A great place to relax under the shade, hide from the sun.

The Keelung River was about 40/50 yards on the other side of this wall. 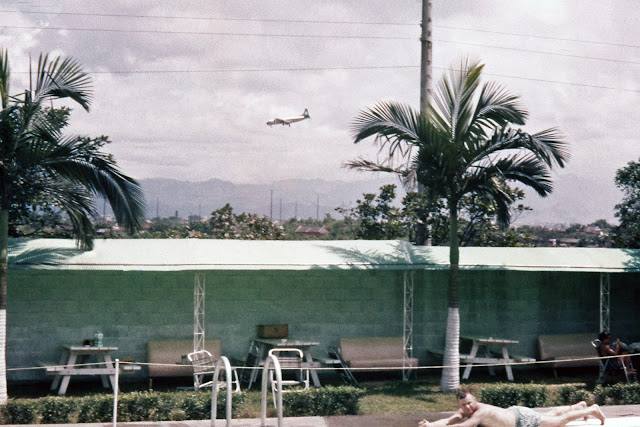 Look at that aircraft on approach to the airport.
I'm going to guess it's a DC-6, civilian airliner.

I don't recognize the tail, perhaps someone knows what airline it is. 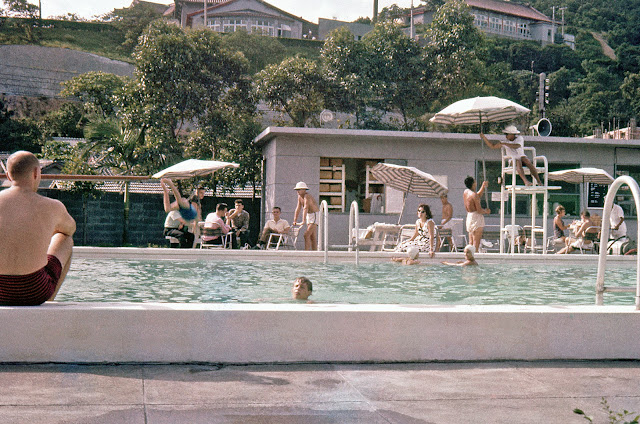 That's NOT Frank on the Lifeguard stand.  It looks like the Life Guard is situating the umbrella into the stand.   It can get awfully Hot up on that chair without shade.

There is also a Lifeguard standing back toward the open window, he's wearing a White Pith Helmet, as is the other Lifeguard on the "high" chair under the umbrella.
In this group of photos, we can clearly see the "Old" Grand Hotel. 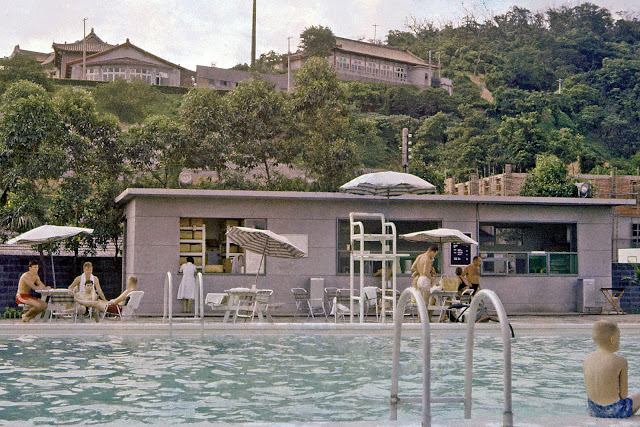 A different view of the Snack Bar, to the right of the building across the pool.

What was that window on the left side?  Looks like a bunch of baskets inside, Hummm, could you drop off you street clothes at the window? 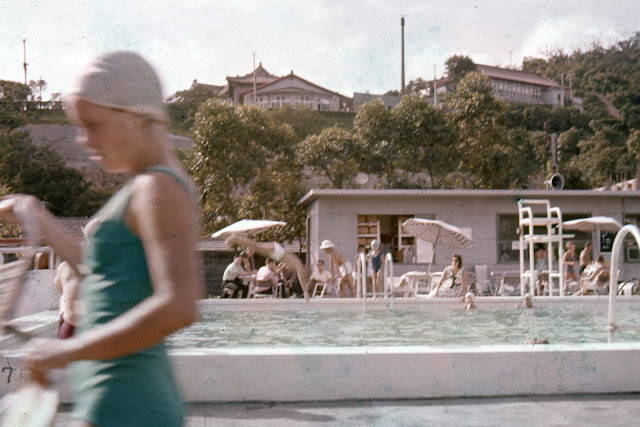 A girl walks in front of the camera, a man is diving into the pool just to the left of the girl here wearing the cap, a life guard is talking story with some men over by the building.

I'd love to be sitting at that table across the pool, nursing a cold San Miguel Philippines. 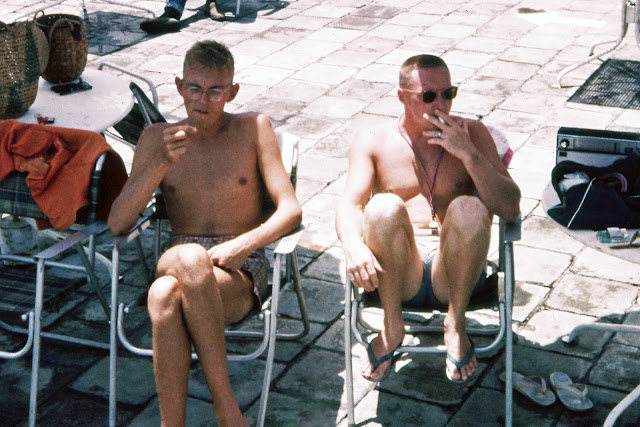 A couple of "not yet on Duty" Life Guards waiting to go on-duty, resting in the pool area. 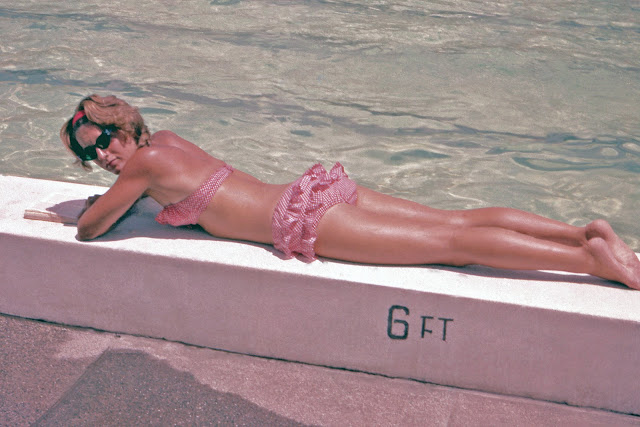 This girl was a dependent who liked Club 63, had a boyfriend Lifeguard here.
I guess she's wearing the 1963 version of a bikini. 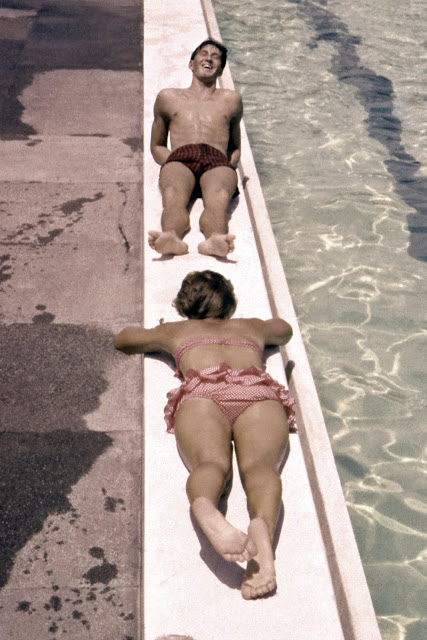 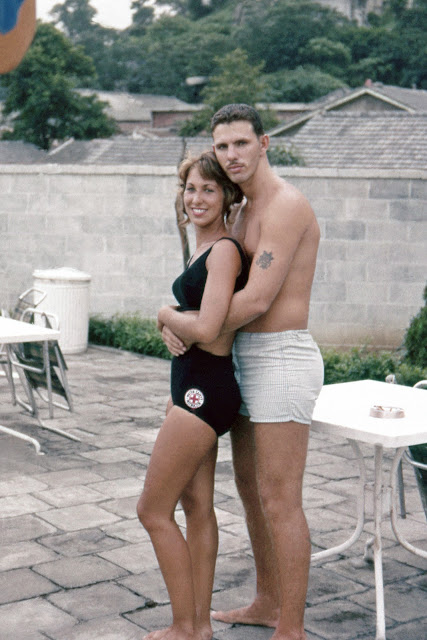 Another lifeguard, with her boyfriend, Club 63.

Anyone recognize the beer listed above Foster?

Frank also has the House Rules of Club 63.
If you'd like a copy, Email me: 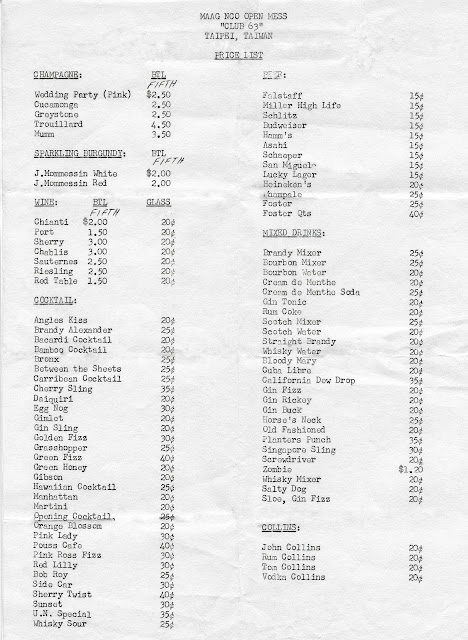 I want to thank Frank Smith for sharing so much of his story while assigned
to Taipei.

His photos have helped keep the History of the United States Military in Taiwan available for all time.

There are few people that would not say, in some way,
"My time in Taiwan were some of the best days of my life"