Your Vote in the November Elections

With the approaching November elections, you might want to consider looking more closely at the candidates in your district.  Most of us are interested in Taiwan and it is important to know how our representatives voted on Taiwan related issues.
The information below comes from the American Citizens for Taiwan web page.

Posted by Taipei Air Station at 1:12 AM No comments:

Keelung - More than a Liberty Call for US Navy Ships

If you think about Keelung, what comes to mind?

Keelung Harbor.  The end of a long journey across the Pacific on a US Navy Transport Ship.

Below, the USS General J. C. Breckinridge, tied up at Keelung Harbor, circa 1968.  On board, new folks assigned to duty in Taiwan.

If you were the sponsor of an in-coming family, you would drive to Keelung in a military vehicle, some folks drove their POVs, depended on how many people were arriving,  wait at the pier to greet the new family, and take them to their hotel.  Traveling back to Taipei on the MacArthur Thruway, the new family had time to sit back and relax,  ease some of their nervousness, and get many of their questions answered about Taiwan and where they were going. That first day and night was often demanding.

Aother reason you may be in Keelung, to pick-up your POV.

As I recall, you were notified by HSA transportation when your POV was on a ship and enroute to Taiwan.  You then visited HSA and picked-up paperwork that would allow you to process your car through the custom's office in Keelung.  When it arrived in-port, you were notified when the vehicles would be available for pick-up.

Who else might visit Keelung?  Sailors and Marines.  Although Kaohsiung may have been a more popular port for liberty, Keelung was close to Taipei and more night life was available, as well as the large Navy Exchange.

For those folks who found themselves in Keelung with money in their pockets and a craving a cold beer, their choices were few.

These Keelung "business cards" are courtesy of Doug Price, US Navy. 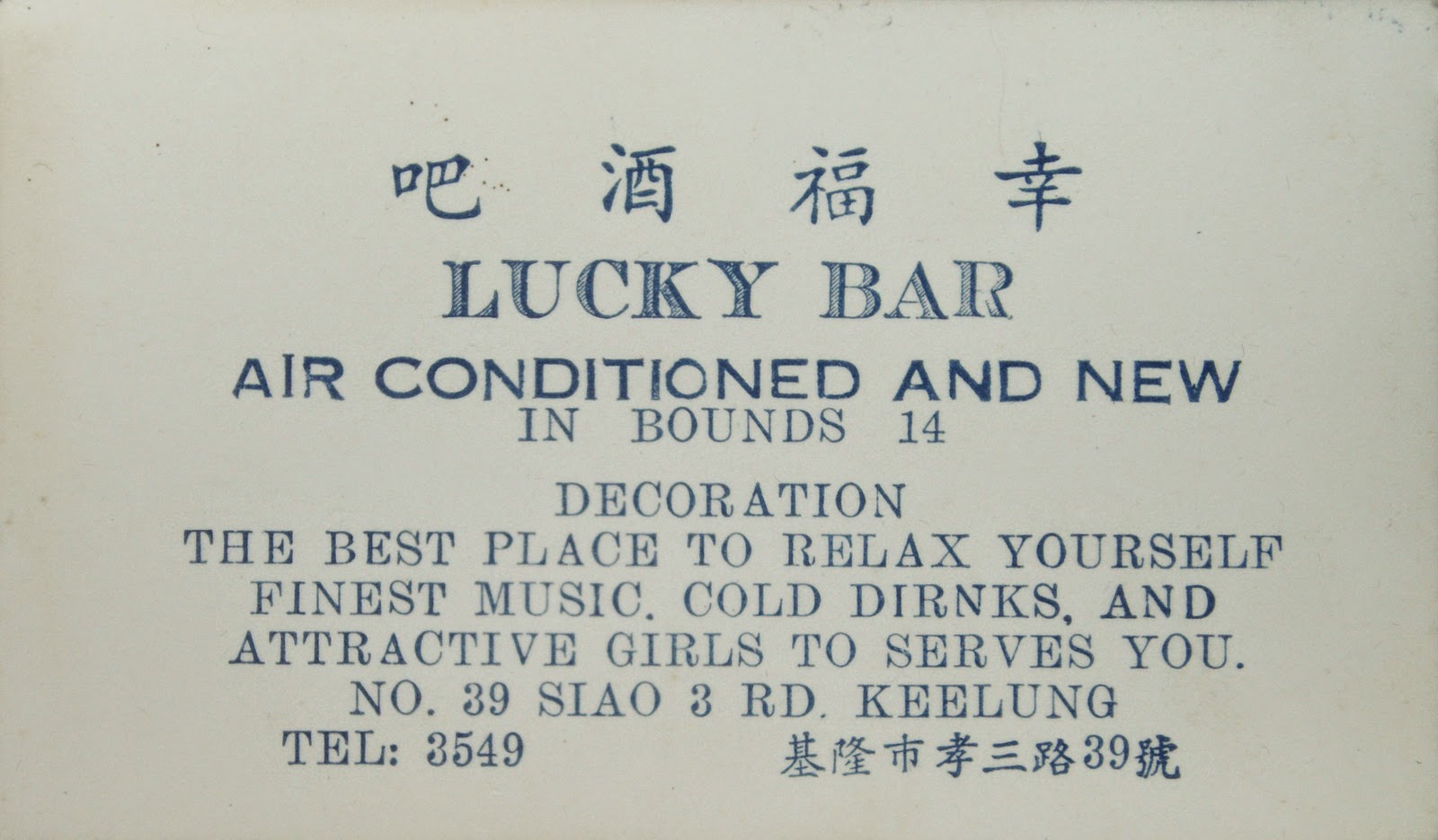 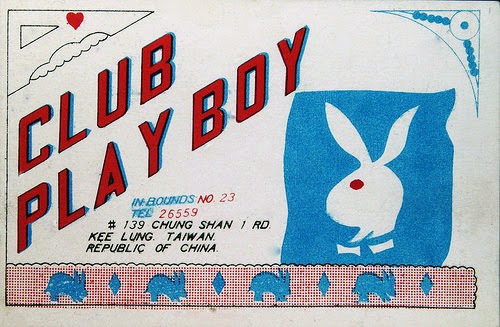 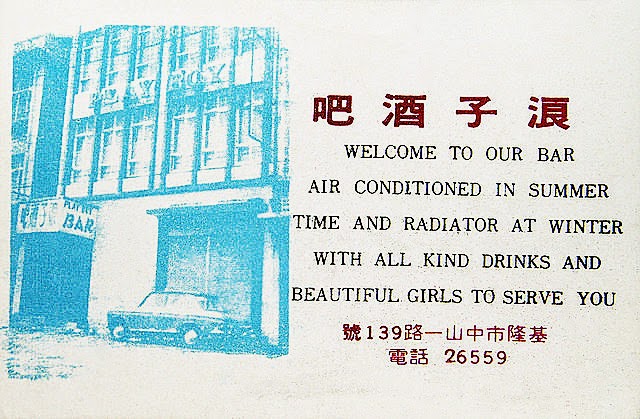 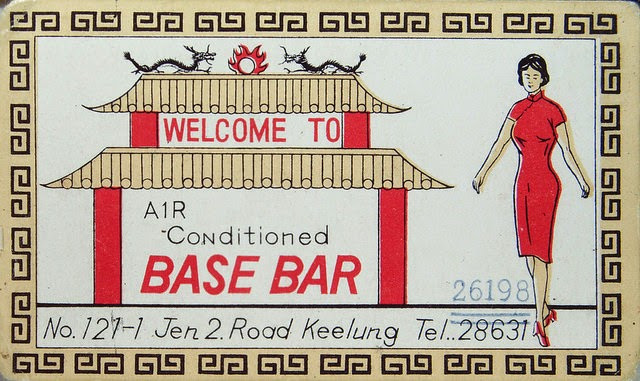 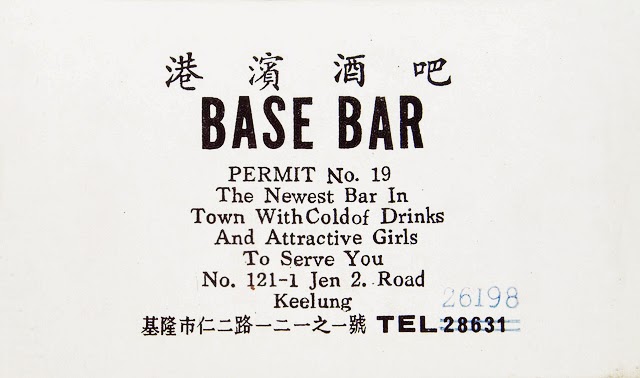 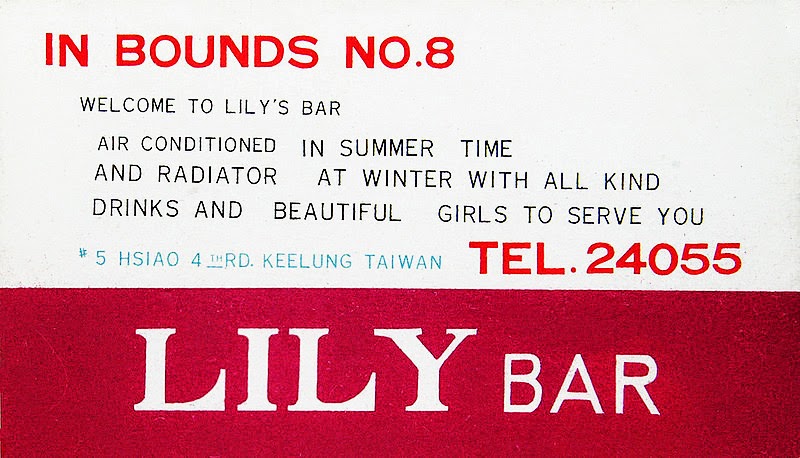 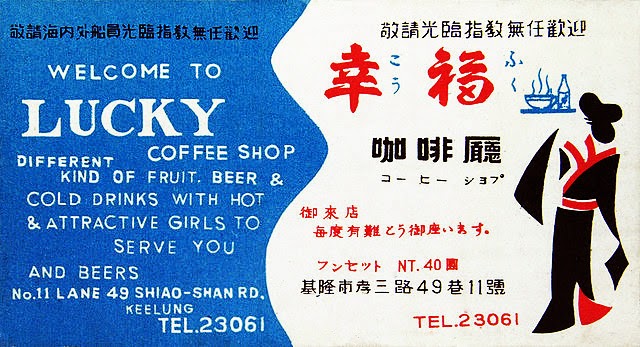 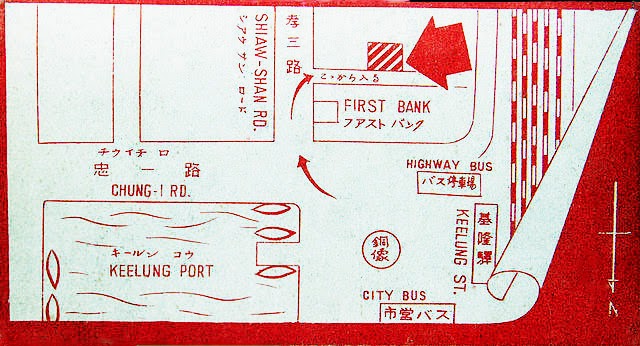 Through the years, many clubs opened and closed, and, there were probably a few more places Doug wasn't able to visit.

Like anywhere else, if you get enough business to make a profit, you operate, if not, you close down.

While researching this story, I ran across this link, to a book written by Steve McQueen's wife who was apparently on location in Keelung during the filming of The Sand Pebbles. The Keelung and Taipei part of the story begin at page 120 of the link above.


Let's leave with the trailer for The Sand Pebbles.

More history from of our time in Taiwan.....