How many times did you pass through this gate during your time in Taiwan? Too many to count I'm sure.
If you were at Taipei Air Station prior to the late 1960s this was the gate you used to enter the Air Station.

I recently received a binder, heavy with documents and photographs unfolding the history of the United States Air Force on Taiwan.

Prepared by Mr. Terry Sherwood, Historian, 327th Air Division, in January 1970, this history describes most of the Air Force movements in and around Taiwan, including a number of black and white photographs going back to the early 1950s shortly after MAAG Taiwan was formed.

If you ever wondered what went on, when, and where in Taiwan, you are in for a treat.

Preparing the layout of this presentation is enormous and difficult to present in a form which you can track not only the daily changes but follow changes at a particular base on the island as they occurred.

It will take me some time to fully complete, but I will release updates. The complete presentation will be posted on the Taipei Air Station web site.

I want to express my thanks to Mr. Terry Sherwood for his unselfish and gracious presentation of these documents to me.

Receiving these documents was similar to being chosen to receive a great treasure. When the binder arrived in my office and I opened the carton, my heart fluttered, my hands were weak. As I thumbed through these pages, and viewed the old photographs my heart was at peace and I realized our history in Taiwan was not lost, it was found and it would soon be presented on the Internet for history to record our accomplishments in helping the people of Taiwan.

God bless the country of Taiwan and its citizens. 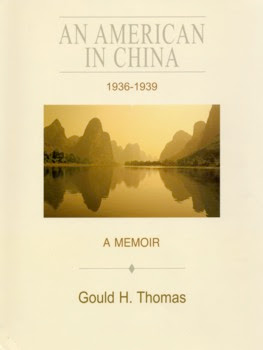 A friend, Luther Deese, who spent many years in Taiwan, sent this reading recommendation.

This book may be available at your public library. There appear to be a number of inexpensive copies available for sale at the Amazon link.

The book starts by recounting how young Gould had saved enough money for what he'd planned to be a trip around the world -- a heady trip for the times of 1936. His travels in China begin in Part III after Part I gets him from the East Coast of the USA, through the Panama Canal and to Japan. Part II, a recounting of his sojourn in Japan, is fairly brief and would probably be of more interest to you and folks who've spent time in Japan than it was to me -- I was anxious for him to get on to China where his adventures take up most of the book. He arrived in Beijing in September, 1936 intending to stay in China for several weeks but ended up staying for three years.

Gould finds employment as a traveling representative for Texaco, much like Jim Lilley's older brother Frank did for Standard Oil during the same time frame [see, "China Hands" by James Lilley with Jeffrey Lilley, ISBN: 1-58648-136-3]. They were essentially traveling kerosene merchants covering large expanses of China during a time when 'travel and communications were indeed inconvenient'.

Gould's writings, as compiled by his wife and others, describes in detail the situations he encountered throughout his travels and should be very interesting for you to compare and contrast with your past and upcoming China peregrinations. Actually, some of what Gould encountered in rural China of the late 1930s wasn't significantly different from some of the things I and my friends experienced in rural Taiwan as late as 1960. The progress in Taiwan since the decade of the 1970s is mind boggling, as is the progress in mainland China since the decade of the 1990s.

The Gould book includes numerous photos, most of which he personally took during his travels. The photos alone make the book a worthwhile possession and for us who have spent time in Asia and have traveled in China, it is especially interesting.

Posted by Taipei Air Station at 8:30 PM No comments: 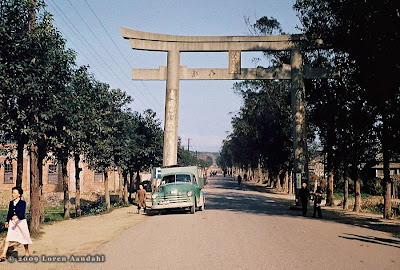 A Torii gate sits over a main road near Hsinchu, circa 1957.

Out Into the Rural Areas of Taiwan 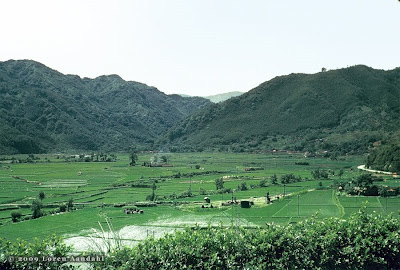 A beautiful valley near Chutung, east of Hsinchu, circa 1957
We leave Hsinchu today.
More beautiful pictures can be seen HERE. 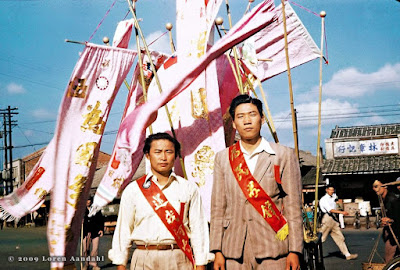 These two young men are draftees who are reporting for military service and are wearing banners proclaiming their impending service to the Republic of China.

In Taiwan all young men had to serve 2 years of compulsory military service after graduation from high school.

This scene, in 1955, was taken in front of the Hsinchu railway station.

Look HERE for more wonderful photographs from Hsinchu.
Posted by Taipei Air Station at 9:25 AM No comments:

Independence Day - The 4th of July 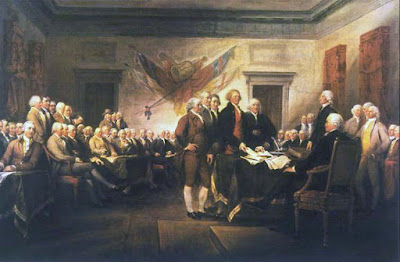 The Declaration of Independence

We hold these truths to be self-evident, that all men are created equal, that they are endowed by their Creator with certain unalienable Rights, that among these are Life, Liberty and the pursuit of Happiness.
Posted by Taipei Air Station at 10:00 PM No comments: