Friends from the Taichung area had invited us to have dinner with them in Taichung today.


We decided to pass on the dinner invitation and have lunch here in Taipei.

Earlier this week, I was searching through my computer for something on past Thanksgivings in Taiwan.


I came upon this old China News paper from 1952.  I hope you enjoy reading the local news from those days, its been 63 years since my friend, Alice Winans put this news article away for safe keeping.


Alice passed in 2011.  She shared a lot of information about her sojourn in the Taipei area during the early 1950s. 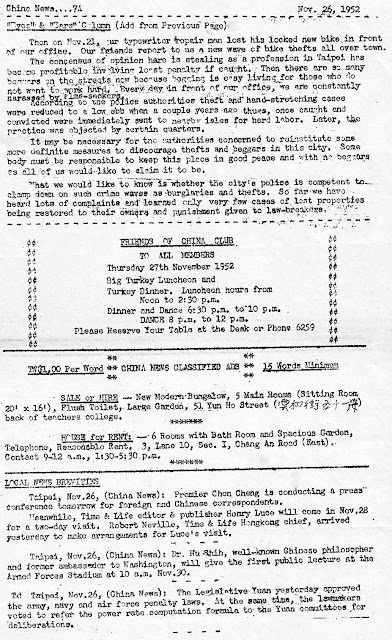 During the early 1950s, the most popular "non-US" facility  US personnel frequented was a club, described as being owned by Madam Chiang, called the Friend's of China Club, FOC. It was a membership club, I have never seen their rules and regulations, but suspect it was frequented by high ranking military and civilians, who worked in the surrounding area.


The FOC Club was a block or so from the HQ MAAG Building and the Union Building, these two building are gone, a grassy area is all that remains.
The FOC building is still standing, although no longer a club.
The page above has a number of interesting writings..
Please note the "Thanksgiving Ad" for the FOC Club.
What strikes me most is the "DANCE 8 p.m. to 12 p.m." line in the ad.
Dancing was still a "big deal" in those days.....
Moving on... it's Thanksgiving day, 26 November 2015...
We decided to have the Luncheon Buffet at the Grand Hyatt Hotel.
I didn't eat breakfast, just a couple of cups of coffee at this house.
We took a cab into the Taipei 101 area.  The Grand Hyatt is on the left side of Taipei 101 on the opposite end of the street.
I was expecting to find a giant Christmas Tree in the main lobby.
Nope.
Only saw some Christmas decorations hanging on the walls of the main lobby area.
We walked back toward the Café.  We've eaten here many times during the past 5 years. 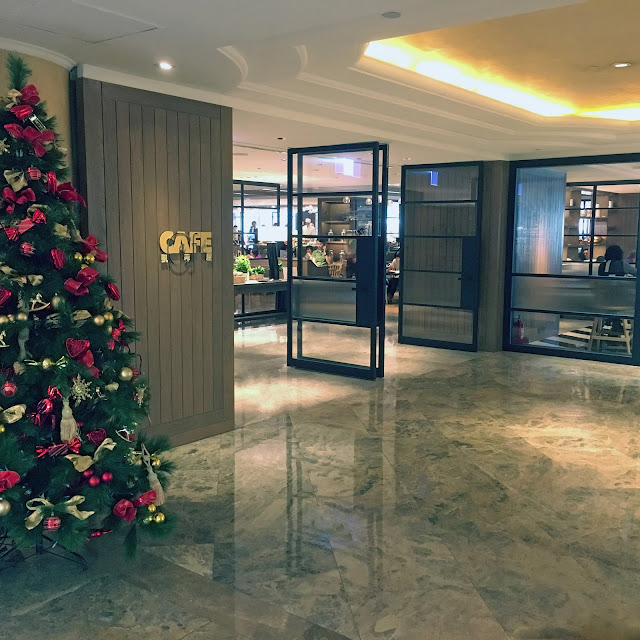 Entrance door at the Grand Hyatt "Café."
They had a small Christmas tree just outside the door, so all is not lost.
We hadn't visited the hotel for about a year.  Sometime during that time, this restaurant was remodeled.  They did a good job, very nice!
After being seated, I headed straight for the "Thanksgiving Turkey" cutting board. 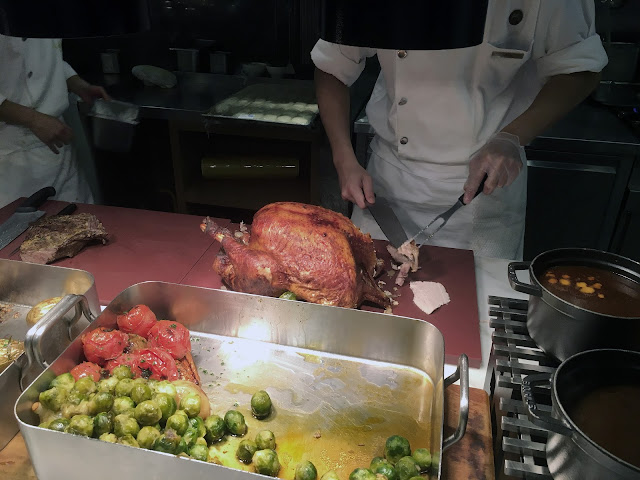 A chef was slicing and here is the turkey he placed on my plate.
Oh my, look at those huge baked tomatoes!  I love baked tomatoes......
I was so anxious to have the chef place one of those tomatoes on my plate that I overlooked those yummy looking Brussels Sprouts. 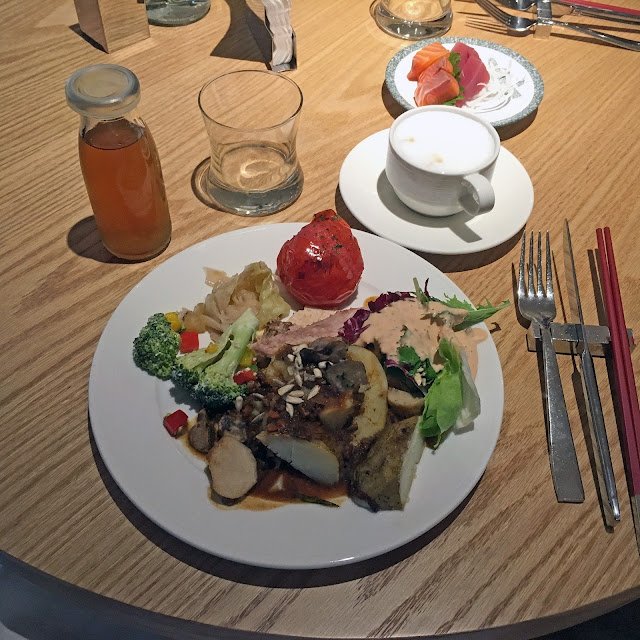 I enjoy mixing food together, it was very good.

After a few minutes, it was gone, and I headed out to the slicing table for something else. 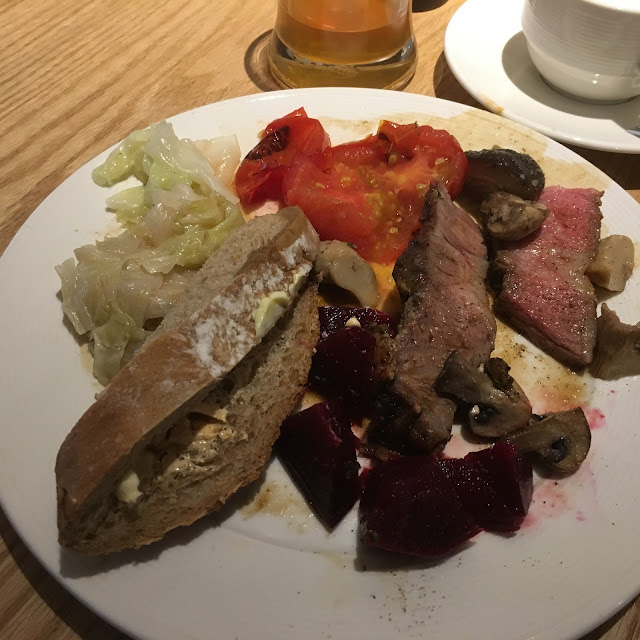 Second plate, sliced beef with mushroom sauce, 2 types of cabbage, another favorite, cooked beets, another baked tomato and a large, slice your own, rye bread with tomato butter...  It was good! 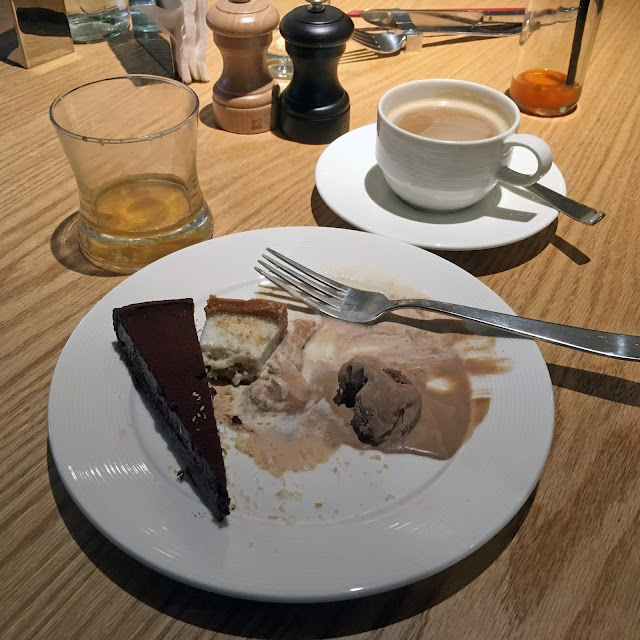 After finishing off my second dinner place, I couldn't pass up the dessert area.
I held it down to 3 or 4 items, very tasty they were!
End lunch with a cup of hot coffee.
Thanksgiving, yes.
I thank God for the blessing he has bestowed upon me and my family.
I hope your Thanksgiving is blessed and joyful with your family and friends.

I've been writing about the United States Military in Taiwan since October 2005.

Since those early days of posting stories and photographs, I've not had a hint of a Tainan "base map" of the US Air Force area that could be read.  The one map that we had, courtesy of Les Duffin, was too small to really see with much clarity

Rick Slater, administrator of the Tainan Air Base Facebook pages asked many who joined the Tainan Facebook,  if anyone had a copy of the old base map.
Rick was aware that large maps of the base existed and were posted on the walls of at least two law enforcement offices at Tainan.
Anyone having one of those old maps would have left Tainan 35 to 40 years ago.

Today, we have our “first” clear and clean map of the US Air Force area at Tainan AB.

The map clearly shows how every “nook and cranny” was utilized in the small footprint the US Air Force utilized at Tainan AB. I don’t believe they missed anything.

The area in 1972 was such a big change from the early 1950s, when MAAG first arrived and bamboo huts were constructed.

From the archives of the "USAF History in Taiwan" is this entry:

August 1956:  A construction project at Tainan AB consisting of Bamboo Huts for living quarters was started in June and completed in August.  Twenty additional huts were completed in December 1956. 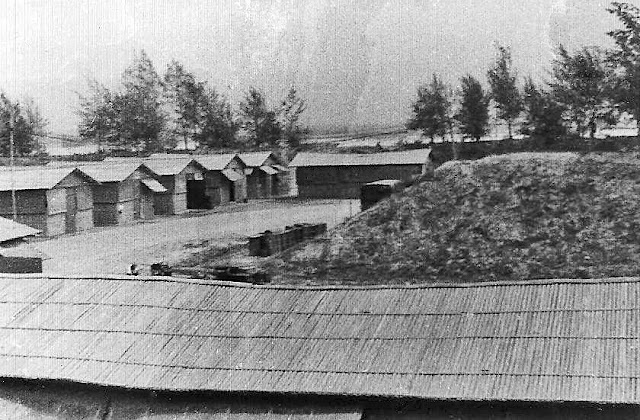 In the late 1950s, new construction began on Tainan and it grew to what is depicted on the 1972 map of the US Air Force area of Tainan Air Station.

Special thanks to James Taylor who scanned his yellowed and faded copy of the Tainan map, sent it on to Rick Slater,  the administrator of the Tainan Facebook pages.
James Taylor was the Law Enforcement Desk Sergeant at Tainan during his tour.

Also much thanks to Bruce Rayle for his help in cleaning, lightening and darkening areas of the map so that it was presentable to our readers.

Bruce spent some of his younger years at Hsinchu.  Bruce's father was an US Army Officer assigned to MAAG in Hsinchu. Here's a link to Bruce's Family's story.

In October 2013, a group of former military men and their spouses, including myself, were invited onto Tainan Air Base to renew our memories of the base.

We were blessed to arrive on a bright, sunny day, no showers to hinder our visit.

We were met by a group of Taiwan Air Force Pilots and military officers who would be our hosts and guides as we toured the base. 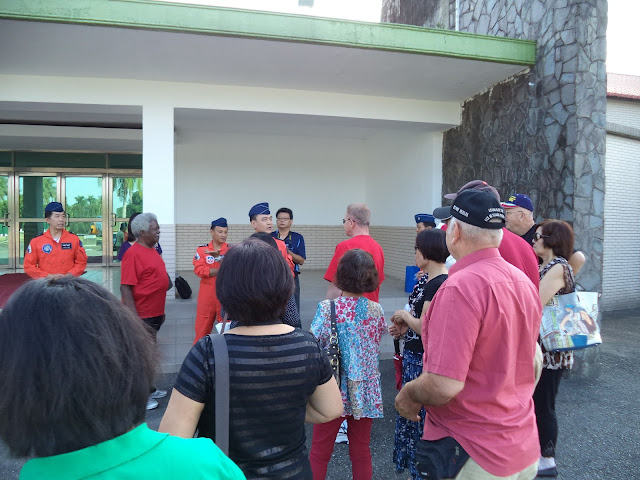 Our Taiwan Air Force hosts, welcoming us onto Tainan Air Base. 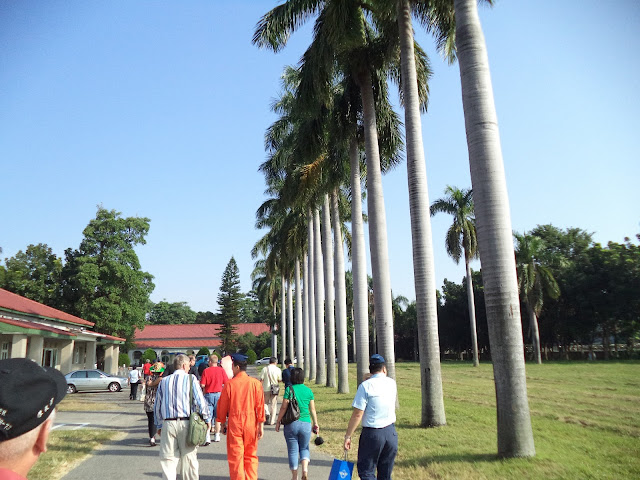 Walking toward the Tainan AB Museum. 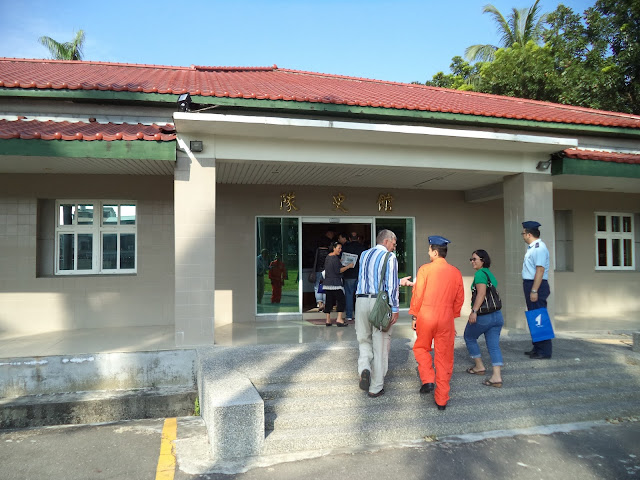 Up the steps into the building which housed the Museum. 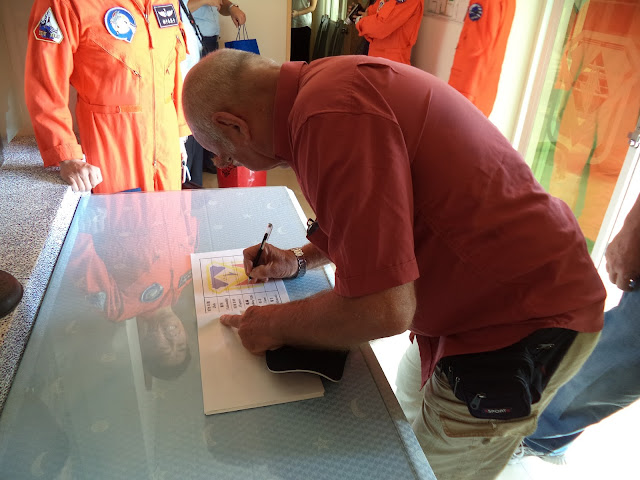 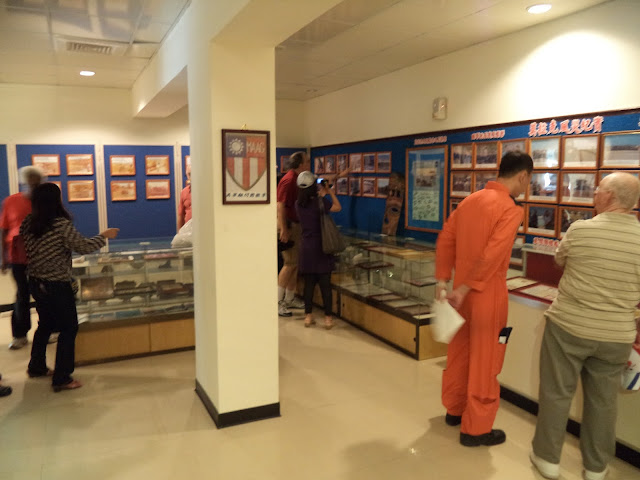 The display area is very large and has many photographs showing US personnel and equipment. 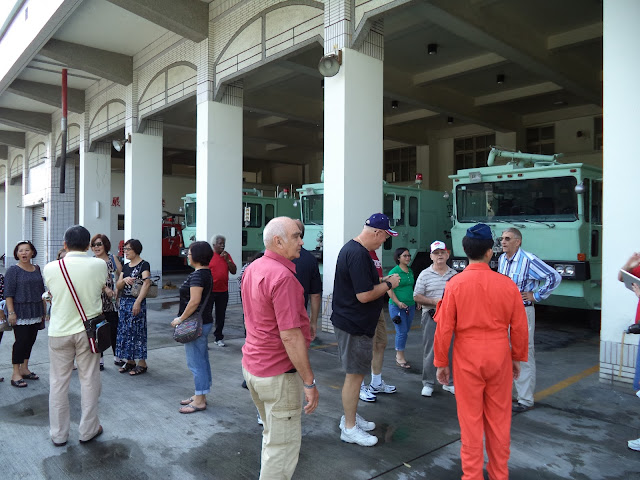 We moved onto our bus and proceeded to the Fire Station to begin our tour.
One of the men in our group had worked at the Tainan US Air Force Fire Station during his tour at Tainan.

Our first stop in the old US Air Force area was along Bolling Street. 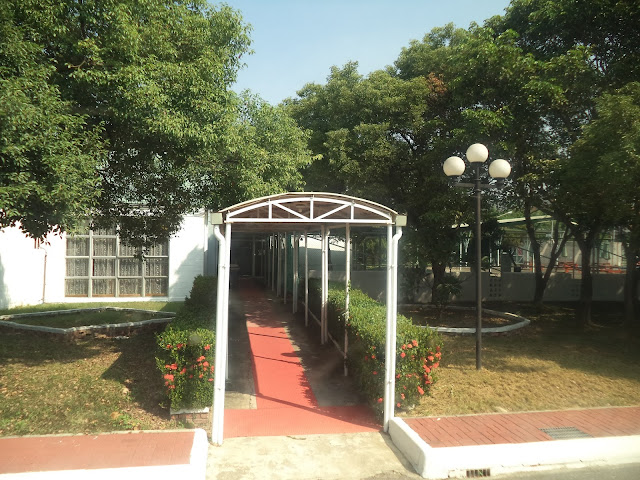 This was one of the buildings that was still being used along Bolling Street.
I believe this leads to the swimming pool. 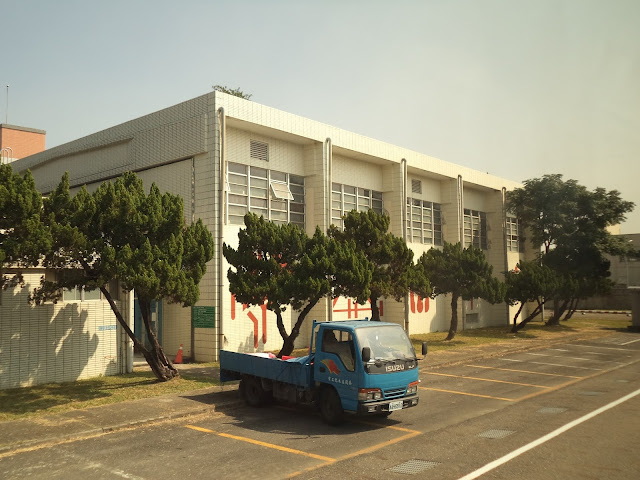 At the east end of Bolling street,  the Gym, with what looks like Aborigine markings. 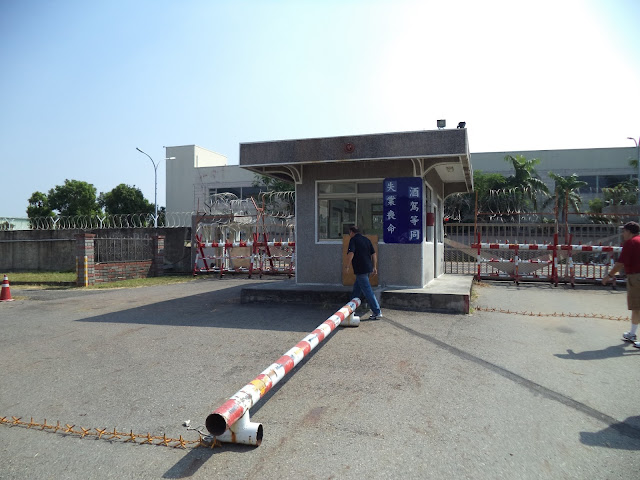 Here's an old gate just next to the Gym.

There has been some talk about the gates at Tainan.  I'm not sure if this gate was in use during our sojourn at Tainan, perhaps someone can explain if this was an active gate during your assignment at Tainan. 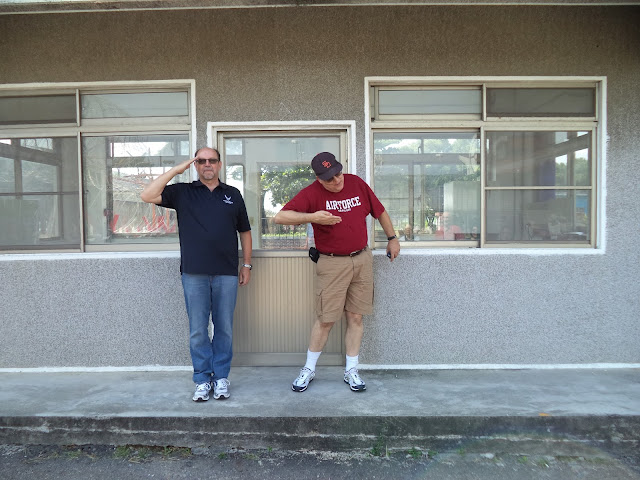 Two of our group were encouraged to display their best military bearing, "waving em in." 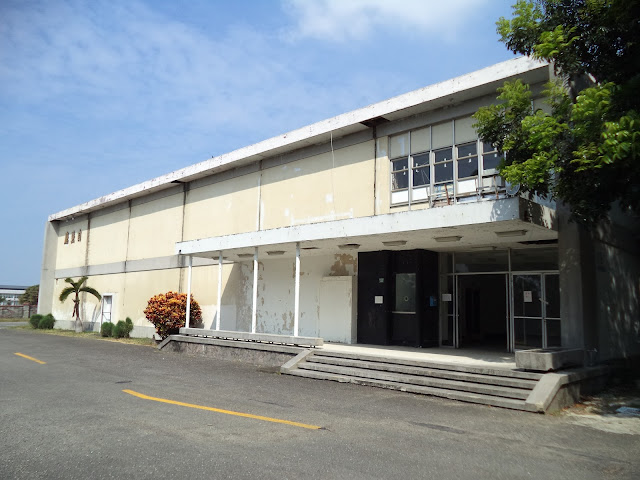 The Theater, the roof is about ready to fall-in. 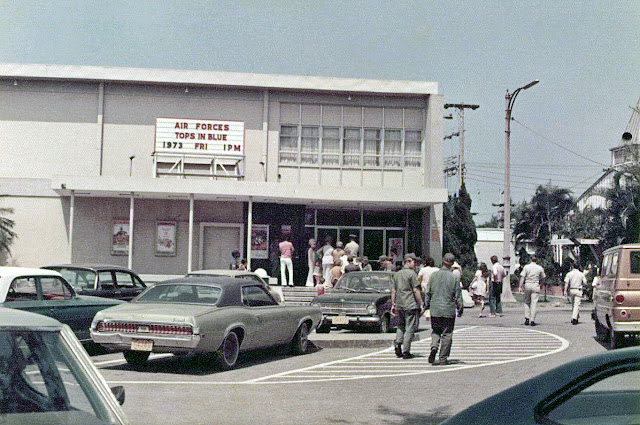 Going about business in 1973.
Back-in-the-day, the Theater was a "Favorite" in many of our lives.
Photo courtesy of Roger Trzebiatowski 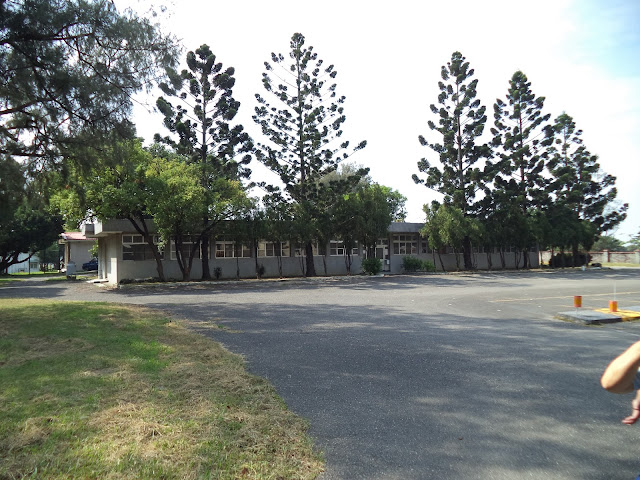 The Rendezvous...  Looks like it had a face-lift.
What was your favorite dish from the Rendezvous kitchen? 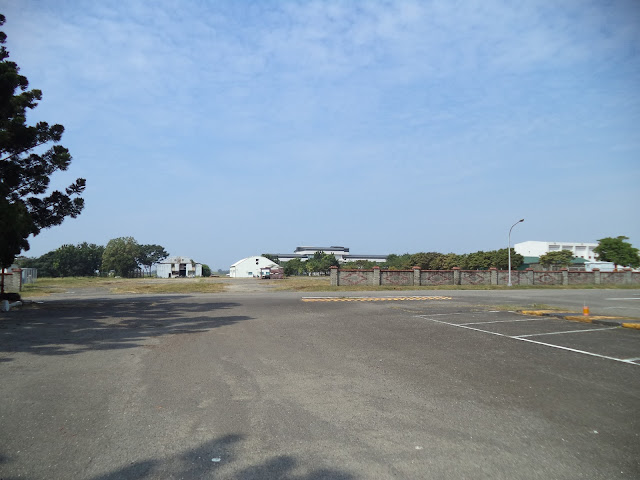 Across Fourth Street from the Theater/ Rendezvous parking lot, the empty area where the Motor Pool once stood.

Those two warehouses in the distance, are they buildings 213 and 214, seen on the map below. 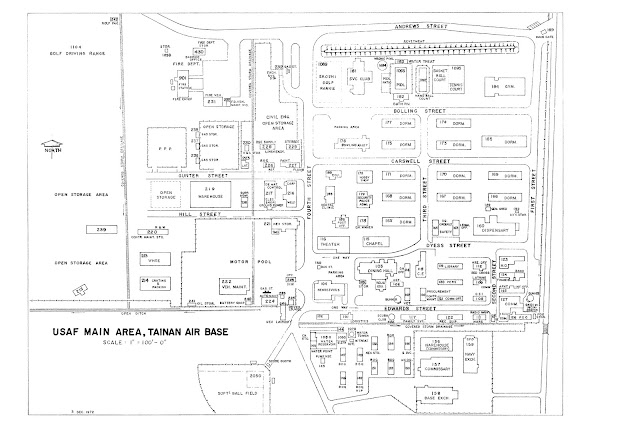 This map is very large, so keep clicking on the map until it enlarges....
Please leave your Comments below.