MAAG Taiwan  Lt. Cols. Frank Lynn and Alfred Medendorp were among the dead that day.

The shelling grew heavier; during the campaign, an average of 10,000 Red rounds were fired daily.

Part of a article from "The Cold War in Asia" by Michael Haydock, from the VFW Magazine.

This week, the Kinmen Defense Command unveiled a monument recognizing LTC Frank Lynn who perished on September 3, 1954,  while under shelling attack from China.


Way back in 1992, the other MAAG officer killed on 3 September 1954,  LTC Alfred Medendorp was honored:

In 1992, a plaque was unveiled in honor of LTC Alfred Medendorp. The Medenhorp family was transported to the very spot where LTC Medendorp was killed.  There, they witnessed the dedication of a monument erected in his honor. 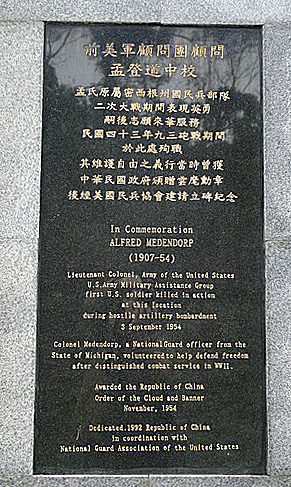 US military Lt. Col. Alfred Medendorp, a former member of the U. S. Army Military Assistance Group was killed in combat at the Kinmen Shuitou Wharf during the Artillery Bombardment of September 3rd (September 1954). He died in action under the fire of the Communist China’s artillery. He was 47 years old (1907-1954).

In the fall of 1954, on the eve of the Southeast Asia Convention, Communist China attempt to exert pressure over the nations attending the convention to influence the agenda of the convention. Driven by a desire to pound the Kinmen area in a surprise offensive, China bombarded a navy vessel docked at Shuitou Wharf to strengthen its international clout, thus bringing to reality its political blackmail scheme. Since Communist China dared not launch a direct offensive, it resorted to the violent bombardment of Kinmen.

September 3, 3:00 p.m. Communist Chinese artillery began pounding the islands of Kinmen (Greater Quemoy and Lesser Quemoy), and sending surprise attacks on Shuitou Wharf. Kinmen Defense Commander Gen. Liu Yu-Chang immediately ordered the artillery troops to launch counter strikes to suppress the Chinese attacks. Communist China pounded Kinmen for two straight hours that day, and continued to launch fragment cannon attacks until 8 in the evening. None of the villages along the coasts of the Kinmen Islands had been spared. The military accounted over 5,000 rounds had been fired to Kinmen. The offensive was a prologue of the cross-strait artillery battles between Communist China and Taiwan.

(Artillery Bombardment of September 3rd) In the fifteen-day period that followed September 3rd, Communist Chinese fired 8,767 cannon rounds towards the Kinmen area. The attacks damaged the Shuitou Wharf and several civilian housings, as well as killed over 10 military personnel; Lt. Col. Alfred Medendorp of the United States Military was among those killed in action. The heroic fighting spirit of the front defense line awed the Communist Chinese troops and earned the respect and admiration of the ROC and foreign nationals.

In memory of the unselfish and heroic sacrifice of Lt. Col. Medendorp, the R.O.C. Government issued a “Cloud and Banner Medal” of honor award to him. In 1992, upon the request of the National Guard Association of the United States, the government erected a monument at the spot where Lt. Col. Medendorp was killed. The monument was designed and constructed under the supervision of the contemporary Lieh-Yu Division Commander - Army Major General Kao Hua-Chu and the incumbent Chairman of the Veterans Affairs Commission. Following the completion of the stone, the Chief of the General Staff, General First Class Liu Ho-Chien inscribed the memorial epitaph. The stone (Lt. Col. Alfred Medendorp monument) was erected on August 7, 1992.

Colonel Medendorp, a National Guard officer from the
State of Michigan, volunteered to help defend freedom
After distinguished combat service in WWII.

Awarded the Republic of China
Order of the Cloud and Banner
November, 1954

Dedicated. 1992 Republic of China
in coordination with
National Guard Association of the United States


I am not aware of the reasoning behind why both soldiers were not honored together in 1992.

According to the New York Times newspaper, " Friday's [Sept. 3] Communist shelling of Quemoy where two U.S. Army officers were killed when the shelter in which they took refuge was hit."

I would suggest one was a combat arms officer and one was a physician.

Could it have been one of those turf things?

No matter, they both were honored, which is an honor in itself.

I received an e-mail this morning from Bruce Swander:

"I’m a Vietnam researcher working a project – and by coincidence you did an article about 2 Officers killed at the station back in 1954 that intertwined with my project.  Thought you might find this interesting.
In July 1954, a group of Viet Cong attacked a MAAG Advisory team just outside of Saigon – killing two and wounding a third American.  The incident is historical in that these two soldiers were the first US casualties of the war.  While documenting this incident, I noticed that the Army had coded the death of one of them – Major Dale Buis – as ‘Accidental’….most likely to keep the attack out of the press at the time.  That coding would have prevented him from being awarded a posthumous Purple Heart.
However – after further research – I found that in 1954 DoD had no authorization to award a PH to anyone worldwide, regardless of the situation.  It wasn’t until April/1962 that Pres Kennedy signed Executive Order 11016 – allowing the medal to be awarded retroactively.
Within days, the Army issued General Order #24 (attached) – issuing the 3 soldiers in the incident…along with 2 from Kinman Island.  Ironically, I had started to look into this in mid-Dec/2011 – and when I did a search on your 2 to see what was going on – it quickly brought me to your article.  Quite fortuitous."

Below, the General Order awarding the Purple Heart to both officers.  Their names are in Section II. which contains the names of individuals awarded the metal posthumously.

Click on the General Orders below, they will open in a larger size for easy reading. 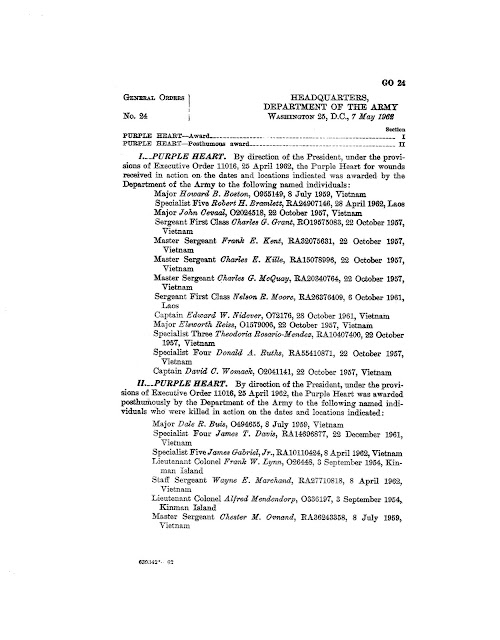 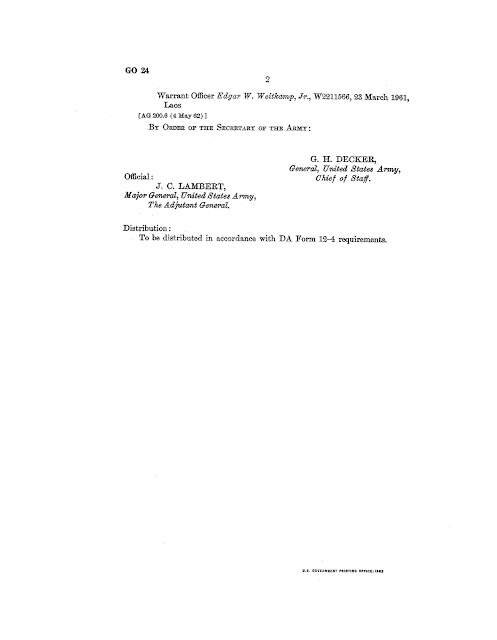 UPDATE - 22 March 2014
I received note from David Medendorp, son of LTC Medendorp, who was killed during a Chinese Shelling of Quemoy on September 3, 1954, while on-duty with US MAAG Taiwan.

David included two photographs of the 1992 ceremony dedicating a monument located at the site where LTC Medendorp and LTC Flynn were killed 1954. 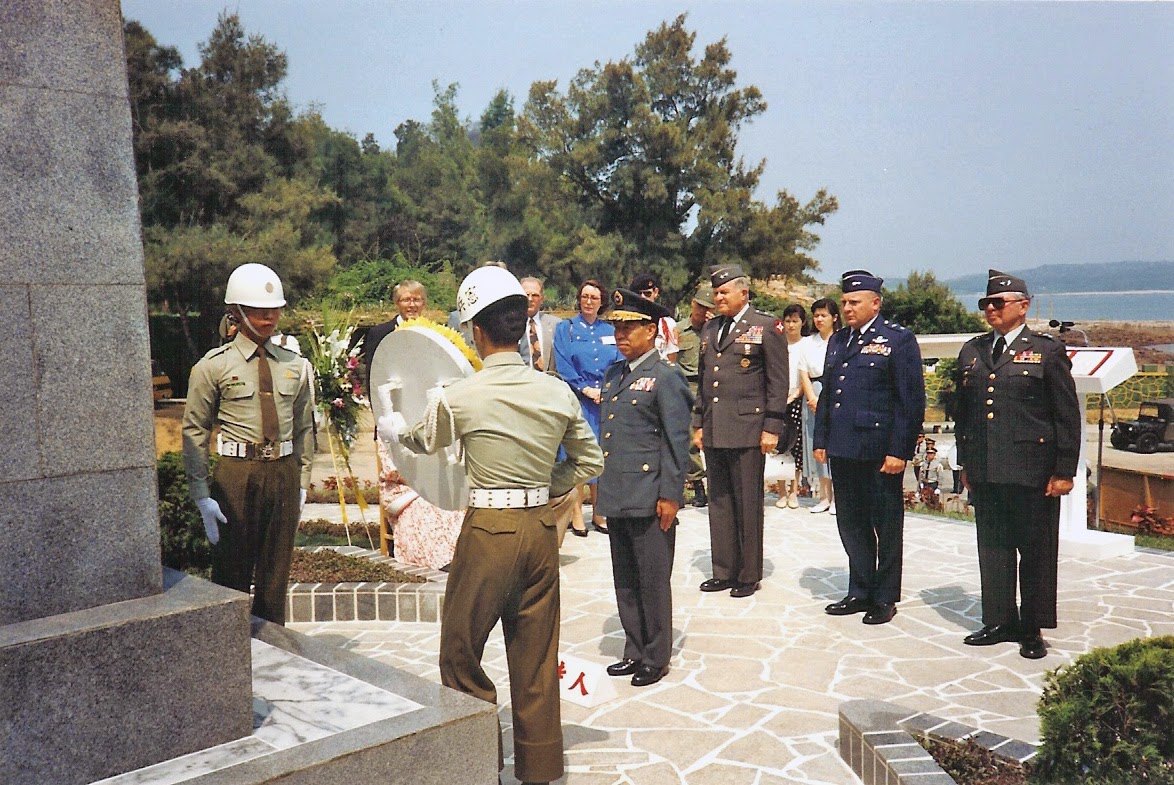 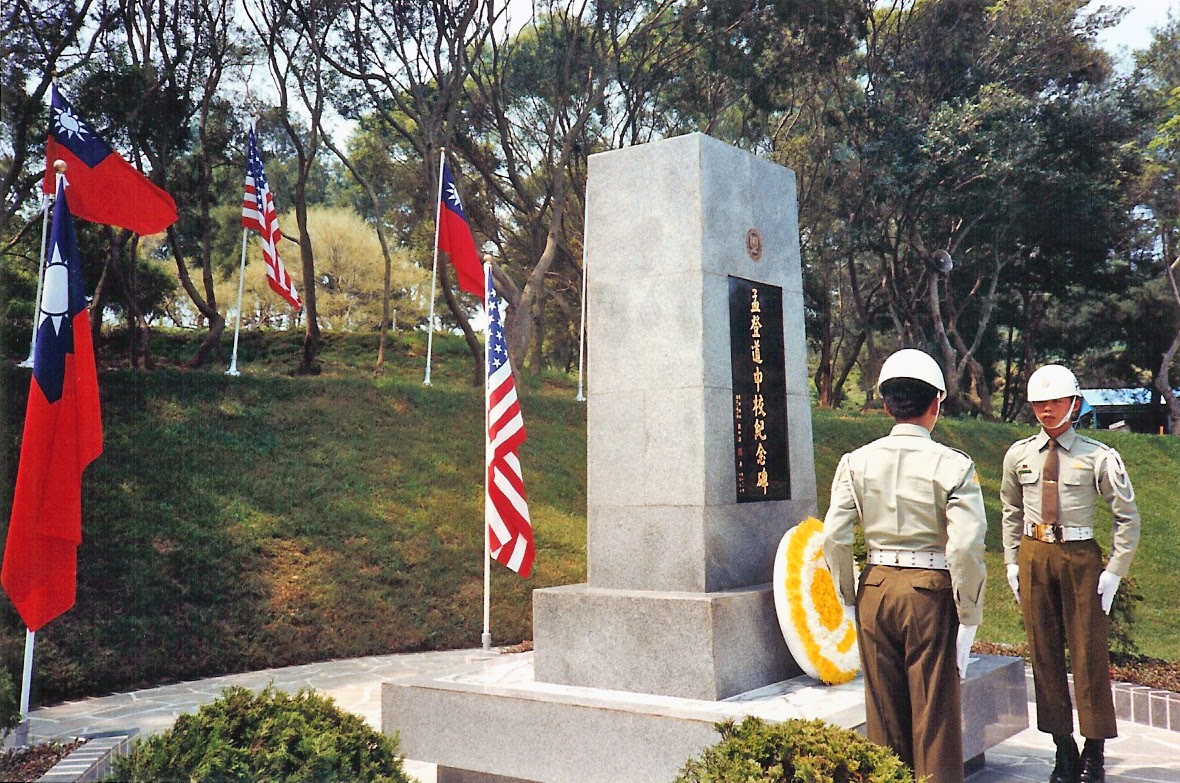 Thank you to David Medendorp for sharing these photographs.

David added this note in his mail:

"An interesting event that occurred in the spring of 1962 while I was serving there.

President Chiang Kai-shek began to mobilize his military forces for one last effort before his death, to retake the mainland.

Between his military leaders and the American command, his invasion plans were never allowed to take place.

However, for about three months all his military, including all American forces on the island, were in full readiness for an attack.

We can only speculate on what the outcome would have been had he been allowed to proceed."

You may want to view previous posts of Jack's Photographs,  HERE and  HERE 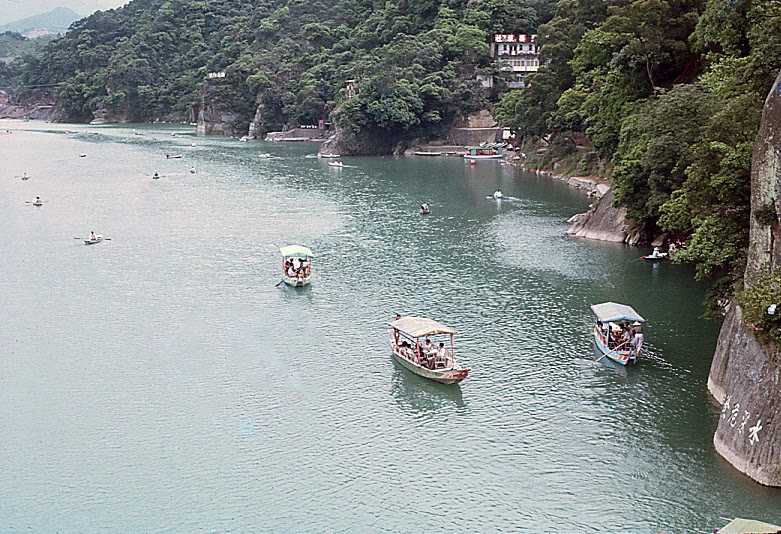 The Chinese characters on the wall announce deep water area. 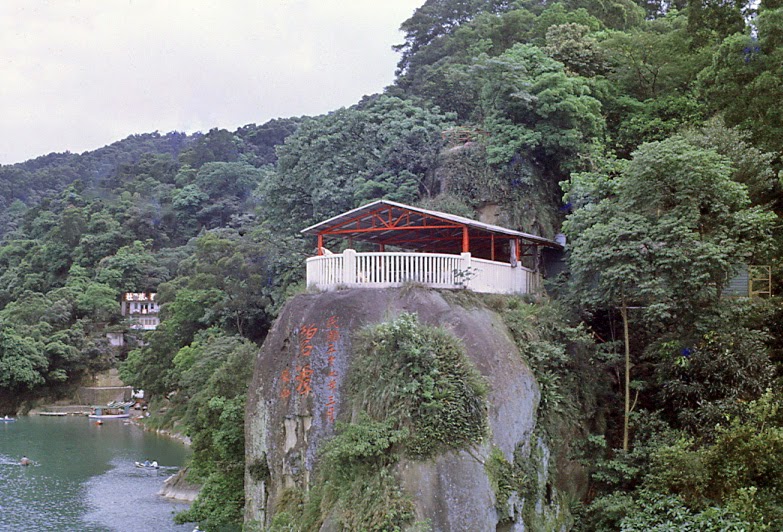 This large stone outcropping is the top of the stone that warns of deep water. 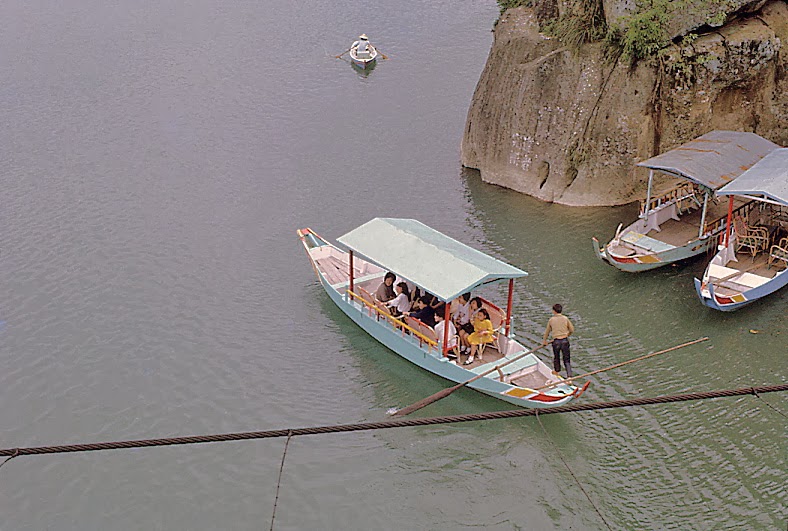 A family out for a day of fun on Green Lake. 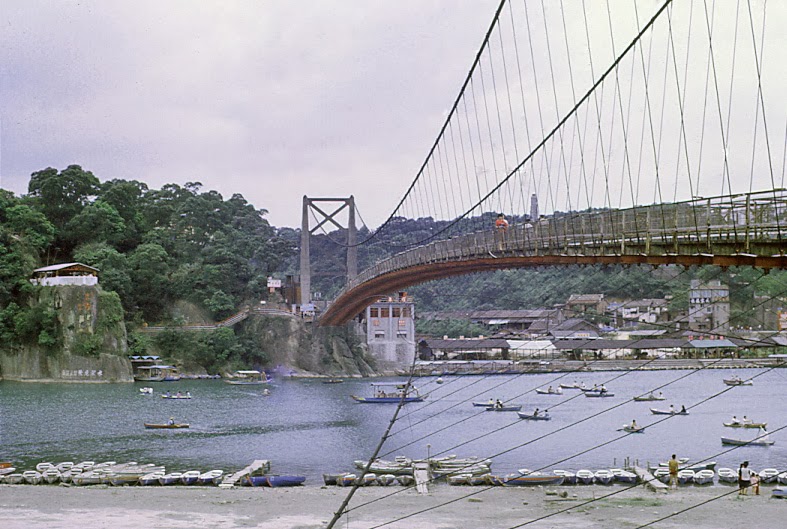 The photos above were all taken from this bridge. 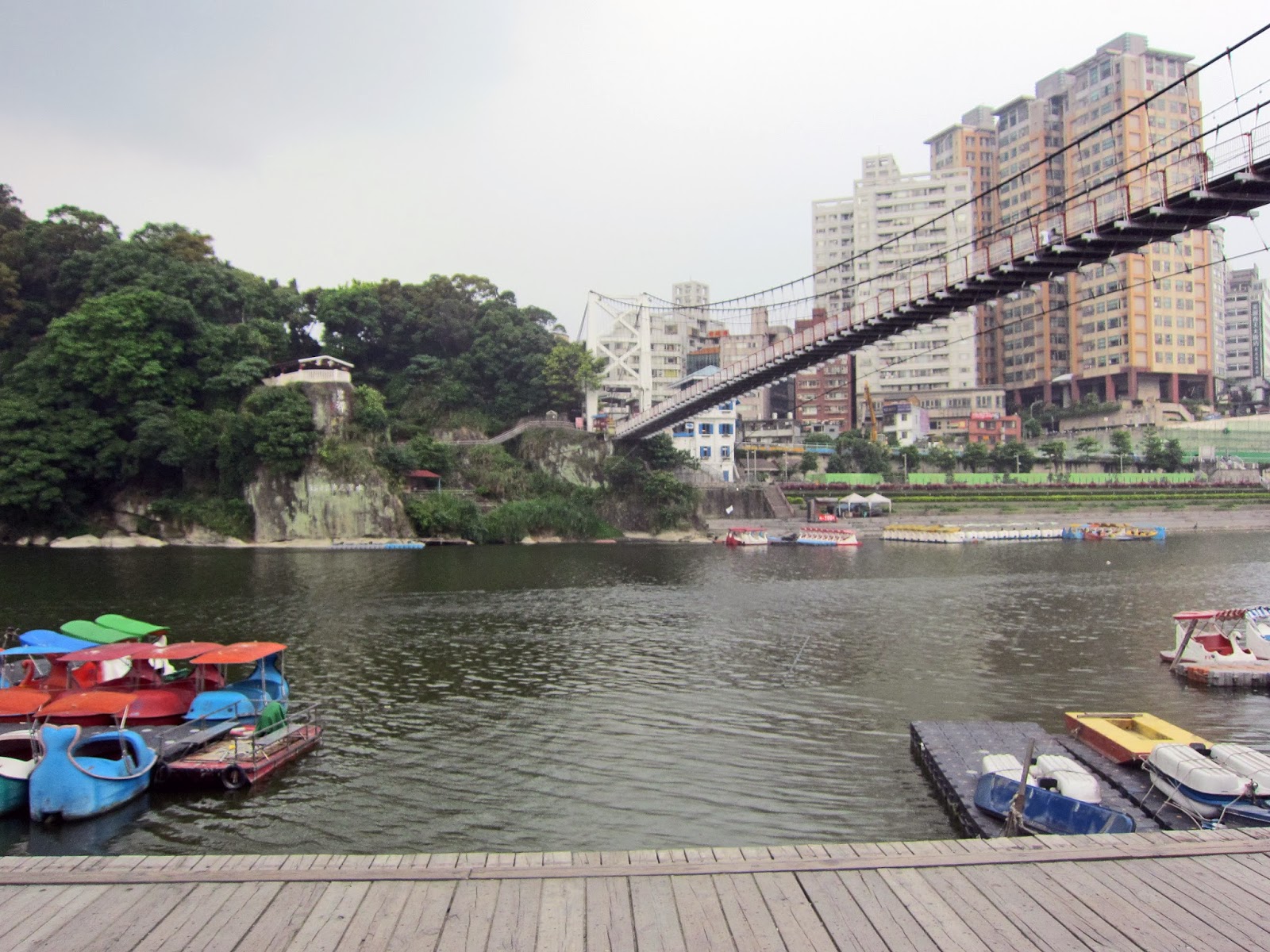 This photo was taken in May 2011.
Refurbished and updated, the bridge is still in use today.

Move back and forth between the 2 photos above.  Lots of changes in 45 years!

A few minutes after I took this photo, I biked to the left up the river, where I got caught in a summer thunder and lightning gully washer storm.  The only cover I could find was under a large tree where a group of retired school teachers were also standing.  We waited out the storm and were all soaking wet because of the wind driven rain, our umbrellas were useless that afternoon.  The storm went on for what seemed to be an hour before before the heavy rain slowed.  I jumped on my bicycle and headed for my apartment which was a few miles away.  My visit to Green Lake that afternoon was a day to remember 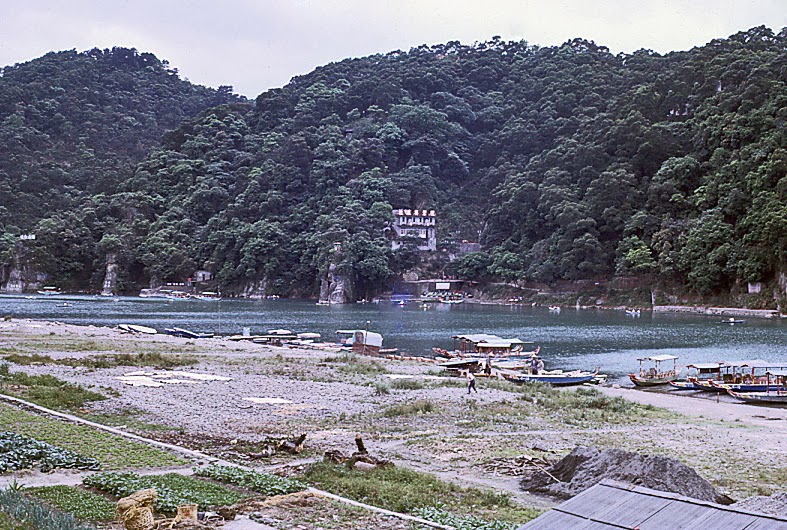 Another photo taken from the bridge, looking upriver in the 1960s.


Let's cross the street (Chung Shan North Road) and walk into the compound.

Remember how the Taiwan Military Police would just wave you inside the gate.
I saw some remarks from an American civilian not employed by the US in any capicity, saying he would sneak into the West Compound and have a nice meal at the Navy Cafeteria (building 400) once or twice a month, He missed his American food.   He was never asked for an ID, always walked in along-side some American.

He'll probably climb-up right over the Taiwan Government Military Hostel, (the gray building) seen in the left of this photo.  Many US Military stayed in this hostel one time or another during their tours.