We are launching a series of posts on the United States Air Force in Taiwan.

The US Air Force had the largest number of members assigned on the island and their responsibilities no doubt were some of  the most varied.

These posts will record, by approximate date, significant events as they occurred in the US Air Force area of responsibility on Taiwan from the beginning in 1950 through 1969.  Mr. Terry Sherwood,  the Public Affairs/History Officer at Taipei Air Station produced this document before he returned to the US in 1970. I have taken the liberty of adding a few photos, minor clarification of some sentences and have added external links to his work.

All U.S. Military personnel were intertwined throughout the island, each interacted with others to form a combined operation to protect Taiwan.  Most of the events documented pertain to the US Air Force Headquarters at Taipei Air Station and it’s subordinate units throughout Taiwan.

US Military advisors had first arrived in Taiwan with the Chinese forces from the mainland.

27 June.           US President Truman ordered the US Seventh Fleet to prevent a Communist attack on   Taiwan and asked the Government of the Republic of China (GRC) to cease air and sea operations against the Chinese mainland.

Wouldn't it be interesting to know what these men discussed?
MacArthur was some General.

January to June.
The Foreign Affairs Service Department (FASD) was established as the GRC agency to administer support to the Military Assistance Advisory Group (MAAG) only.  During this time, MAAG was the only US Military unit on Taiwan.

30 January and 9 February.
An interchange of notes between the GRC and the US,  known as “The Military Assistance Agreement” in which the GRC agreed to furnish adequate facilities required for, and to grant diplomatic privileges to personnel of the US involved in US observation of progress and control of military assistance furnished by the United States Government (USG) to GRC. (MAAG) (TIAS 2293

1 May.             US Major General William C. Chase arrived in Taipei as the first Chief of the Military Assistance Advisory Group (MAAG) in Taiwan.

29 December 1951 and 2 January 1952.
Agreement between USG and GRC confirmed the understanding of the two governments on effective utilization of economic and military aid provided by the USG.  (MAAG) (TIAS 2604)

23 October and 1 November.
Diplomatic notes, commonly referred to as the “MAAG Agreement,” the GRC granted specific privileges, exemptions, immunities and “free” services both to MAAG as an activity and to the members of MAAG as individuals. (MAAG) (2712)

Karl L. Rankin became the American Ambassador to the Republic of China.

23 September. Chou En-lai, Communist China’s Premier stated: “It is imperative to liberate Taiwan and liquidate the traitorous Chiang Kai-shek group.”  The communists then raided the island of Kinmen (Quemoy) with a small force.

30 September. The US Seventy Fleet made a show of military strength in the Taiwan Straits.

2 December.   A Mutual Defense Treaty was signed in Washington DC between the Republic of China and the United States.  In Article VII. of the Mutual Defense Treaty between the ROC and US, the GRC grants the US the right to station US military forces in and about Taiwan and Penghus’ as are mutually agreed to be required for the defense off that real estate.  This agreement includes no provision for the GRC to furnish logistical support to these units or to individuals of these units.

10 December  Notes were exchanged between the USG and GRC on Taiwan Defense.

26 January.     The US House of Representatives approved a resolution authorizing President Eisenhower to employ American Armed Forces to defend Taiwan, the Pescadores and “related positions and territories.”

27 January.     The 44th FS was deployed from Clark AB to Taoyuan AB per Fifth AF OPLAN 5A-55.  MOTHER HUBBARD Exercise.  67th FBS F-86th aircraft went to Chiayi AB and 12th FBS went to Tainan AB, these units were from Okinawa.


29 January.     President Eisenhower signed the Taiwan Defense Resolution, passed by the US Congress.

2 – 14 February.
Interchange of notes between the GRC and the US in which the GRC extended the “MAAG Agreement” (see 1 November 1952) to all members of the non-MAAG US Armed Forces on duty on Taiwan and the Penghus’.

7 February.     Ikiangshan, northernmost island of the Tachen group, was attacked by the Chinese Communists and fell.  The US Seventh Fleet helped evacuate some 38,000 civilian and military personnel from these islands to Taiwan.

3 March.         GRC and US exchanged instruments of ratification of the Sino

11 March.       In order to implement the Mutual Defense Treaty between the US and GRC (United States-Republic of China) on 2 December 1954, a conference was held on 11 March 1955 aboard the USS Rochester.  As a result of this conference and later conferences, the Formosa Liaison Center (FLC) was revived and reorganized as the U.S. Formosa Command on 25 April 1955 under the command of Vice Admiral A.M. Pride, US Navy. Brigadier General Harold W. Grant was relieved of his duties as Deputy Commander, Fifth Air Force and Commander, Air Task Force Five (P) and was appointed Deputy Commander.  The title Formosa Liaison Center remained in use until 1 November 1955 when the command became know as the US Taiwan Defense Command (USTDC).

13 March.       US Secretary of State, John Foster Dulles said, “If a Communist attack against Kinmen and Matsu were deemed part of an attack against Taiwan, the United States would move, under the Sino-American Mutual Defense Treaty, to protect the island and would no longer have reason to restrain the Republic of China from retaliating.”

8 May.             Due to a revised Command set-up in Taiwan which CINPAC undertook, Far East Air Force, in message VC 4935 recommended that Thirteenth Air Force assume control of Formosa (Taiwan) from Fifth Air Force.

12 May.           Brigadier General Benjamin O. Davis, in an interview with a historical writer stated that up this date the Air Force had not contemplated the establishment of an Air Force unit on Taiwan… However, within three months Air Task Force Thirteen (Provisional) had been established.

28 May            Thirteenth Air Force Representatives were given a summary of the situation on Taiwan by USTDC prior to them assuming responsibilities for its Air Defense.

June                 Governor C.E. Yen of the Taiwan Provincial Government granted General Wang the authority to use approximately six acres of land near the Joint Operations Center (JOC) to be used for Headquarters Air Task Force Thirteen (Provisional). (Editors Note:  This was the property on which Taipei Air Station sat.)

June                 First enlisted men assigned to Air Task Force Thirteen (P) were housed in one of three small building provided by the Chinese Foreign Affairs Service Division.  Due to overcrowding, double-decker beds had to be used.   Most men came from a colder climate with winter uniforms and no facilities were available to get summer outfits.  Temperatures in Taipei were 90 to 95 degrees and spending a sweltering night in a double-decker bed did not add to the comfort of their existence. 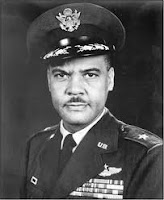 To read more about General Davis and his assignment at Taipei Air Station go HERE.

Please take a minute to write to me if you have information I have not included during this time period or you find a mistake.  I am most happy to receive your e-mail.  Quick link to me  HERE

Posted by Taipei Air Station at 12:39 AM