As we begin, I want to acknowledge and thank, Scott Clark, the Grandson of a man who served in Taiwan in the early-mid 1950s, whose photographs are being presented today to remember and look back at one of the early year's  Double Ten Celebration Parades in Taipei.

I hope you find the photos interesting. Take time, look closely at the photos.

These photographs were taken during the Double 10 Parade, in one of these years: 1953 -> 1956.  No date markings on original photo slides to identify the exact year,  perhaps someone will recognize the year.

There were thousands of men in this parade; many Republic of China Military units, "Passed in Review" before President Chiang Kai-shek (1887-1995).

You can look at this Celebration event as a display of Taiwan's Military strength..

If you've visited or walked by the Presidential Office Building in Taipei, you will probably recognize where the photographer of the Parade photos was sitting and standing when he took his photos.

Over the years beginning in the 1950s, the frontal area of the building has been remodeled and changed from what it was during this parade period.

Our photographer was seated in a VIP area, on the south end of the Reviewing Stand.  Only individuals with seating invitations could sit in President Chiang's reviewing area.

On the right side in most of the Parade photos, you will notice the (Armed Forces Stadium 三軍球場)  A very large building in itself. 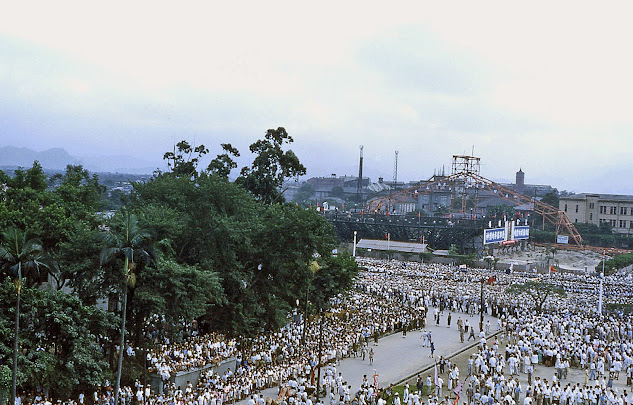 Armed Forces Stadium, under construction, 1951-1952.  Courtesy Alice Winans.  There are a number of stories featuring Alice Winans photographs in this blog. Search for Alice Winans using search box on right side of this blog.

People are standing all over the upper reaches of the stadium, attempting to get a good view of the parade, lots of cameras..  The Stadium was removed in 1960.  I'm wondering if the road running from the Presidential Palace to the East Gate was being widened?  You will see the East Gate in some of the Parade Photos below.

During these early years, (beginning officially in 1951) MAAG moved quickly and began full operation all over Taiwan and, a few off-shore islands, helping train President Chiang's Military in the use of US Military weapons and equipment.

In the book, "All My Love, Moe, Letters from Formosa", the author's husband, a US Army Officer writes about arriving in Taipei on a flight from Tokyo on 12 May 1951, to begin establishment of US MAAG Operations following General Chase's arrival on 1 May 1951.

The US MAAG Headquarters Building was just North West of the reviewing stand, seem below. 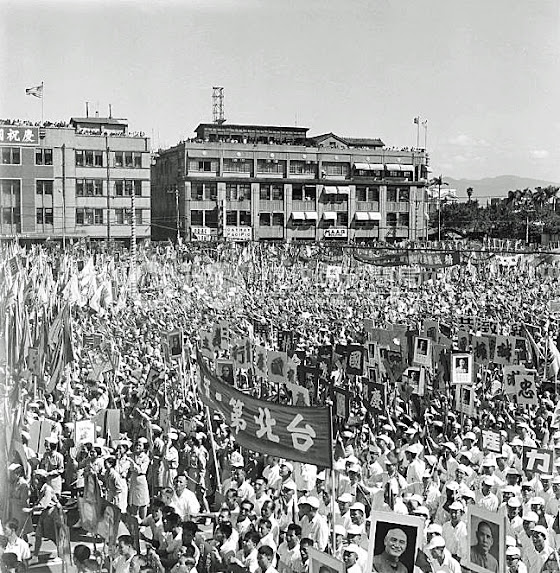 The MAAG Building in this photo, taken during Double 10 parade in 1965. Notice MAAG Signage just above head level, on the building straight across the crowd.

As you review the color photos of the this parade, look to the upper left side of a couple of the Parade photos, and you will see President Chiang standing in his Reviewing area.  You'll have to look closely to find him, he blends into the surroundings and cannot be seen in every photo, as camera angels change.

Strike up the Band, let's get this 1950's, Double 10 Day Parade moving down street. The soldiers are tired of standing around, they are lined up waiting down the left side of the street.  If you've ever marched in one of these "Pass in Review Parades" anywhere, you will understand how long you stand out there, in the sun, before you finally move out.... Exhausting for sure! 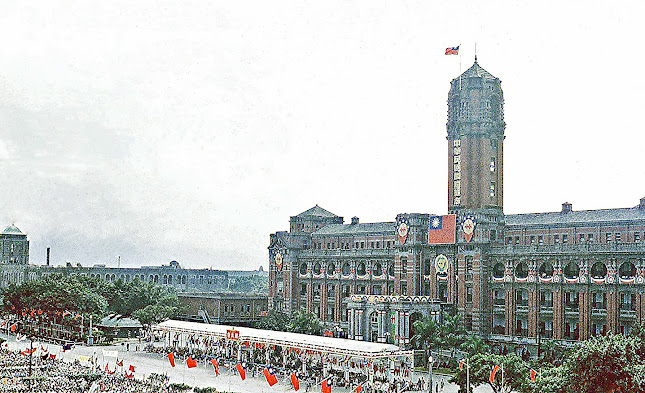 This appears to be another old Double 10 Photo. No date or ID. Some of the people on the lower left side appear to be standing on the road leading eastward to the East Gate.  Last time I looked around the area, a few years ago, a couple of days before the actual Ceremony, there were quite a few seats on the road leading back to the East Gate, in some of that street area in the photo below. Dates of photos vary! 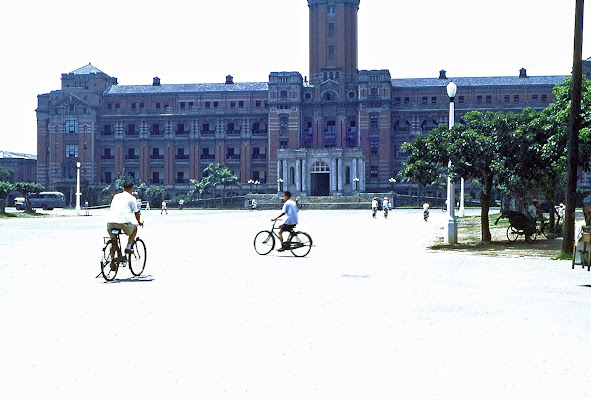 Above, looking at Presidential Office Building, circa 1951-52. Courtesy Alice Winans.
If you could turn right -> and look off a hundred yards of so, you would the the MAAG             Headquarters building, only half of the building in this photo, but you get  and idea of how the area looked in the early 1950s, just below. 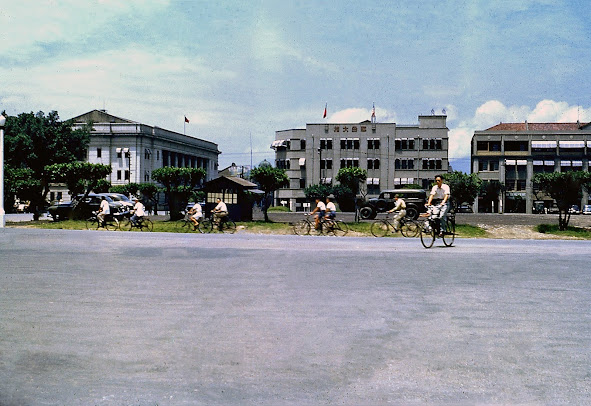 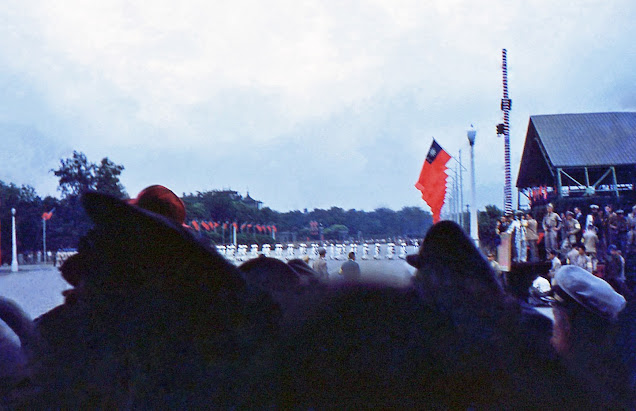 Best photo of the Opening of the Parade.
One the right side, the Gymnasium under construction.
Camera looking toward the East Gate (cannot be seen in this photo) 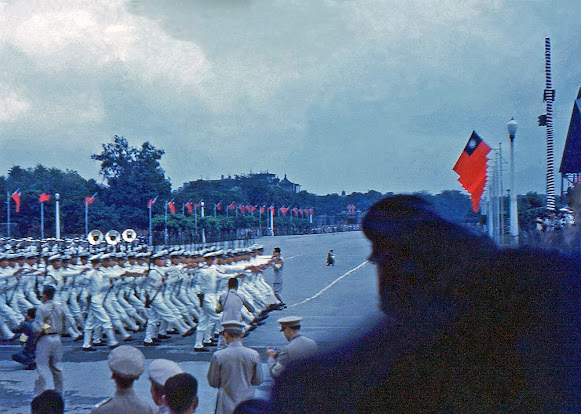 White uniforms, Taiwan Navy personnel.
Notice the Band standing behind the parade units.
Which instrument makes the deepest sound?
The sousaphone..  The band has 3 silver instruments delivering those very deep loud sounds to help the marchers know when their left heel should be striking the ground..  Hummm.... 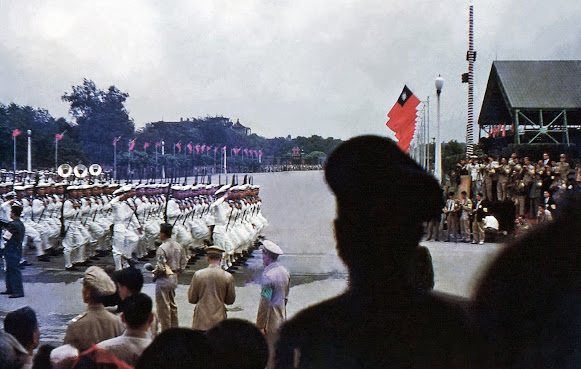 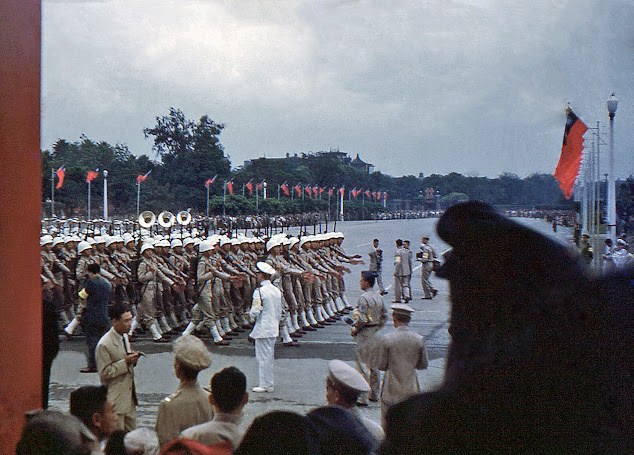 Taiwan Army Soldiers, wearing White Helmets, march past..
Notice the US Air Force Master Sergeant standing, just in front, believe he is holding a microphone, the whole ceremony is being filmed from probably on the Gymnasium on the right side of this photo. 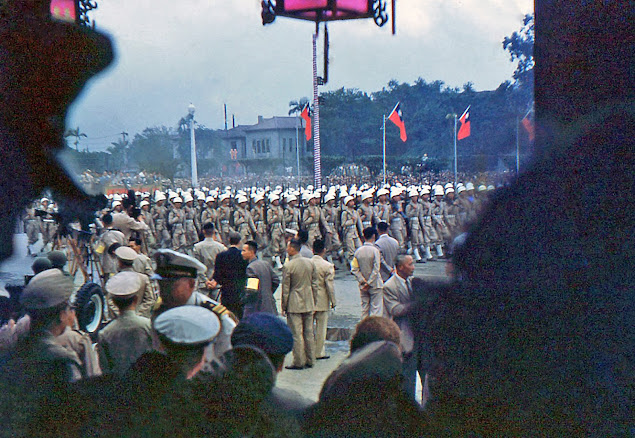 More Army Passing in Review.
Look on the left side of this photo, I see 2 or 3 Motion Picture Camera stands. 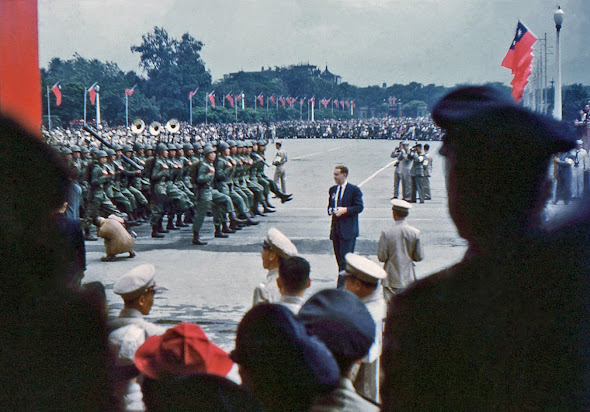 More Army men or are these Marines?
Check the people standing off in the distance.. 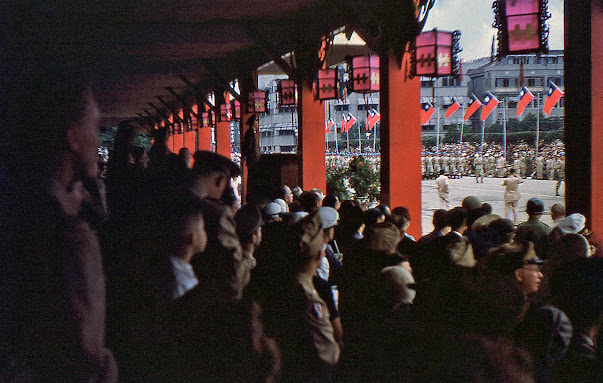 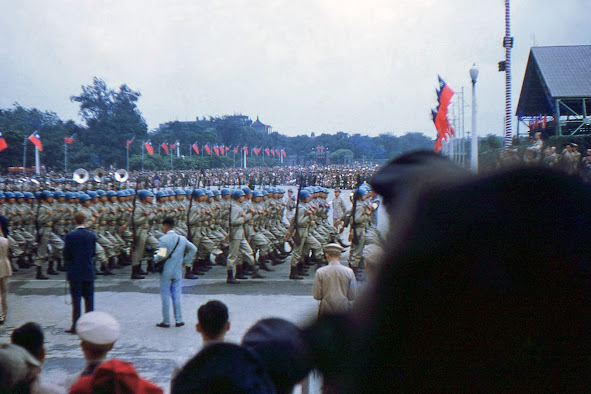 Blue Helmets.. Not sure. 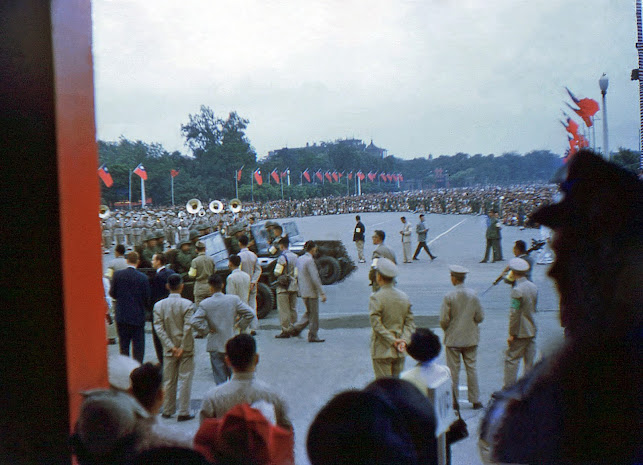 Look off in the distance above, how many parade participants are standing? 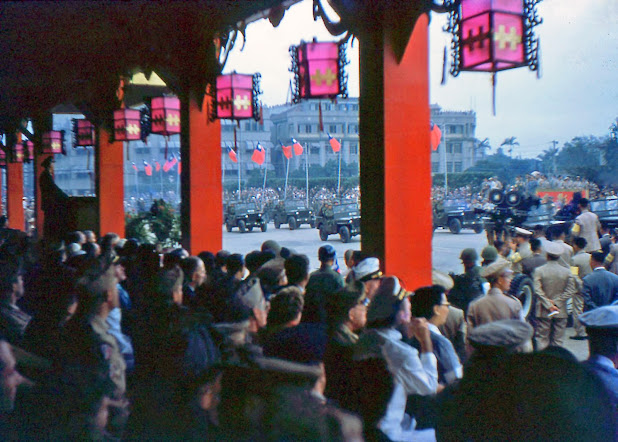 Here come the Vehicles...
and President Chiang can be seem, look closely...
Look on the right side, Motion Picture Cameras.... 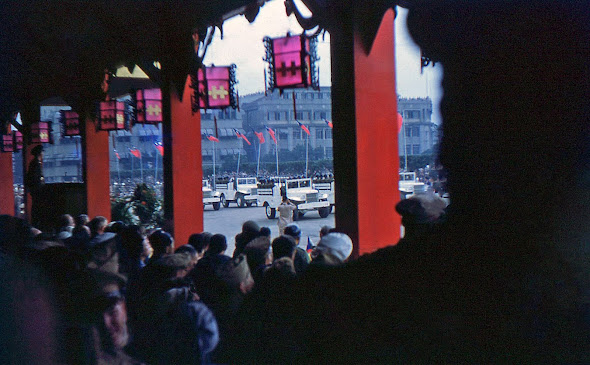 End of the Parade is near.
President Chiang seen on the left 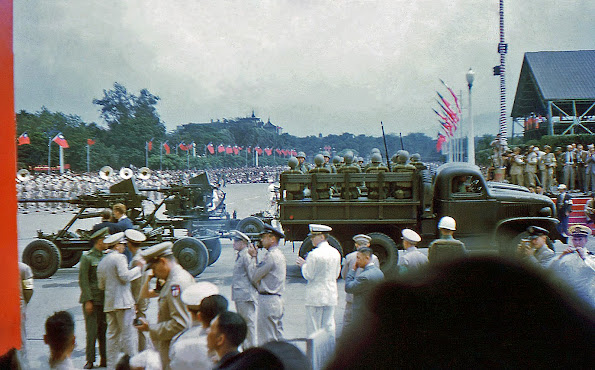 Dunce and a Half vehicles carrying Soldiers and  pulling Weapons. 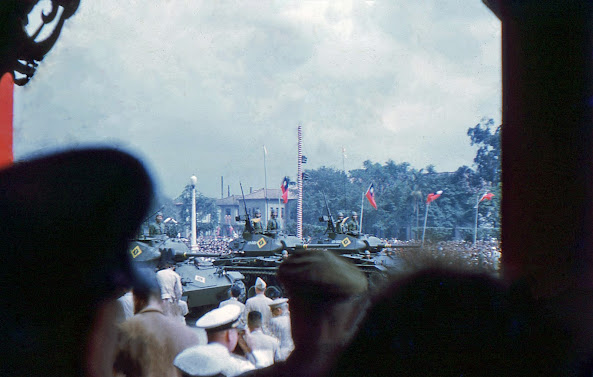 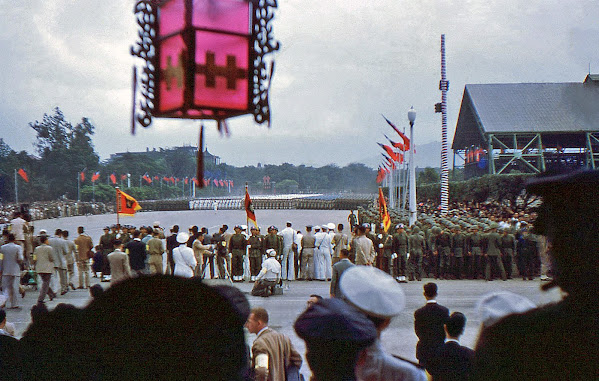 Absolutely outstanding Parade!
Look out in the distance.
Thousands of Taiwan Military Men, all 4 services standing in Formation...
Touch you heart....
May God Bless and Protect TAIWAN.