If you missed the previous story we posted on the US Navy Facility at Tainan Air Base, featuring Larry's photos, you can read it HERE.

Many of us who served in Taiwan, went about our business and duties impervious to many things that went on around us.  We never had time to slow down and smell the roses.

A number of Larry's photos feature some of the Taiwan men, who together, maintained the buildings and grounds at Det. 4 Tango, Tainan. 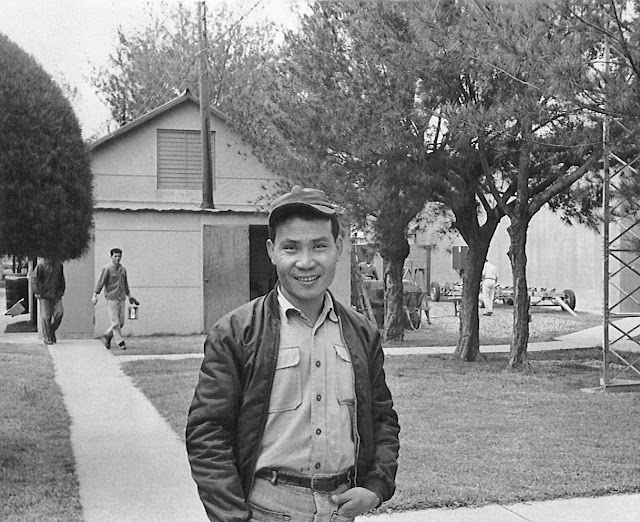 Larry did not recall any of the men's names who worked in maintenance. (43 years ago)

Looks like that man in the back, with the paint can, is heading out for a paint touch-up.

It must be the winter season at Tainan, everyone is wearing a jacket or long sleeved shirt. 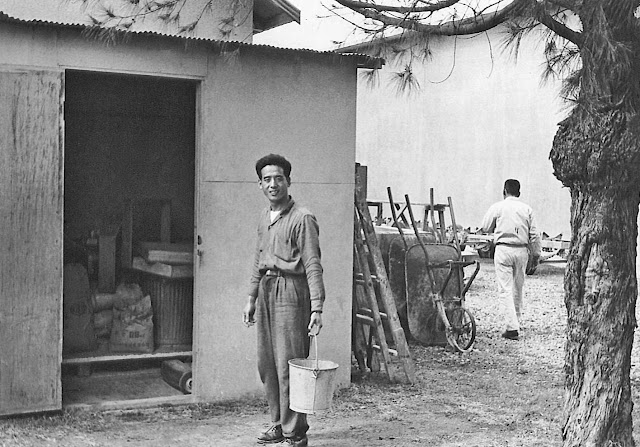 Hello sir, what's that in your pail?

The shed, lots of odds and ends in there. 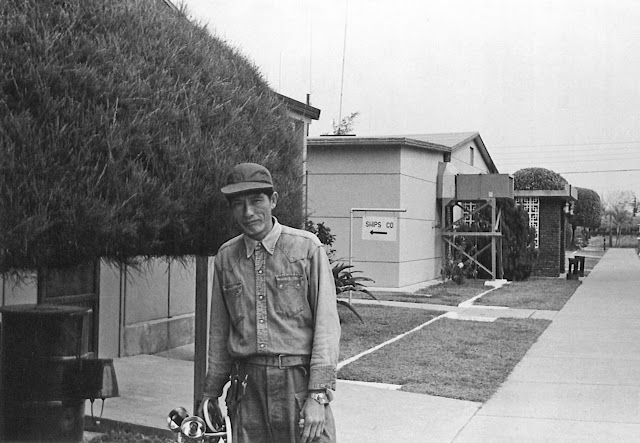 This older gentleman doesn't look too happy having his picture taken..

What's that he's holding in his right hand?

The next building down the sidewalk, The "Fly-A-Way Restaurant." 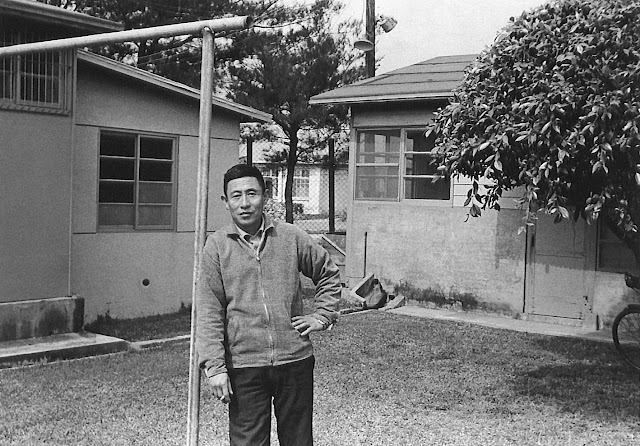 This fellow looks like he's a supervisor.  Resting against the pole, having a smoke. 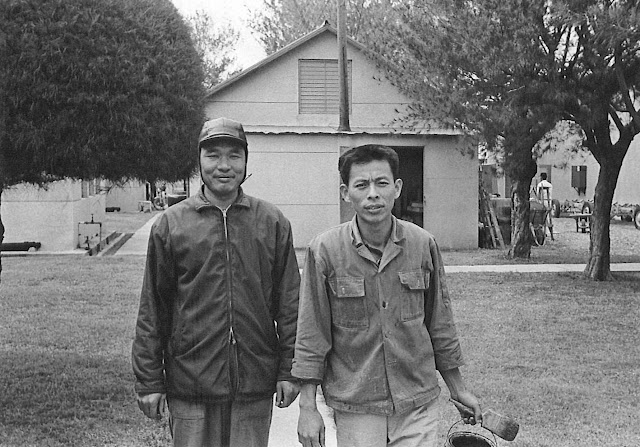 Here's the same fellow, seen in the first picture above, carrying the can of paint.

And, another "cold" worker, bundled up with a heavy coat and hat.

Same storage shed in the background. 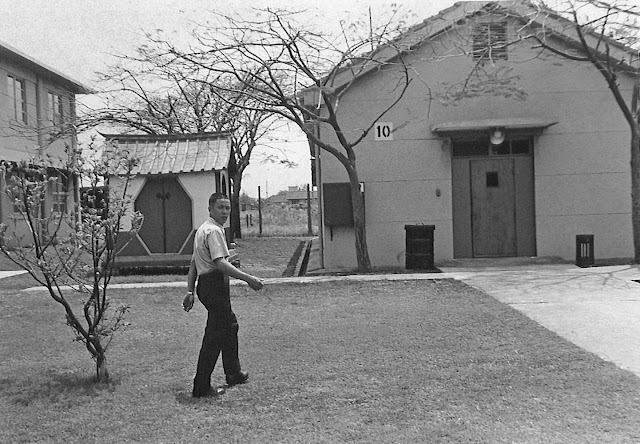 This photo looks like it was taken at a later time.

The trees are sprouting their spring leaves.

The 2 story building to the left was for Air Asia Employees and visitors to Det. 4 Tango. 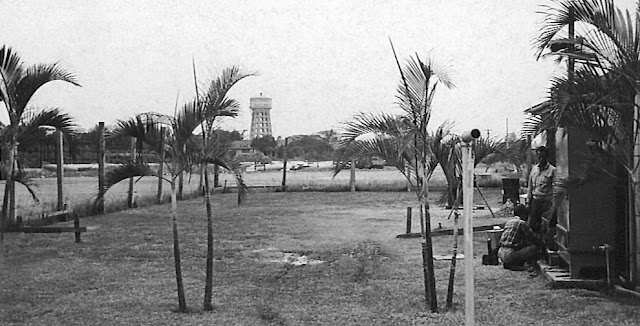 Looking toward the CAF area, just south of the Det. 4 Tango area.

That CAF water tower may still be standing today?

Wonder how large these palm trees are today.

Maybe someone who attends the next "Open House" at Tainan, could stray down to this area and take some photos of how the area looks today. 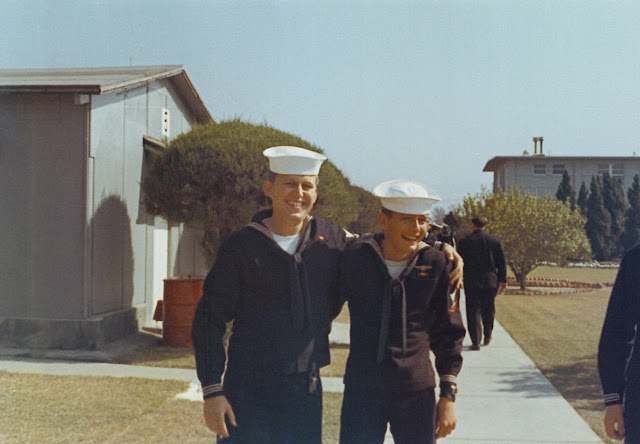 John Bozak and Pat Mitchell on the day we had local school children on the base to see the grounds and our aircraft.

You can see additional photos of the school visit, on our previous blog post HERE. 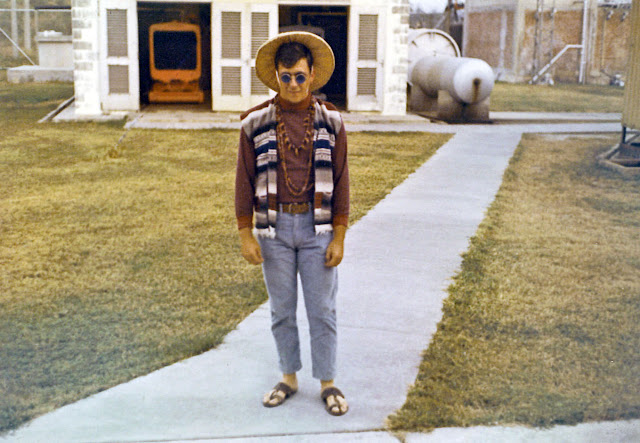 "That is me with my vest from Tijuana and my local worker hat, standing in front of our auxiliary generators.
I would start them when we lost local power. 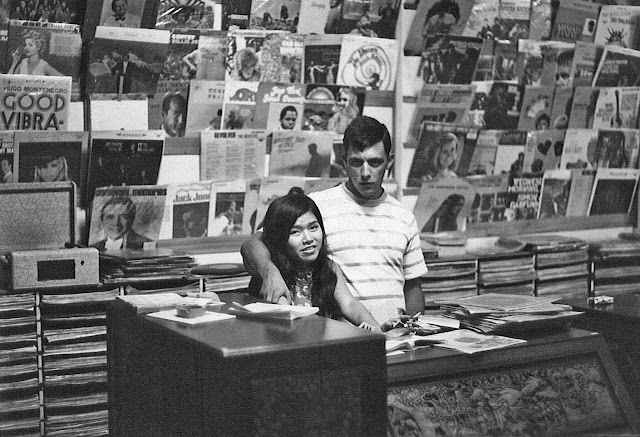 One of the "bootleg" music and record shops in Tainan. 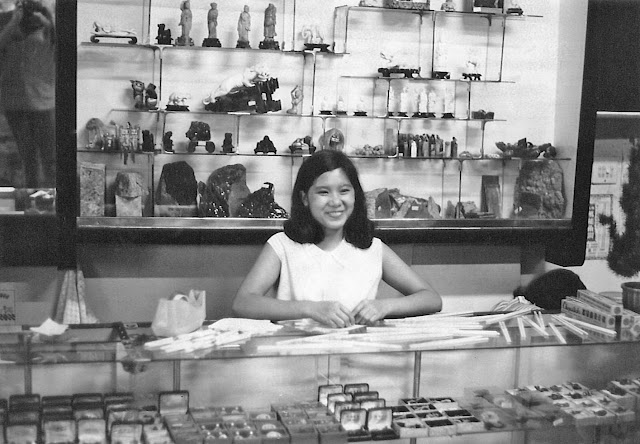 A handicraft and jewelry shop in Tainan.

What young man wouldn't want to visit this shop, if nothing more than to talk with this beautiful young woman. 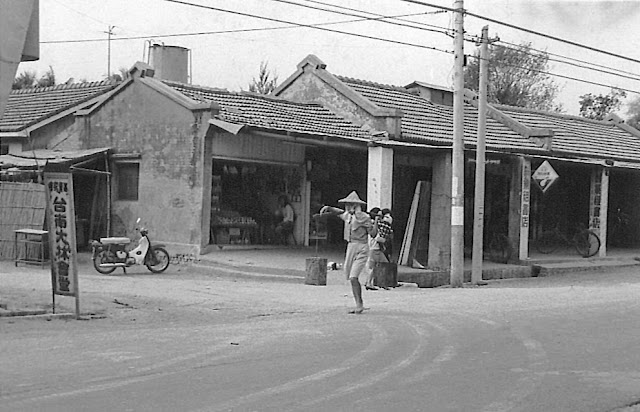 On the way to downtown Tainan.

Watch out!
That truck coming down the street looks like a Navy gray colored van! 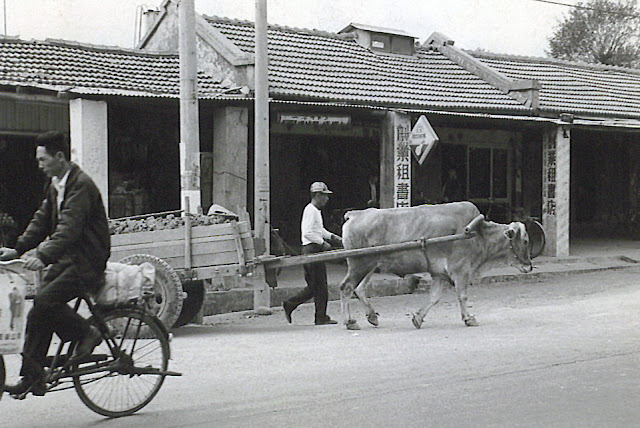 Hauling a load of broken bricks. 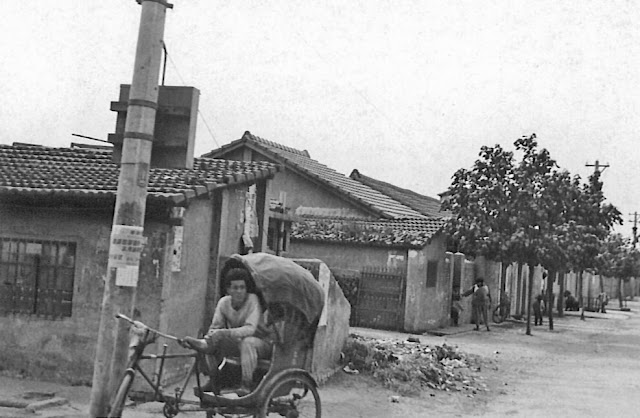 Taking a break, waiting on a fare. 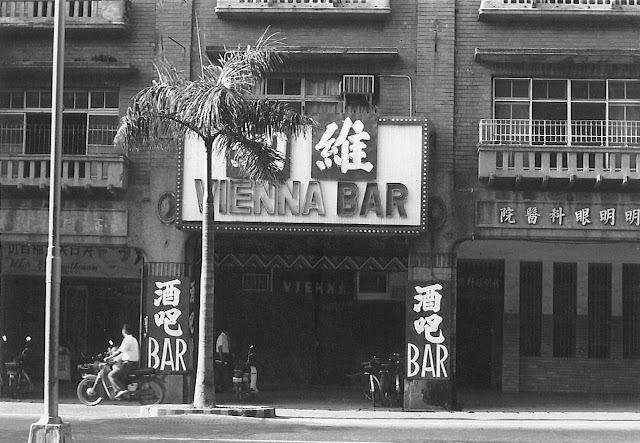 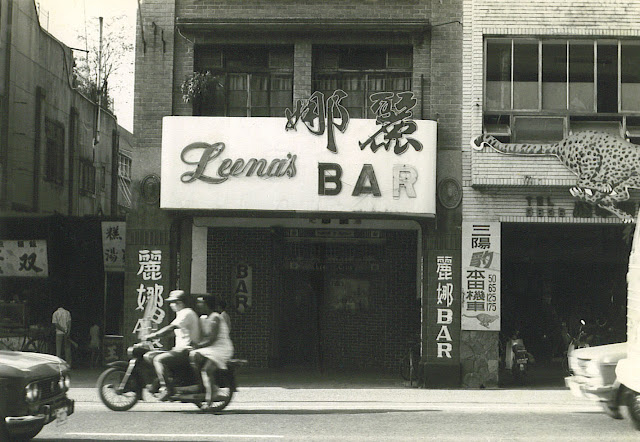 These were two of about four or five local Tainan bars the servicemen frequented when we were off base.

Another popular bar was called the Black Cat. 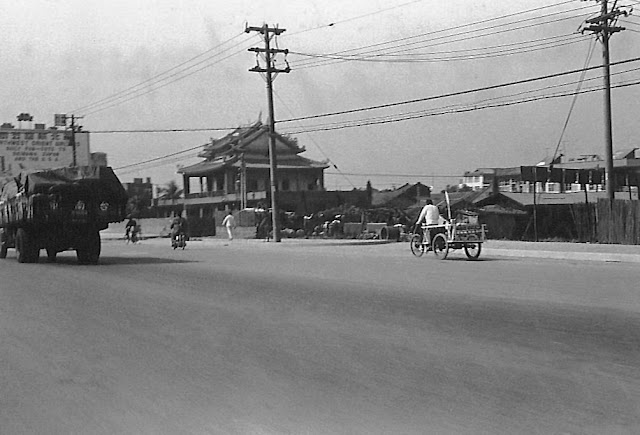 On a trip to Taipei. 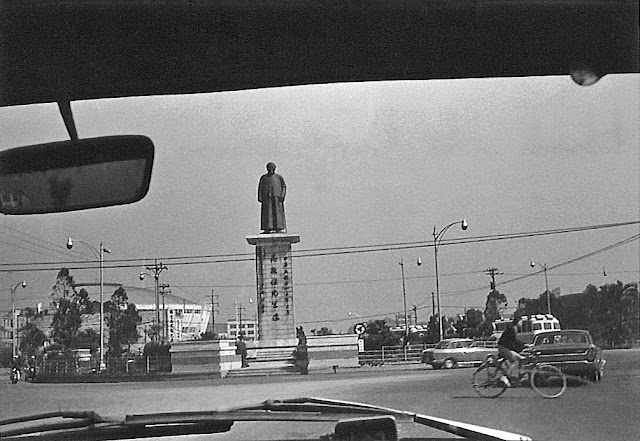 Another photo taken on a trip to Taipei. 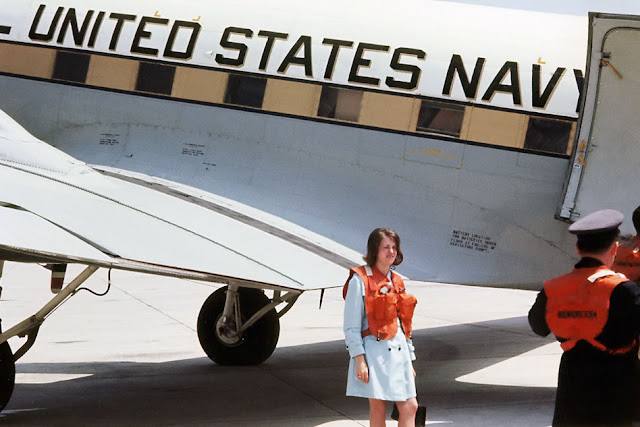 Here is the US Navy C-47 aircraft assigned to Tainan.

This photo shows Mrs. Wexler, wife of then Captain Ed Wexler, USAF, boarding the US Navy C-47 aircraft at Tainan for an R&R flight to Hong Kong.

I hope you found something interesting in this series of photographs.

These were exciting times in Tainan and Taiwan.

Many thanks to Larry Michel for sharing his Tainan tour..

Larry sent over a photo taken in Tainan on his arrival. 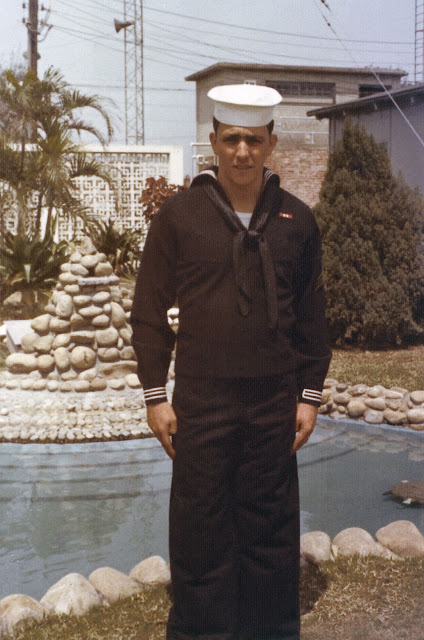 Posted by Taipei Air Station at 11:30 AM

1.Next to Vienna Bar on the right side, is a ophthalmology clinic called ''Ming Ming eye hospital''（明明眼科醫院）

2.Next to Leena's Bar on the right side, is a Honda motorcycle store with a panther pincture（三陽豹本田機車）

3.The picture with a stature in center and a stadium dome on far left was taken at the intersection of Dun Wha North Road and
Nanking East Road Taipei City（台北市敦化北路與南京東路口）

The man in the stature with a stick is Wu Ji Hei（吳稚暉）, a senior statesman of Guou Ming Dang.

The stadium is called 中華體育館, which was bured down by big flame in late 1988.

Some of the buildings in these pictures of Tainan Air base are still standing today.

Dinky, Skinny, Huang and all the "Fella's". I still have furniture made in the Carpenter Shop there from 1969. Paid for it with cigarettes!! Forget Charlies Bar it was the first bar I ever went to at the ripe old age of 18 in 1964 during my first TAD to Tainan. Yes Liberty was GOOD. Went back to Okinawa after 4 months TAD only to return for PCS duty in March of 69!! Departed in 1973.......hey somebody had to do it!! Too bad there isn't a picture of the "Bunny Bus" that we used to take flight crews to town and take the troops to Ping Tung and Kaoshung!! Lew Mitchell just made things happen and we had some fun. Anybody remember the Pig Roast where the squirrelly RMSN could not keep the turns up on the pig and damn near burned it up?? Or the big ass turkey in the garbage shed we had for Thanksgiving 1970?? How about when we changed the name of the Fly Away to the Spinnaker??? How about a Moment for the VQ1 crew of LCDR Overstreet that was shot down over Korea with some 2 airplane loads of furniture in our Warehouse. That was a real Bitch because when they came to get it we knew all the names on the parcels!!Sad Day.