More photos from Captain Ralph Henricks, USAF,  the Base Procurement Officer at Tainan Air Base from November 1967 to December 1969.
Today, photos taken in and around the city of Tainan. 1967-1969 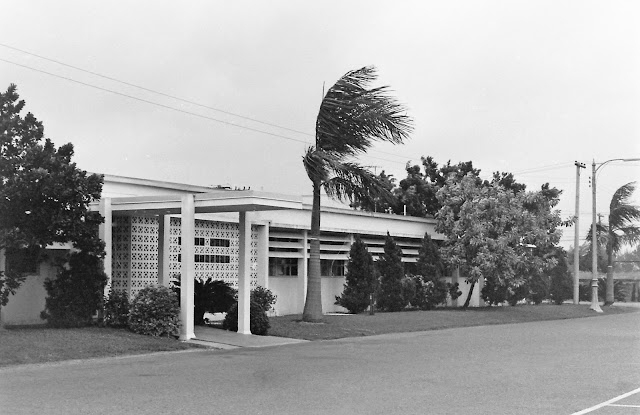 Typhoon Coming!  Trees beginning to bend as typhoon approaches.  The building is the Tainan Air Base Dispensary (small hospital.)

Captain Henricks talks about his family residence in Tainan:

"We lived in "20 House Compound," which was a military off-base housing complex for enlisted and officers assigned to Tainan Air Base.  It adjoined the American School (K-12) and was owned by the Bank of Taiwan, I believe.  It was a very favorable place to live and we were very fortunate to snag a place there (even if it was House # 13.)
I asked Captain Henricks about the typhoon that struck Tainan while he was living there:

"As I recall, the locals didn't think it was much of a typhoon -- but we surely did!  It mostly took out trees, denuded a lot of them and took off some ill constructed roofs ( I believe no damage was incurred to the military buildings -- could be wrong, but it wasn't a big operation for the base to clean up the damage, so we didn't have much of any contracted work to do just for that event."

"It hit in the middle of the night, and our 'houseboy' Chuan Bing Han and I were out in our skivvies and sandals in a downpour of rain that was like being in a warm shower!  We had to 'batten down' the hatches' on the house in an attempt to keep from having any broken windows. (We succeeded.)  We lost the 20 foot avocado tree in our back yard and a lot of limbs down all over the base and town, but very little property damage, as I mentioned above.  The Air Asia maintenance area on the north end of the base was fully loaded with battle damaged aircraft from 'Nam', tied down nose to tail, wingtip to wingtip.  Nary a one was lost or came unmoored.  Now, THAT was a miracle and the result of great planning by the Detachment Commander, Lt. Colonel George Yoo, USAF."

Thank you Captain Henricks for sharing all of your wonderful photographs.

I hope you enjoyed our peek back into some sights of Tainan in the 1960s.

If you have old photographs and/or stories of your time in Taiwan, please contact us.

Posted by Taipei Air Station at 8:49 AM

Brings back a lot of memories. I was stationed at Tainan AB Jul 66-Oct 67 in the Fire Dept.

The group of school boys was probably heading to Confucius Temple on Nan-Men Road to attend a ceremony.

I think the first picture is the Ching Shui train station which is on the coastal line near Feng Yuan.

Chin Shuei, a town in Taichung County（台中縣）. About 100 killometers north to Tainan.

Chong Hwa Daily News, a Tainan-based newspaper, was one of two major newspaper run by Kuo Ming Dong （國民黨） in those days.

Today, it is still run by Kuo Ming Dong but is way downsized than what it was in 1960's.

It had been privatized in early 1990's but Department of Finance is still the biggest shareholder.

There are three commercial signboards hanging on front side of the building.

A little bit far ahead, there is a building with a flagpole. It's a police station.

I really appreciate what the blog host has done for keeping Taiwan history alive.

More great photos! Number 9 (B&W photo of a building on base) is actually the TAB dispensary. At least I believe that was what it was officially called, but it's a misnomer: it was actually a small 6-bed hospital with three doctors and two nurses assigned. I had the unfortunate experience of having spent a night in one of those beds and my wife was a Red Cross volunteer there one day each week.

thank you for these great pictures.It brings back a lot of memories.Ilived near the tainan american school when I was a child(more than 30 years ago). I was always curious what the scenery inside and envy the surrounding . thank you for your contribution
for taiwan and tainan.

PHOTO 8
It's here now!
http://goo.gl/maps/C2Tsn
The little boys are going to Confucius Temple.
It's a customs .Wish them study well!

I posted at wrong place, re-post here.
One of picture showing a group of students walking on the street. They are heading to "孔廟", cause they had a right turn far from the line and that is the location of "孔廟". The pitcure was shutten from the direction of "湯德章記念公園" toward "孔廟". I was born in Tainan, and got the education at the junior school aside the " 孔廟" from 1967 to 1972.
"孔廟"=Temple of Confucius
"湯德章記念公園" =Tang De-Jhang Memorial Park