Life of a Young Airman in Tainan 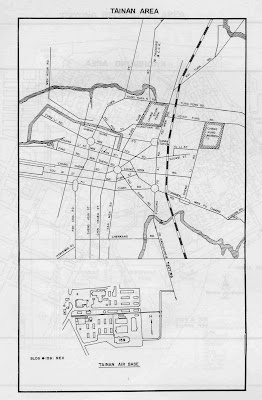 Here is the US Forces Telephone Directory Page of Tainan and Tainan AB circa 1977 courtesy of Les D.

Mike McCaffrey has a few rememberances of his time in Tainan as an 18 year old on his first assignment, in 1961.

And then there was the day a bunch of us from the Comm. Squadron in Tainan decided to hit the beach for a picnic. There we were: lots of dogs and beer, nice sand and surf, perfect day. We built ourselves a nice fire and proceeded to heat up some dogs, just enjoying the heck out of ourselves … but … THEN: some Chinese military trucks roared in, troops jumped out with rifles with LONG bayonets, and surrounded us. Since the rifles were pointed at US, we sort of decided to drop the dogs and put our hands in the air. We asked if any of those equally young troops spoke English, but they just stared at us. Finally, an officer arrived in a staff car and came up to us, our hands still in the air. He, speaking English, told us we were breaking the law by lighting a fire on the beach, stating that was a signal to the Bad Guys (on the Mainland) to attack. Seeing that we were obviously harmless, he told the troops to lower their rifles, and get back into the trucks. He instructed us to douse the fire and to NEVER do that again. And off they went. We were pretty well shaken by all those rifles. Needless to say, we didn’t go back and brag about this to anyone, but we did quietly pass the word about bonfires.

There was an air shuttle run by the Chinese Air Force (Nationalist) from Tainan to Taipei. A few of us from the Comm Squadron were sent up to Taipei for some sort of training with the Comm Headquarters up there. We were driven planeside to catch the flight. I will never forget the sight of that plane: it was a Goonie (C-47) … painted drab green … had the large Nationalist flag painted on its tail … sitting out by itself on the tarmac on a bright and beautiful Tainan morning. Inside, it had the old bucket seats, that webbing one sees on those old WW-II “paratroop movies.” The door to the cockpit was open during the entire flight, and the Chinese pilots would look back at us and smile. As the flight got off and going, the plane would suddenly lurch downwards and then back up. Seems the young Chinese pilots did that quite frequently, diving down at the mountains, to see if the passengers would get sick (some did) … and the young pilots would just look back and laugh.

Who can forget that we did all our transactions off base with the local money: NT Nationalist Taiwanese Dollars? Seems I might have spent a few of those things buying a few beers at a few local establishments. The beer, if I recall it correctly, was pretty horrid!

RADIO
I recall we had a pretty good AFN RADIO setup there in Tainan. A guy named DON CORMIER (kormay) was one of the local jockeys, played all the good stuff from the States.

Another station I used to listen to a lot was RADIO MANILA (forgot the call sign, it HAS been 47 years!). It was usually around 2100 or later at night, on a warm Tainan tropical evening, and I can still hear the sexy female voice saying: “Radio Manila, in the air … everywhere.” It went sooo well with cold San Miguel beer ….

One morning, I was returning from breakfast, heading for my dorm (our living accommodations were definitely not something one would call a “barracks,” they were really nice dorms). I was feeling pretty frisky (18 years old) and was (for whatever dumb reason) attempting to juggle a few oranges as I was walking along. I did, vaguely, recall a car having just passed me, but paid more attention to the oranges. Just then I heard the noticeable screeching of tires as the car flew up to me in reverse. The Base Commander, a Colonel Eaton, jumped out and asked why I didn’t salute him, since his staff car DID have the appropriate plaque on the front. Oranges on the ground and mortified, I was at attention and attempting to stammer how sorry I was. He made me promise I would NOT make that mistake again, gave me a little smile, and drove off. I didn’t make that mistake again ….

We were all kids back then. Young, full of life, and immensely enjoying our lives and times there in exotic Tainan. I can still see all the faces, frozen in time and all young and vibrant in my mind. One, today, wonders whatever happened to those guys? About all I can hope for is that they went off and had as wonderful a life as I was fortunate enough to experience. If ANY of them see this, please get in touch, would love to reminisce.

Yep Tainan was great for a young American kid fresh out of boot camp.

Our paychecks went way too far in heaven though. Gave us the impression that we were wealthy. Now that was great while you were there. Not much that you couldn't get on that island from bootlegged Doors albums to Sansui and Akai stereos.

In addition unless you were from the south, a big city or had lived close to a base, you probably weren't even aware of what race issues where. So as you are making friends with these cool black guys that like to dress nice, chat, dance and party, you are unknowingly buiding a wall of unfriendly racist white people around you. The people responisbile for teaching you, guiding you and untimately promoting you.

Now when you returned to the states you couldn't seem to afford the basics. Clean uniforms, haircuts, shined shoes, food, movies, couldn't drink and you sure couldn't find a ladies tea(tsk, tsk).

Your now broke, can't keep you hair trimmed close enough, your uniforms all have to be replaced because of the bleached Taiwan threads and you can't afford to get the new ones dry cleaned, even on base you can't afford smokes or gas and can't drink real beer and what are drugs. Here you are returning to the US just at the peak of the drug culture.

You are now probably realizing just what a race issue you created by being a naive white kid. Rumors on base of fights, beatings, busts all related to race. Your white co-workers hate you and your clack co-workers hate you to now. And in town you are simply a spinner or a fly.

Soon you would have more misunderstandings, discipline issues, PTS, depression and if you are unlucky - they want you to walking around the base when the temeratures are 40 below.

That's what typcially happened when you returned from Paradise. They sent you to a northern base like Minot, Grand Forks, Offet, Ellsworth, Great Falls and then they abandonded you when you couldn't adjust back to what they called normal.

Hey but Tainan was the blast. I hitched the island 5 times.