Ralph Henricks, the Base Procurement Officer at Tainan Air Base during 1967-1969, sent me a CD containing many photos of Tainan AB and the surrounding area.

I posted some of his photos on the Taipei Air Station Web Page a few months ago, you can see them HERE.

Today, some interesting photographs Ralph took over a long period of time in 1968, as work on a new water line stretching from a mountain reservoir above Tainan made it's way along Ta Tung Lu Road toward the main water purification plant.

Ralph wrote about the photos on the water line project:

"It was a project of the City.  I have several photos of the operation because it took a loooong time to complete and was a good chance to see how things were done in Taiwan in those days - everyone worked very hard - especially the women!  Besides, it made the daily drive from home to the base a bit tenuous for several months and my son was very interested in seeing what was going on!" 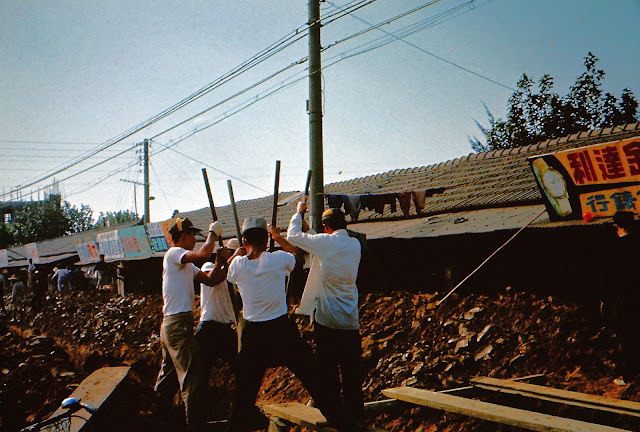 The street is torn up along here with dirt piled up in front of the shops.
Maybe there is a walk path between the dirt and the shop entrances. 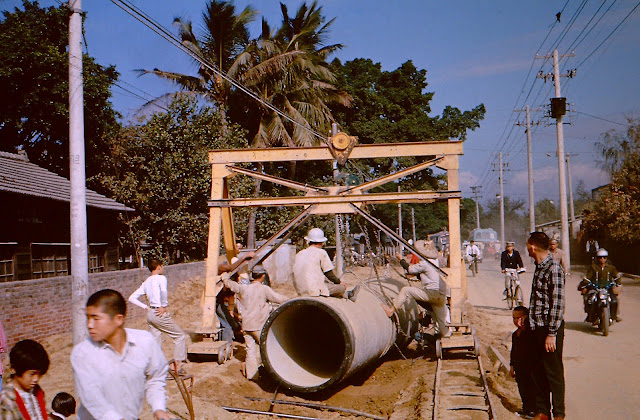 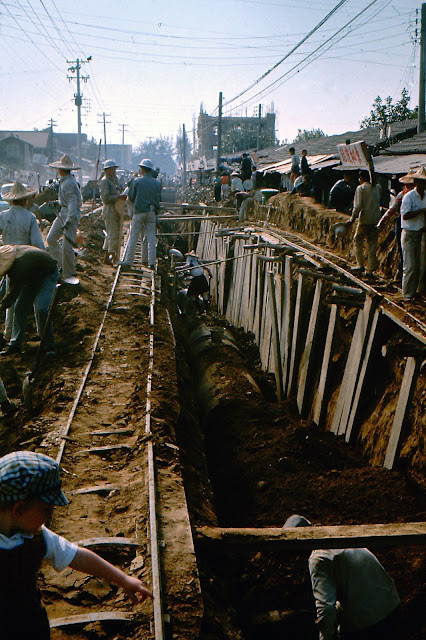 The pipes are laid and the dirt is thrown on top.

One wonders, did they lay a bed of small pebbles and sand down before the tiles went down? 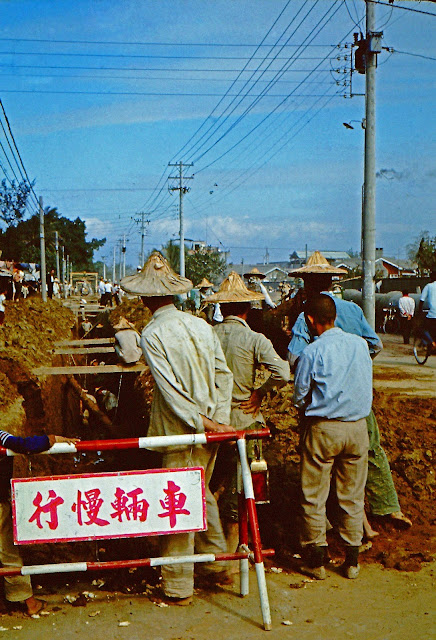 Everyone is interested, I'm not sure if these men are working on the line or just happen to be passing by and have stopped to observe.

Had I passed by the job on foot or on my bicycle, I'd of stopped to nose around myself.  It's tough to pass any large construction project without peeking inside to see what's going on. 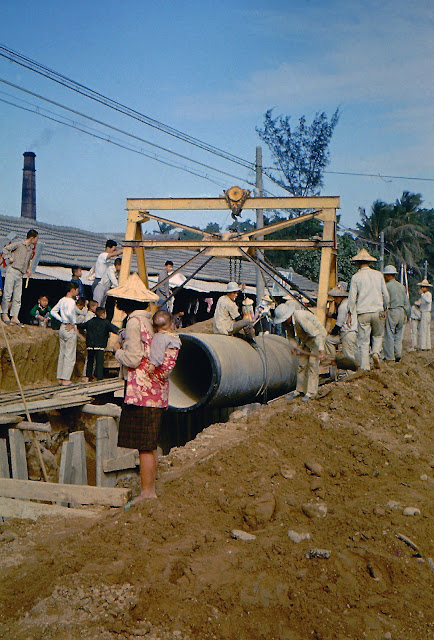 We've got kids hanging around the hoist, and a Mother with baby checking out the scene.

Everyone has an opinion, and for sure, there were a lot of voices heard telling the workers what to do next, maybe not loud, but, nevertheless spoken. 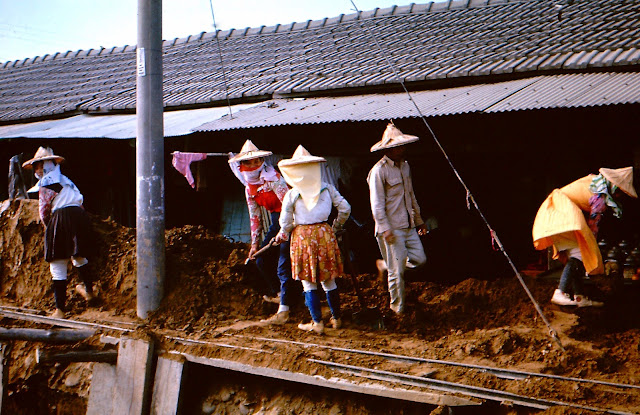 OK girls, lets fill it in.

Lots of shovel fulls of soil to be moved, but, these women were working, bringing home wages, which sparked the economy of Taiwan. 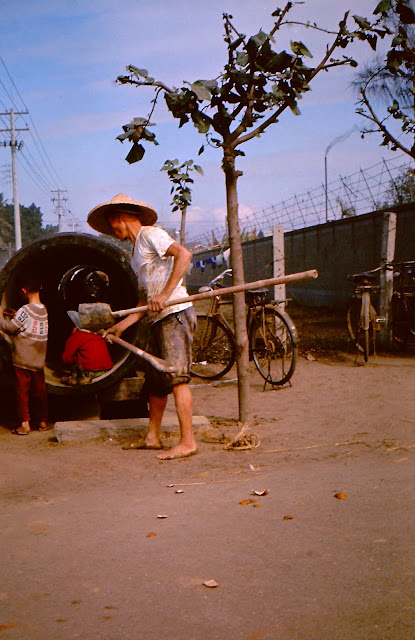 Looks like the children here, like kids anywhere in the world have found something to keep them occupied.

Crawling through tiles will always bring a smile to a child's face. 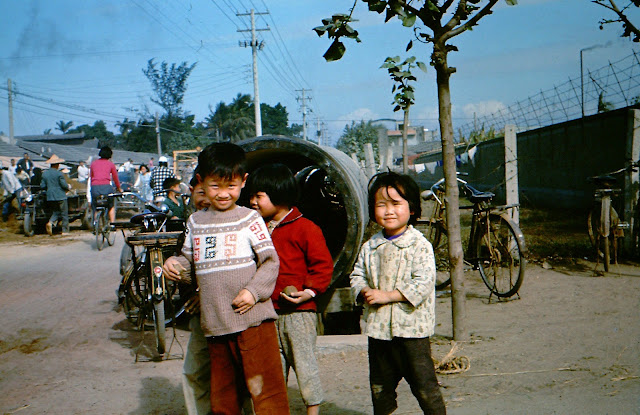 These children seem to  be having fun, how fast days passed at their age. 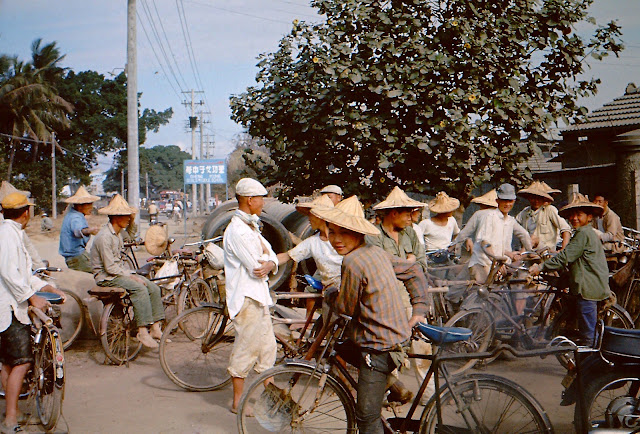 Lots of Bamboo hats in this crowd.  There is one motor bike.
The men are hanging around for some reason.  Are they waiting for the possibility of being hired? 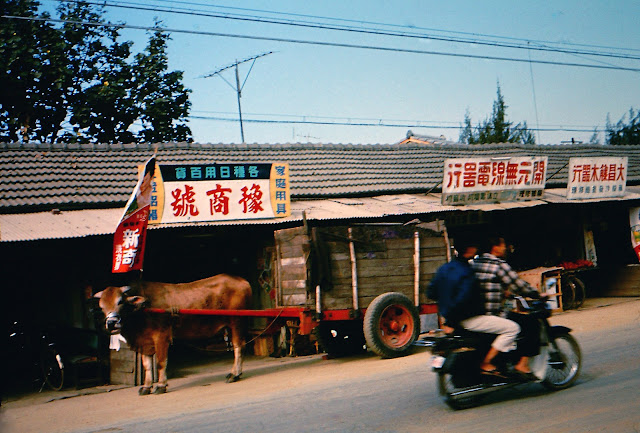 Up ahead of the water line construction, this buffalo waits.

Take a close look in his eyes and face, he seems to reflect an air of content and peace of mind.


Please leave your thoughts and knowledge of Tainan in a Comment below.

WOW, I was born in Tainan in 1970 and my parents have lived at Ta Tung Lu since late 1960s. My father even worked at Tainan AB club as bartender. It is amazing to see the senses of my birthpace just before I was born...

Thanks for sharing this with us! Some really amazing features. This is excellent information.
water sign

My husband and myself were at Tainan air base 1969- 1971. What great memories this brings back. Thank you.