What began last year with a ceremony at the old Taipei Prison wall,  we again carried on this Memorial Day.

As dawn broke early this morning we had light rain showers, overcast skies and low hanging clouds over Taipei. If you were ever assigned to Taipei, you'll remember, typical May weather.

The ceremony was held again this year, along side the old north wall of the Taipei (Taihoku) Prison.. 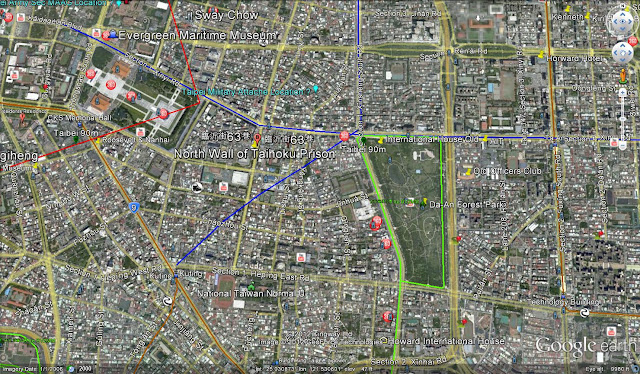 Here is the location of the old wall.  Click on this photo, it will open in a larger version.  Just about the center of the photo is a red balloon with a B inside of it right above the words, North Wall of Taihoku Prison.

That's were we gathered this morning for the ceremony.

I know some of you would like to see where this old prison wall is located.  Some of you were here when the prison was still in operation.

Folks begin to arrive and we started the ceremony around 11:15 AM.

Our Master of Ceremonies today, Jerome Keating.
Standing beside Jerome, a journalist from Radio Taiwan International,recording his remarks. 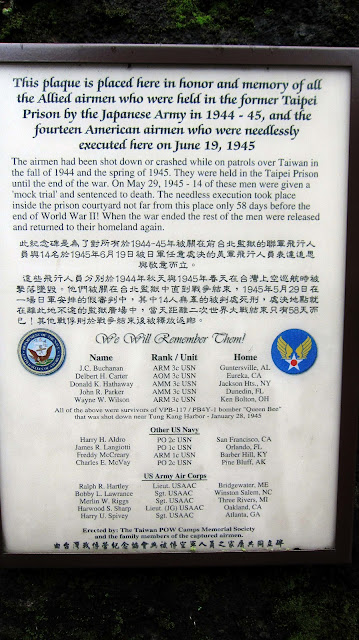 Here signage that can be seen just to the left of the US Flag in the above photo, just behind Mr. Keating.


The words above explain why we have gathered at this site.  It holds special significance in Taiwan.

This is not the only place United States military were held, killed and died in Taiwan.

Read more about the many United States and Allied Military folks who were held by the Japanese military as prisoners and many who perished in Taiwan, HERE.

A short video, with a portion of today's Memorial Day Ceremony at the old Taipei Prison Wall.

Some of the folks who turned-out this morning for the Memorial Day Ceremony in Taipei.

Special Thank You to Mr. Jerome Keating (with notes in his hand) for his efforts in bringing this ceremony together.

And, to those that took time out today to attend the ceremony.

We will continue to hold a ceremony each year, please join us next year...
Posted by Taipei Air Station at 1:09 AM