Vice President Humphrey's Air Force Two departed from Manila early on January 1st for the short flight to Taipei. Accompanying Mr. Humphrey on this trip, were his wife, one son and his Special Assistant Jack Valenti. 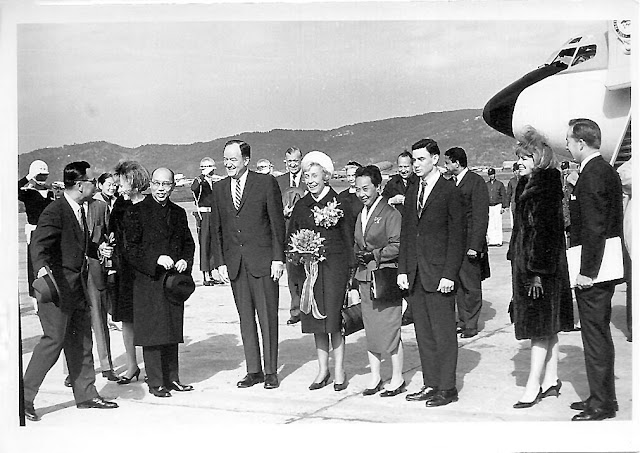 As the delegation stepped off the aircraft, they were welcomed by Premier C. K. Yen (holding hat),  who later (in 1975) became  President of the ROC,  standing next to Humphrey, his wife Muriel, Mrs. Chen (?), Humphrey's son H.H. Humphrey III. (?) 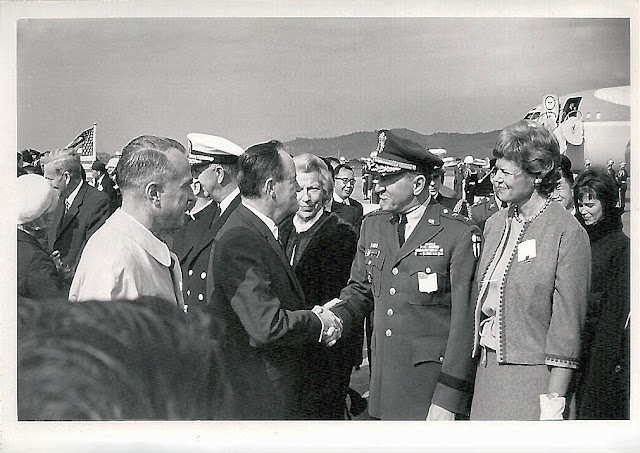 Humphrey walks the receiving line, greeted by a host of US and Taiwan government officials as well as foreign diplomatic corps dignitaries.

Here he shakes hands and is greeted by Major General Dwight B. Johnson, Chief MAAG Taiwan and his wife.  I believe the US Admiral in the left background is Vice Admiral William E. Gentner Jr., Commander, USTDC. 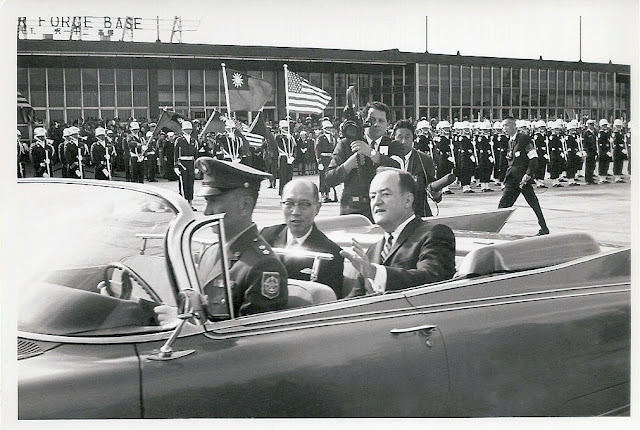 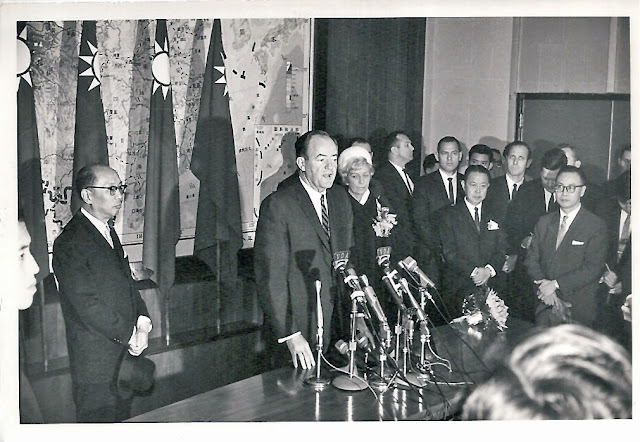 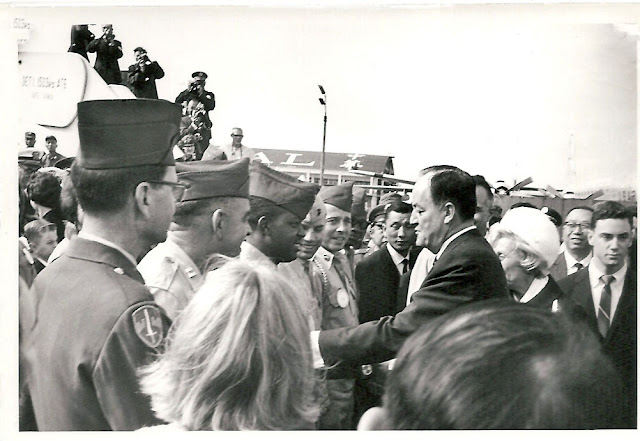 Humphrey and family press the flesh with US soldiers outside of VIP Lounge area.

It was reported by news sources that Humphrey met with some US Troops on R&R from Vietnam.  These men could have been the troops. Probably an R&R charter aircraft landed around the same time and some of the men were invited to meet Mr. Humphrey before they headed downtown to the Sea Dragon Club for processing.

According to news reports, the Humphrey visit included these stops during his, short 7 hour visit in Taipei:

Attended a Briefing in Premier Yen's Office at the Presidential Office Building.

Laid a wreath at a Taiwan Shrine, accompanied by Admiral Ni Yueh Si, Chief General Staff
In the trees down the hill from the Grand Hotel, there is a building and some stone shrines. You would not know they were there unless you explored the area which is hard to get to unless you walk down from the hotel and look around.  Pretty much hidden from view today, although back in 1966 it would have been more open.

Received by President Chiang Kai-shek at his home in Shihlin.
Wonder what their conversation covered?

Humphrey stops at his suite in the Grand Hotel.

Muriel Humphrey visits Handicraft Center in Taipei
Said to have ordered a number of lamp shades. 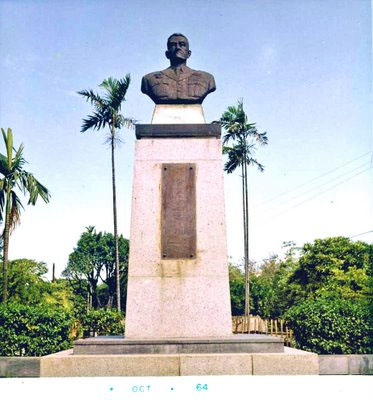 Photo courtesy of Jim Caumo
This was the General Chennault Memorial as it stood on the grounds of the "Taipei New Park," in 1964.
The plaque, or the outline of it, looks to be missing.
Some years later, this Memorial was removed when the park was closed.
The park later reopened as the "228 Peace Park."
The Memorial was moved to the Museum at the ROC Air Force Base in Hualien.
My friend Wang Chun,  located this Taiwan Government video of Mr. Humphrey's visit HERE.           (There is no sound on the film)
The events may or may not be shown in the chronological order they occurred...
The video seems to cover the series of events of January 1st 1966 during the Humphrey visit.
Don over at the USTDC Blog has photos of Mr. Humphrey's departure as his visit to Taipei concluded later in the day, 1 January 1966.  The visit lasted approximately 7 hours.

As we usher in the New Year 2012, please take a few moments to watch some of the most beautiful scenes of Taiwan you will ever see.

Ahh, this film with it's outstanding music, tugs at my heart, an old man tears up.

As usual, please leave your Comment,  or e-mail me at taipeiairstation@yahoo.com

Great stuff! Thanks for all your efforts in keeping the memory of the "good old days" in Taiwan alive. USTDC in Taipei was my first duty station back in 1963. I loved Taiwan then, and I love Taiwan now.


After that, Mr. Tao presented a briefing to two VPs and the press.


Until now, he is still highly reputated by Taiwanese people.

In his later life, he devoted himself to the development of high-tech industry and earned himself the nickname '' Godfather of Taiwan's High-tech Industry.''


Before 1964, Taiwan's economy and agriculture sitll depent on US Aid.


In 1966, although US had stopped economic and agricultural aid to Taiwan for two years, Taiwn still had a large number of under construction items that were supported by former US Aid fund.


I guess that's why VP Humphrey was listening to that briefing.

The man is Chien Fu.

Chien Fu （錢復，Feb 17 1935 -- , Phd Yale University） was a mid-ranking government official of Ministry of Foreign Affairs then. A year later, he would be the English Interpreter for President Chiang Kai-shek.

In December 1978, Carter Administration broke up diplomatic relations with Taiwan and sent a delegation led by Warren Christopher to Taiwan. In that time, Chien Fu was second deputy minister of Ministry of Foreign Affairs. He played quite a role in that event.

From 1983 to 1988, Chien Fu was Taiwan's representative to D.C. That means, in that five years, he was like an underground Ambassador to US.