Taiwan's official Double Ten Day 雙十節 celebration takes place tomorrow morning around 9:00 AM.
I read in the newspaper that there will be different formations of military aircraft overflying the Presidential Palace during the ceremonies.


Among US representatives attending is former Secretary of Defense Donald Rumsfeld.
Since I was not invited to attend the celebration, I headed out late this morning for the Presidential Palace. I wanted to let everyone see what the Presidential Palace front area and the seating, performance areas, and streets looked like with all their beautiful decorations.

It's been raining off and on for the past week and today, it was sprinkling, the temperature in the high 70s, just about perfect for not worrying about getting wet
I caught the bus, got off 1 block west of the area.  It was raining more heavily, I had to pop out my umbrella.

Only a few folks were out taking photographs and most were huddled up under their umbrellas.  I walked down the sidewalk, stepping over all types of wire, television cables, power lines, audio lines, lots of workmen were standing around watching and others were pulling cables, still others were trying to look busy.  I reached the left corner in front of the Presidential Palace. It was wet. 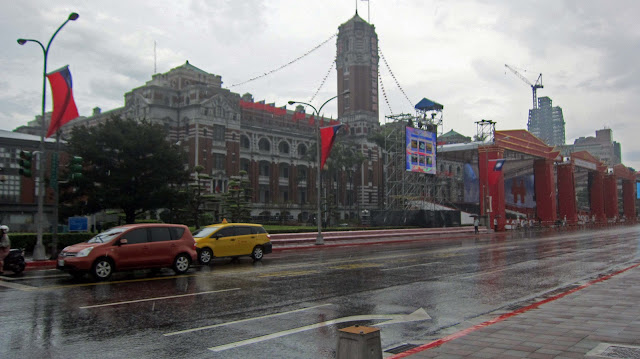 You recognize this corner and the Presidential Palace.  The blue looking sign in the photo, that is a television screen.  They had six different cameras up on the screen in this photo.  I would hope tomorrow the screen will only have 1 camera's feed up, or no one will be able to see what's happening.  Some of the seats are way back...  as seen below 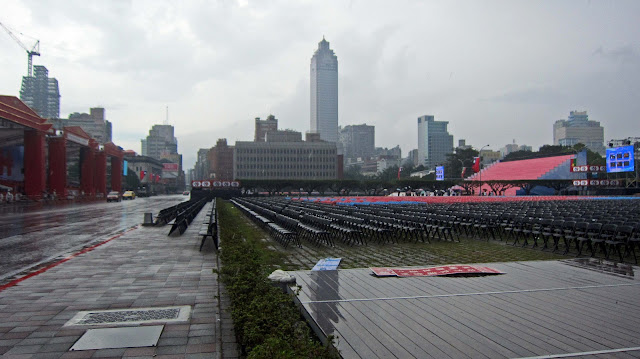 Looking north, the Presidential Palace and official Reviewing Stand.  To the right hand side of this photo are about half of the chairs for those who have tickets.  The others are on the other side of those green trees in the center of the photo a couple hundred yards further up this street. The HD television truck was parked just to my right, as seen below. 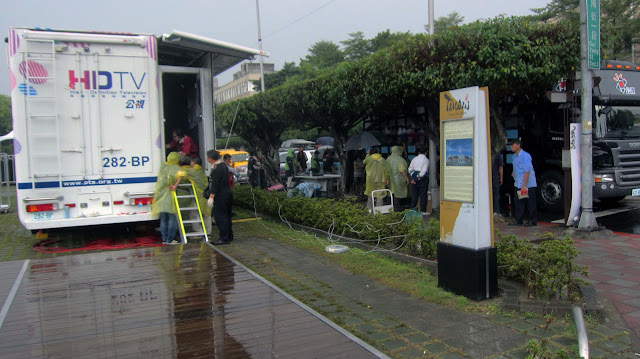 The HD television studio truck.  That number 282-BP is the vehicle's license number. If you look closely just under the trucks left red and orange tail light, is the van's license plate, same number.  I always wondered why they still require double markings on vehicles in this day and age?  I begin to walk north up the street. 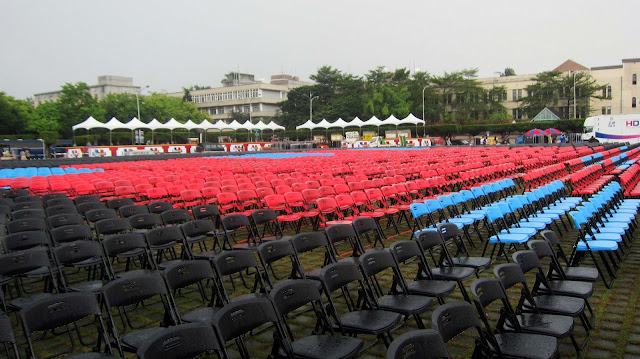 I looked back toward the corner I just took the above photos from.  Here is a better feel of the ground level seating.  It was still raining, not hard, but steady, my back and right arm were soaked.
I made my way past the small trees and into the next street. This street runs west from the old Gate that sits on Chung Shan South Road.  You remember, when you headed out south toward Taipei Air Station, you go around the old gate and if you look to your right you can see the Presidential Palace.  I was standing in the middle of that road.  It had been blocked off from traffic flow in the Presidential Palace area. 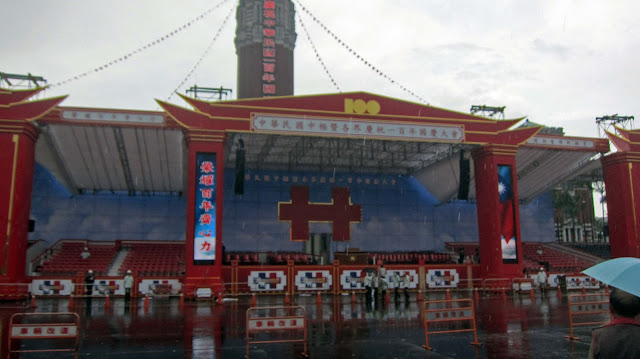 Here is the Reviewing Stand; with seating for dignitaries and invited foreigners. 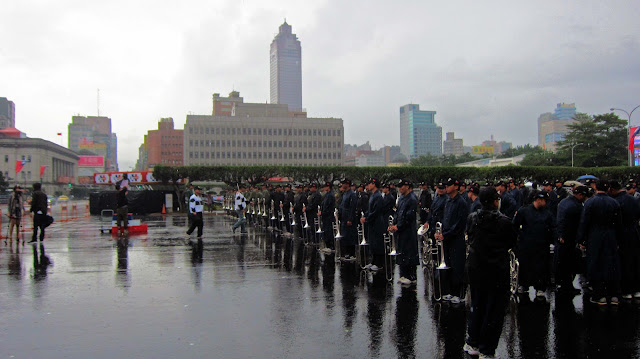 Just after I had stepped onto the street and taken a few photos, which was directly in front of the Presidential Palace, three  groups of men came marching in, first the Army on the far end, then the Navy in the center and lastly, the Air Force at this end.
How did I recognize who was who?  Colors.  The Army folks were in their old army green, the Navy folks in black jackets and pants and the Air Force guys, in their Blue Long Raincoats.  It kind of reminds me of how the US  military treated their folks back in the day.  Army, wear your poncho, Navy, rain gear, Air Force, rain coats and umbrellas. 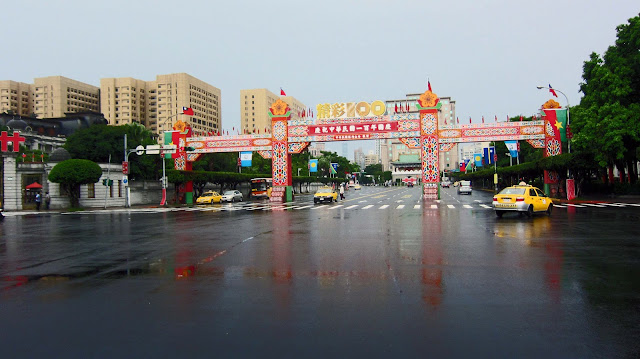 I stood around and listened to the combined band play the Taiwan National Anthem and one other song, with an accompaniment of a large choir.  They sounded really nice.
No one can get inside any of the government buildings today, so I headed east up the street toward Chung Shan South Road and the old gate, which is visible above, just up the road, with the green roof. Look on the corner, just on the left of this photo.  That is the Taipei Guest House.  Foreign heads of state, dignitaries, etc., who pay official visits to Taiwan are housed here. 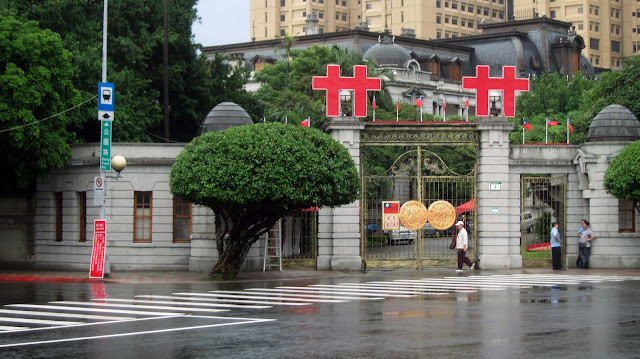 If they ever have an "Open House" here, at the Guest House, I would like to visit.  It must be a really nice home.  It's quite old, build by the Japanese I believe.
So, wet and hungry, I headed out to have some hot dumplings for lunch, before returning home to write up this blog post.
Let's wish Taiwan another 100 years of a freely chosen democratic government.....
Read about Double Ten Day in Taiwan HERE.
I'll be watching the festivities tomorrow morning on television.

Posted by Taipei Air Station at 12:10 AM