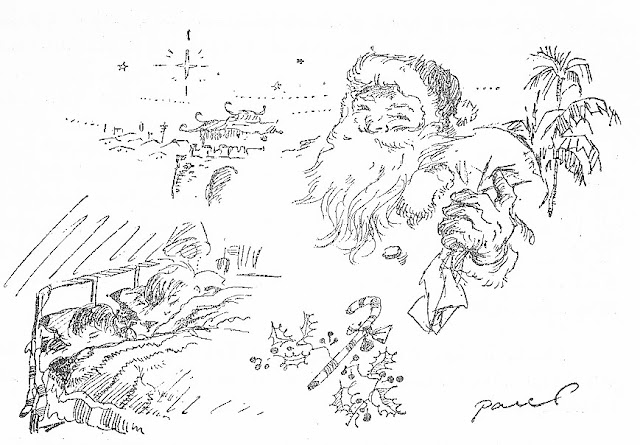 Visions of Sugarplums
This has been a wonderful holiday season so far -- so wonderful in fact that it almost scares me.     On Christmas Eve, when the lights of the city had died down and only the occasional merrymaker sped through the streets in car or pedicab, I wandered through the byways of Taipei and did some deep thinking.     And as I wandered on and on, I noticed that a number of homes bore wreaths in the window and some had Christmas trees still lighted although the house otherwise was dark. And as I walked along I saw the tricks that the night could play with your eyes, for I seemed to find the whole world aglow with the strangest light.     And it wasn’t until I had returned to my home and settled down for what was left of the night to sleep, that I realized that what I had seen – wasn’t seen at all, but had been felt.  Throughout the world that night there was a glow; a warming heat of friendship which lighted up the world with its being, and raised a halo of contentment.     Tossing on my pillow I thought of all the Christmas stories I had heard, and read and in turn had told to others.  I remembered the songs and carols and poems without number, and hundreds of thousands of people who must be singing them throughout the world.  And Just before I dropped off to sleep myself, I thought of the thousands and thousands of restless little heads that tossed on pillows too, unable to wait for dawning to break to bring the climax of the Christmas into light.     Those lucky, wonderful, beautiful kids – how long can we keep them believing in goodness, and happiness – and Christmas.     And soon it will be New Year and right after that comes the Lunar New Year, and between them we have the long period of holiday spirit which will continue despite wars and conflict and hatreds that lie between men today.    There may be a lot of things which serve to trouble us and to make us discontent with our lot, but somehow we should try to remember that our lot is a pretty easy affair compared to some people we have heard of.  How much of New Year or Christmas or anything else do those poor devils behind the Iron Curtain dare to have, or could have if they dared.     Yes, I suppose that there are some, even in the darkest parts of the downtrodden land who continue to worship.  I can remember one of the returnees telling me the story of how they continue the Buddhist worship as well as Christian worship in the Northeast of China.  How the society or brotherhood of Christian and Buddhist worshipers are chained in secrecy – not even daring to pass the news of this opportunity of communion to their fellow men for fear of admitting a traitor into the tight little circle.      There are many others who must “bootleg” their Christmas and New Year’s celebration, their prayers and their hopes.  But the days of such secrecy are gradually shortening, for with this year there seems to be more of hope and less of hopelessness, there seems to be more of daring to strive and less of  fearing to die, there seems to be more of encouragement and less of discouragement – there is more of faith and less of faithlessness.  That is why this year is bright, and why the New Year will seem happier.     Those lucky, wonderful, beautiful memories – how long can they keep us believing in goodness, happiness and – the New Year.

COPYRIGHT 1955 BY JOE BROOKSReprinted with permission

Joe Brooks writes of Taipei as it was in the mid 1950s when this article was written.
Find more information about Joe Brooks and this series of articles HERE
Posted by Taipei Air Station at 10:38 PM