Command Inspection of Taipei PMO Personnel in the 1970s

Today we tag along on an inspection of the Provost Marshall's Office at Taipei Headquarters Support Activity.  These are the first photos I have ever seen of any type of Command Inspection of personnel in Taiwan.   Your thoughts and remembrances  - please leave comments below.

I received a number of excellent photos from Arnold Houchin, an Air Force Captain who served at the Taipei Headquarters Support Activity (HSA) Provost Marshall's Office (PMO) in the mid 1970s.

Captain Houchin's description of his photographs:

"I'm the USAF captain with the PMO formation.

There are other Navy personnel from HSA in the background.

I think PMO was the only mixed service department at HSA.

At that point in time, the Navy didn't have a law enforcement rating and the closest they came was the Shore Patrol.

The Air Force and Army constituted the "professionally" trained police.

The Navy Master-at-Arms (MA) rating was just in its infancy. In fact, before I left Taipei, we got a MA Chief Petty Officer.

There were only about 18-20 PMO personnel in the photo since we needed to continue answering calls for police service and performing the Pass and ID function for ration cards, car licensing, etc.

As near as I can guess, the inspection took place some time between April 1974 and January 1976.  I did find the Admiral's name--Vice Admiral Edwin Snyder.

I can also recall a few of the names of USAF personnel in the formation if that would be useful.

The location of the formation was in the West Compound behind the Exchange Cafeteria.

It was a command inspection for the entire US Navy Headquarters Support Activity Taipei (HSA-Taipei).  Provost Marshal's Office and Taipei Armed Services Police were part of HSA, on assignment from Taipei Air Station--later Shu Lin Kou."

If you are in one of these photos, write to us and we can identify you.

You may have friends wanting to contact you.  Check our Taiwan Roster page HERE for other personnel who have checked-in and are listed on our roster. 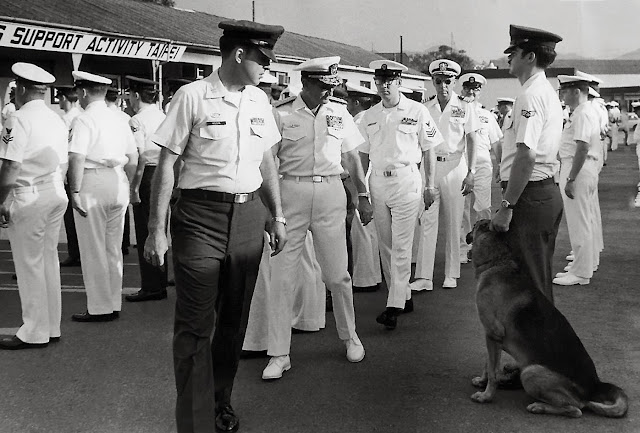 "As I recall we had two dog teams assigned to PMO.  One with a USAF handler and one a Navy Handler."

This photo above was a different Inspection, than the photos that follow.

This inspection was for the USTDC Commander,  Vice Admiral Edwin Snyder, shown in the above photo." The Navy Yeoman First Class following Admiral Snyder is taking notes, followed by Captain Grause and a Navy Chief Petty Officer.

All of the Navy folks in this photo, were wearing their "whites.


"I think this would have been a summer uniform inspection." 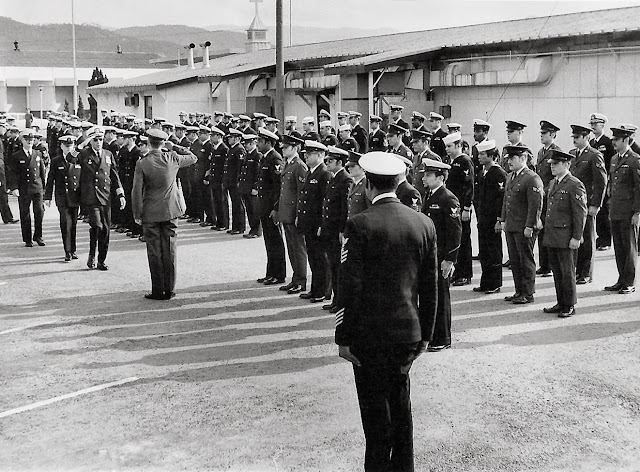 Everyone in formation, standing at attention, as the inspecting officer approaches.

Some time later or maybe earlier than the previous photo? 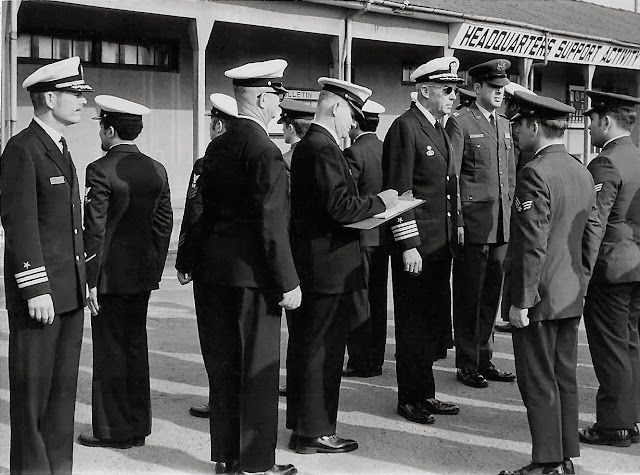 "Behind Captain Grause is a Navy Chief is taking notes and the HSA Command Chief follows. 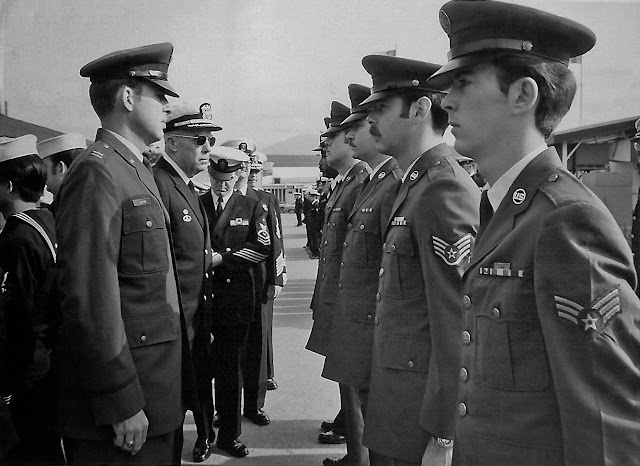 The Airman standing on the right, looks a lot like Clint Eastwood.


"Not Eastwood, but proud to have him nevertheless.
I believe his name was A1C Rose — in those days a three striper was an A1C.  Now a Buck Sergeant."

These were the days, wonderful Taiwan!

Have you got photos of your days in Taiwan.

Please write to us, taipeiairstation@yahoo.com