Today, we recall the bloody Japanese attack on our Hawaiian Islands.

Most remembered and most often seen in photographs and old movie reels was the destruction and carnage in Pearl Harbor and on Hickam Field.

Some, having never visited Honolulu, may not be aware, Pearl Harbor and Hickam Field are located side by side.

Today they are a "Joint Base" and no fence divides the two.

Japanese aircraft also attacked other areas on the island of Oahu as well.

To more easily read the newspapers, click each photo.

Today's edition of The Honolulu Star Advertiser can be found here.... 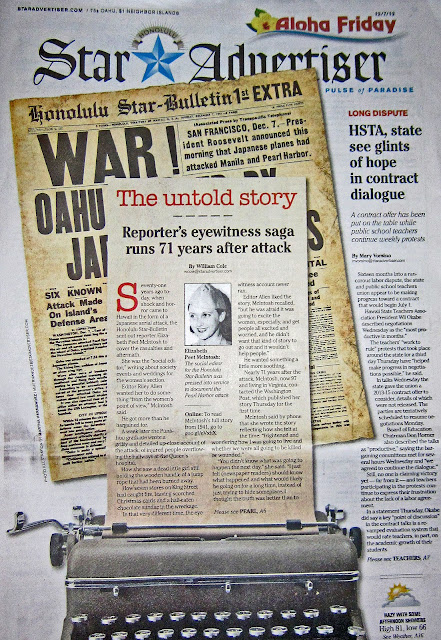 The Washington Post newspaper, published an article yesterday, December 6, 2012, cited in the story above.  The article can be found HERE.  It is an interesting read.

At the top of the Washington Post article, you'll see a photo of Ms. McIntosh which links to a video where she talks about writing the story for the Honolulu newspaper,  which lay unpublished until yesterday..

"Those Who Forget History Are Doomed to Repeat It."

Interesting. Please listen closely to the remarks of a 91 year old veteran who was at Pearl Harbor that Sunday morning, 71 years ago.

He states,  "our Navy was not the greatest Navy in the world compared to the Japanese."

Consider what we hear today regarding our military forces, does the statement from the Pearl Harbor veteran ring familiar?


Our country must remain overwhelmingly vigilant and STRONG at all times!
Posted by Taipei Air Station at 10:36 AM