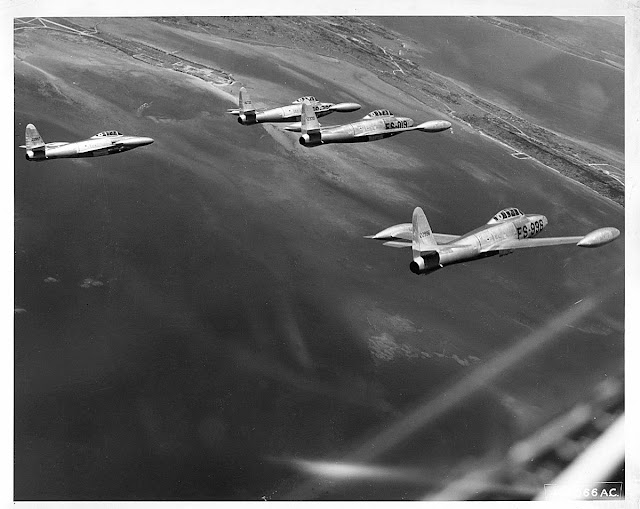 Photograph  courtesy of Rob at Stellar-Views.

2 July 1953 -  In this photo, the first shipment of Republic F-84 Thunderjets, in route to the
Nationalist Government of the Republic of China on Formosa is being delivered by the
U.S. Air Force. These were the first jet-type aircraft to be delivered under the U.S. Mutual Defense Assistance Program, photographed flying over Okinawa, destined for the island of Formosa.

A friend, Mr. Wang, recently wrote,  pointing a June 1953 Taiwan newsreel which captured the ceremony in which U.S. authorities turned over a number of F-84 aircraft to the ROCAF government.

The newsreel audio, in Chinese, was roughly translated by Mr. Wang:

Of all democratic countries that are anti-Communist and anti-Russia, Free China is a strongest base in South East Asia. While we're preparing retaking Mainland China, Taiwan's position is getting more and more important.

Under such circumstances and ambiance, jet fighters from American Military aid arrived at Free China again.

We believe The Republic of China and The United Stated of America will cooperate further more to defeat our enemy in common.

In air field, General Jou in full pilot outfit stepped in the cockpit first. US Embassy charge d'affaires ad interim Mr. Howard P. Jones (鐘華德) didn't want to be put aside and he also wanted to have a taste of flying high in the sky.

One after another, jet fighters took off rapidly. They were so fast that you didn't even take a good look at them and they flew away in front of you.

We believe one of these days we will see these jet fighters in action over Mainland China's airspace and let the enemy see how powerful we Chinese Air Force are.

Here's is the video which was filmed at Tainan Air Station. 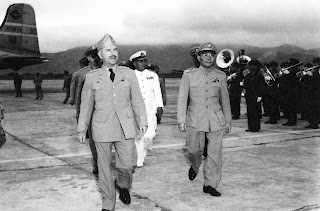 I would like to learn more about the delivery of the F-84G's from depots in Japan and the USA to the ROCAF - further their operations with the ROCAF. Please contact me at: pvde67@hotmail.com - thank you, Paul.