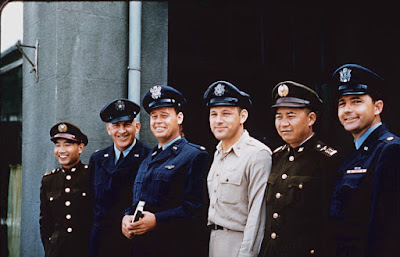 A dear friend has asked for assistance in locating some MAAG military officers she was associated with in Taipei during 1951 and 1952. This was some time ago, but one of you may had a lead on one of these folks.

Colonel C.D. Lewis, a fighter pilot in the European theater, arrived in Taipei in the fall of 1952. His home town is believed to be Spruce Pine, Alabama.

Major Sam Jones, also assigned to MAAG, left Taiwan in the fall of 1952 and returned to Charlotte SC.

Another is Major Gordon Parks.

These fellows and Ms. Baillard spent time together, "hung out," in Taipei and the surrounding area during 1951 and 1952.

Ms. Baillard was employed in the civilian community at Taiwan Trading Company which had offices on Chungshan North Road.

Ms. Baillard's mail to me closed with these words, "Any leads you might furnish would be more than appreciated."

Posted by Taipei Air Station at 11:09 AM